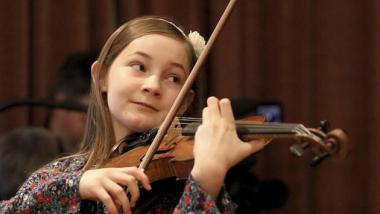 This is amazing. Alma Deutscher is a 12-year-old English girl who performed her own violin concerto, which she wrote at the age of 9, with Symphony Silicon Valley under Alasdair Neale at the California Theatre in San Jose on Saturday, Dec. 2. Amazing, yes, but it shouldn’t be that much of a surprise. Child-prodigy players of awesome talent may be heard at [email protected] every summer. Child composers of equal gift are not so common, but have appeared occasionally throughout musical history: Mozart, Mendelssohn, Saint-Saëns, Korngold. Why shouldn’t there be another one today, and why shouldn’t she be female?

Set the headlines aside, though. Deutscher, articulate and precisely spoken in televised interviews, wants to be judged, not as a juvenile freak, but as a composer on her own merits. Let’s consider her as such.

As a composer, Deutscher is, by her own declaration, a melodist, who believes that the purpose of music is to counteract and heal the pain and ugliness of the world. Melodies, attractive more for their distinct rhythmic patterns than for curvature of line, are the heart of her concerto. She favors simple sectional forms, well-joined without seams showing, and eschewing bloat. Her orchestration is light, with generous wind solos, and never overbalances the violin. Contrast is gentle, provided by changes in mood, rhythmic figures, or meter rather than by key juxtaposition. Themes are elaborated or extended, but don’t get put to much development, apart from one solid fugato.

Deutscher is thus an accomplished composer within her chosen idiom. Her idiom, most unusually for a composer of today, is that of 19th-century popular classics. The concerto’s harmonic language is diatonic and benign. Startling or unusual instrumental effects only appear occasionally. The dark-toned first movement sounds as if Mendelssohn had written his “Scottish” Symphony as a violin concerto. The slow movement and perky finale sound more French. So does the rhythmically energetic overture to Deutscher’s opera Cinderella, also played at this concert, which could pass for the overture to some lost light opera of the Second Empire.

The traditional tricks of the 19th-century violin concerto trade are all conventionally followed: display of sawing or trilling, soloist and orchestra trading off, cadenzas, and so on, all coming just as one normally expects.

This concerto doesn’t aim at deep or transcendent genius, but it also isn’t anything less than pleasant and attractive. Many pieces of this kind from the 19th century survive in the repertoire, and the fact that this one dates from 2015 should not be held against it. Still, it’s bland and anodyne enough that it’s hard to suspect it would be played if it weren’t a curiosity by a precocious child. Even so, even Mendelssohn didn’t write any of his mature masterpieces until he was 16, and Mozart didn’t reach full maturity until he was a couple years older than that. Perhaps Deutscher will gradually develop her own equivalent of the mature characteristics of the other works on the program, the vivid instrumental color of Ginastera’s Variaciones concertantes and the abrupt and profound shifts of temperament in Elgar’s Enigma Variations. I would like to check in with Deutscher in a few more years and hear what she’s writing then.

As a violinist, Deutscher is poised, with a smooth and even tone, a strong rhythmic line, and the ability to give character to her individual notes. She clearly likes her own music, and would bob her head along with it when not playing. Her encore, the Gavotte en Rondeau from Bach’s Partita no. 3, was plain and eloquent.

A word should be saved for Symphony Silicon Valley’s two new section principals who were among the soloists in Ginastera’s piece, effectively a concerto for orchestra. Cellist Evan Kahn displayed a liquid and yearning tone with strong vibrato, and flutist Sarah Benton picked a deliberate yet fluent way through fast runs. Neale led the whole concert at a slow pace with great dignity.

The 12-year-old composer has created a fully realized and worthwhile opera.