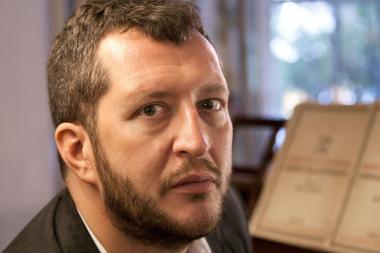 Another cancelled concert, another new release that is unintentionally filling the gap of what we’ve missed. British conductor-composer Thomas Adès — who at last is on the verge of fulfilling the greatness that has been long predicted for him — was supposed to have led the Los Angeles Philharmonic in his new Concerto for Piano and Orchestra April 2–4, but the coronavirus exercised its veto. Fortunately, the world premiere recording of the piece by pianist Kirill Gerstein, with the composer conducting the Boston Symphony (Deutsche Grammophon), came out a few weeks earlier. 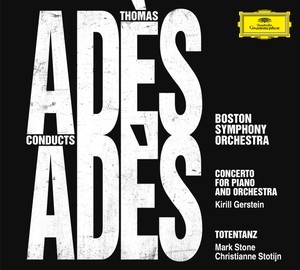 As heard from a stream, the concerto is a playful, showy delight in the usual fast-slow-fast, three-movement structure. It’s as if Adès, now on the cusp of 50, has arrived at the stage where he is prepared to face off with composers in the pantheon on their own terms. The piece is thick with virtuoso stunts that harken back to concertos of the 20th century — thundering octaves à la Rachmaninoff, jazzy passages that bring to mind Ravel, others that recall the Prokofiev concertos, passages of changing meters and rhythmic traps for only the most undaunted soloists. Gerstein, who recently conquered the nearly impossible Busoni Piano Concerto with the BSO, is one of these elite virtuosos, and he devours the piece.

The companion piece Totentanz (Dance of death), also a first recording, resembles Shostakovich’s Symphony No. 14 in that it is a vocal symphony of death using low male and female voices. But unlike Shostakovich, who wrote for 19 strings and three percussionists, Adès uses a massive symphony orchestra with a monstrous selection of percussion instruments, including a 60-inch taiko drum and five whistles.

Adès bases his Totentanz on an anonymous text found on a 1463-vintage cloth frieze from Lübeck’s Marienkirche — destroyed, alas, in 1942 by Allied bombers — in which the figure of Death dances between various forms of human life ranked in descending order from a pope to a baby. It’s a tough, often dissonant, sometimes ruthless score, reaching a peak of frenzy in “Death to the Merchant” when the whole band screams to holy hell for several bars in anticapitalist fury. Things calm down after that, and Adès even relaxes into some late-period Richard Strauss serenity (“Death to the Child”) before concluding with a desolate coda that dives as deeply into the bass as an orchestra can get.

The BSO polishes the score with a sleekness that is breathtaking (as opposed to the brasher LA Phil performance at Disney Hall in Feb. 2017), and mezzo-soprano Christianne Stotijn and baritone Mark Stone are the accomplished singers. The message is that everyone gets to dance with death sooner or later, no exceptions — which is not exactly comforting in these pandemic times.

A new CD offers a glimpse of the composer’s much-postponed multimedia collaboration with poet Saul Williams on issues of gentrification.

Caroline Shaw and PBO Make Magic on a New Disc

Anne Sofie von Otter, Dashon Burton, and Avery Amereau give voice to Shaw’s The Listeners and Is a Rose.