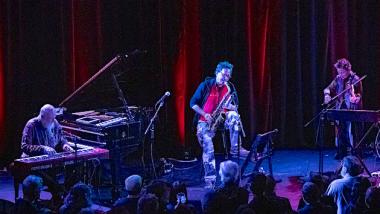 Terry Riley, Laurie Anderson, and John Zorn — three towering figures in U.S. experimentalism — don’t immediately spark an association among them. Before their latest two-night, four-shows residency of a sort at the Chapel on Valencia Street. they had collaborated exactly once, coming together on the occasion of Zorn’s 65th-birthday celebrations at the same venue in September 2018. The trio hit it off, and if the opening set from their current revival is any indication, we may not have heard the last from them.

The atmosphere at the Chapel — a hip venue, both intimate and airy with its vaulted ceilings — was one of vibrant expectancy as the sold-out audience assembled, a terse spring evening light lingering outside. It was a mixed crowd, for sure: reformed hippies recounting stories from be-ins past, a few harder-edged Zornians in faded Naked City shirts, socialites drawn in by the “it factor” of the evening, overheard wondering aloud: “Who is Terry Riley?”

And then it was music. The trio took the small stage, Zorn’s horn in the middle, flanked by electronic setups for Riley and Anderson on either side. Riley set things off on synth, carving out an idiomatically ambiguous space somewhere between a bolero and a prelude, highlighting his exploratory runs with sly smiles aimed at his conspirators. He was soon joined by Zorn’s plaintive saxophone lines, with Anderson providing textural support on electric violin. The smiling persisted, and as the group warmed up they began traversing a vast musical landscape, skirting around the edges rather than fully embracing any particular style or tradition.

Repeating passagework, whether electronically enhanced our produced through sheer mechanical determination, coalesced into clouds of sound that evoked the evolving atmospheres of Music for the Gift and Poppy Nogood; elsewhere more noisy and gestural moments prevailed, with Zorn displaying his credentials as lifelong improviser in the downtown New York scene through a kaleidoscopic range of squeals, sqwonks, and splatts. Yet even when things got loud — and they did — the feeling was always deliberate, coordinated; the engagement and attunement among the three was tangible, and as a result the audience remained connected through the 50-plus minute continuous escapade.

There are several ways to approach live improvisation from the audience perspective. The simplest (and perhaps best) is to shut down the desire to analyze what is being heard in real time, and simply follow along on the musicians’ journey. Yet the temptation to look over their shoulders, so to speak, can be hard to resist, especially with such a pedigree on display.

For the most part, the trio’s body language and clear individual expression rendered the onstage exchanges easy to follow throughout, but occasionally the use of live electronics to process the sounds de-coupled gesture from aural results and complicated the overall picture. Anderson’s violin, for example, appeared to be both delayed and pitch-shifted for extensive periods of time, meaning that often her bowing and plucking did not obviously correspond to the audible sounds. The effect, however, was mesmerizing, evoking the idea of a cubist string quartet shadowing her gestures. Riley’s sardonic approach to electronics further muddled the picture, as some of his synthesizer patches (including those deployed by an unidentified touch instrument he had laid on top of the acoustic piano) occupied a very similar sonic space to Anderson’s violin, leading me to wonder whether he was actually sampling and processing some of her own playing in real time. Whichever the means of production, the sensual side of things was always satisfying, if bewildering; it was just my curiosity as to how they might be doing it that ended up being frustrated.

Commenting on their return to the stage as a trio, Zorn mentioned their enjoyment of the Chapel as a setting, and their desire to blow the roof off the place. As the three locked into the occasional groove, relentlessly attacking it with ever-increasing intensity, the swelling sound mass threatened to make good on the promise. I looked around to a crowd of ecstatic stares and swaying abandon. I wasn’t sure when we were or where, anymore, but one thing I can say: it was good.

When Is a Gig More Than a Gig?