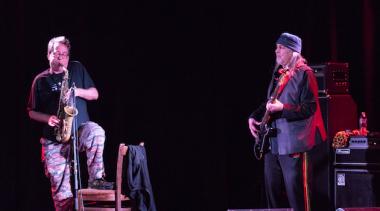 When Is a Gig More Than a Gig?

Trying to lull myself to sleep at night I often indulge in an extended fantasy that involves winning the lottery and financing a nightclub to present all the musicians I want to hear in interesting and unusual combinations. By the time all the money is gone, I’ve blissfully entered the land of Nod. Fred Barnes, the general manager at the invaluable Mission District venue The Chapel, is basically living out my dream, without the heedless cash burn-rate. While nonprofit organizations like SFJAZZ, Freight & Salvage, the Monterey Jazz Festival, and UC Davis’s Mondavi Center present artists in various lineups across multi-night engagements, The Chapel is virtually the only for-profit venue in the region that regularly offers thoughtfully curated residencies, like Bill Laswell ’s extraordinary series of eight concerts across five nights, Feb 4–8.

The bassist, producer, and inveterate creative catalyst is one of those uncategorizable artists who’s collaborated with a vast and disparate web of musicians, and The Chapel residency reflects his protean proclivities. The series kicks off Monday with two performances by Divination, a celestial power trio featuring the commanding jazz drummer Hamid Drake and multi-instrumentalist Laraaji, who first gained widespread notice with his hammered-dulcimer and zither work on his 1980 Brian Eno-produced album Ambient 3: Day of Radiance (Editions EG).

“None of these things are presented as something already touring; we came up with all of them,” said Barnes, who grew up in London hearing stories about the Railway Hotel, the club that his father Richard Barnes turned into a Mod hotbed known for nurturing The Who with a weekly gig in the mid-1960s. “The best part about it, it’s been driven entirely by enthusiasm for the music and wanting to create a cultural event for San Francisco first, then working out the logistics. Bill contacted me and told me about different things that he does. He has an enormous number of projects. We talked about different ones, people who hadn’t played in San Francisco for a long time, and put together this program.”

The day I interviewed Barnes, The Chapel announced another residency with four shows May 17–18 featuring alto saxophonist John Zorn, pianist Terry Riley and violinist/vocalist Laurie Anderson, a triumvirate that first came together for a sold-out night at venue last September. What seemed like a jaw-dropping one-off that added an exclamation point to Zorn’s Chapel residency celebrating his 65th birthday seems to have legs. Like Laswell’s run, the Zorn series exemplified what’s possible when a venue and an artist share a vision that extends beyond selling tickets.

“With Zorn, it was really important to him to make a program that he thought San Francisco needed now,” Barnes said. “I don’t know how many artists think in those terms anymore. It’s a very ambitious and wide picture of culture and music that’s kind of faded away. Part of what’s missing is that not many indie bookers and promoters seem interested in working with artists this way, creating a program that isn’t about promoting a product, an album.”

While the private-sector consolidation of the concert business seems to have stifled the creativity of presenters, the tenuous status of so many of the surviving indie venues facing rising rents makes risk-taking booking, well, risky. Peter Williams, the program director at Berkeley’s Freight & Salvage, spent a decade as the artistic director at Yoshi’s when the club’s signature engagement was an annual two-week run by piano great McCoy Tyner featuring a different all-star cast each week. He tapped Bay Area multi-instrumentalist and vocalist Barbara Higbie as Yoshi’s first artist in residence, a monthly engagement that launched on the ill-fated Thursday of Sept. 13, 2001.

Since he started booking the Freight in the fall of 2016 he’s been keeping an eye out for opportunities to take the venerable venue in new directions. Jazz guitarist Bill Frisell, a player renowned for wandering down many musical paths, provided the perfect opportunity. He checks into the Freight for a four-day residency at the end of the month, opening Feb. 28 with bassist Tony Scherr, drummer Kenny Wollesen and special guest Sam Amidon, a folky singer/songwriter who featured Frisell on his 2013 album Bright Sunny South (Nonesuch).

“What I love about this thing with Bill is that with a different band each show you can come back every night and hear something completely different,” Williams said. “He just does so much stuff. This is a chance to really see him stretch out and take chances. I love that this room gives me the chance to do that.”

Frisell is no stranger to Bay Area residencies. Along with Regina Carter, Jason Moran, and Miguel Zenón (who all happen to have been awarded MacArthur “Genius” Fellowships) he was part of SFJAZZ’s first crop of resident artistic directors (RADs) in 2013, a position that allows the RADs to present a variety of projects and ensembles over several four-night runs. The current crop includes Cuban pianist/composer Chucho Valdes, who follows the lifetime achievement celebration Thursday at the SFJAZZ Gala with three concerts featuring his band Irakere 45 (Feb. 1–3), vocalist Dianne Reeves (Feb. 21–24), saxophonist Joe Lovano (March 14–17) and San Francisco bassist Marcus Shelby (May 23–26).

Not that an artist needs to be tapped as a resident artistic director to spread his or her wings at SFJAZZ. Even back in the organization’s earlier incarnations as Jazz in the City and the San Francisco Jazz Festival, it made a point of presenting musicians in a series of varied settings (a model that SFJAZZ founder and executive artistic director Randall Kline says was inspired by the Montreal International Jazz Festival multinight showcases).

At UC Davis, the Mondavi Center has been presenting four-night jazz engagements in the cozy Vanderhoef Studio Theatre since shortly after the complex opened in 2002. The great Brazilian pianist André Mehmari performs with his trio on Jan. 30–Feb. 2, and rising vocalist Veronica Swift settles in with pianist Benny Green’s trio Feb. 27–March 2. But Jeremy Ganter, Mondavi’s longtime director of programming, says he’s looking at mixing things up, starting in April with piano master Fred Hersch.

A consummate duo partner who maintains an ever-expanding roster of interlocutors with regular stints at Manhattan’s Jazz Standard, Hersch is turning Mondavi’s Studio Jazz series into the West Coast outpost for his Fred Hersch and Friends format. His four-day run opens with a solo recital (April 10), and includes a piano duo with Larry Goldings (April 11), a concert with Los Angeles jazz vocalist Sara Gazarek (April 12), and an historic encounter with tenor sax giant Charles Lloyd. “It’s definitely a more intensive situation than we’ve done in the past,” Ganter said. “But it’s a logical evolution of the series.”

So why don’t more presenters design bespoke concert series, rather than presenting an endless stream of one and two-night gigs? Peter Williams argues that the problem isn’t only a lack of imagination on the supply side. He watched Bay Area audiences dwindle during the 2000 high-tech meltdown and 9/11 shock, and again with the advent of the great recession. While not downplaying the challenges presented by the current boom, he sees reason for optimism.

“I think things are changing again,” he said. “Five years ago, it would have been really hard to do something like this Bill Frisell residency. But it feels like things are picking up and people are going out and wanting to take some chances. I’m loving it.”

Joshua Redman and Ambrose Akinmusire highlight the final concert of SFJAZZ’s all-star tribute to the influential saxophonist and composer.