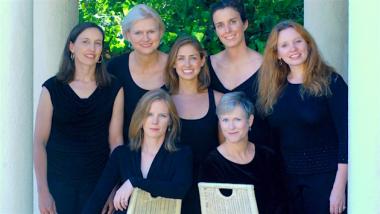 Not quite within the 12 days of Christmas, but close enough to New Year’s to be part of the holiday season, San Francisco Bay Area women's vocal ensemble Vajra Voices presented a series of soul-stirring concerts of mostly medieval music, under the auspices of the San Francisco Early Music Society (SFEMS).

The concerts, titled "Annus Novus: One Yeare Begins — Medieval Poetry, Music & Magic to Ring in the New Year," gave an idea of how the new year is “reflected in medieval texts as restoration after destruction, redemption after the fall, and radiant light springing forth out of darkness,” as Vajra Voices’ founder and director Karen R. Clark wrote in her elaborate program notes to the concert.

Since its debut at the 2010 Berkeley Festival, Vajra Voices has built a solid reputation and has recorded of the music of Hildegard von Bingen.

Last weekend’s concerts (I attended on Sunday afternoon at St. Mark’s Lutheran in San Francisco) fortunately included a generous helping of the music of this intriguing, 12th-century German abbess, composer, and mystic, as well as music by Perotin (c. 1200), Guillaume de Machaut (1300–1377), and pieces drawn from a collection of contemporary manuscripts from the Abbey of Saint Martial in Limoges, France.

Less than seven minutes into the concert, this led to the first high point: the organum Gaudia Debita (Joy is due for time’s orbit) which has the sopranos singing an ornate melody over a Gregorian chant melody sung by the mezzos

Karen Clark is a proponent of a body-oriented, physically expressive, and almost theatrical style of singing, and her group of exquisite vocalists (Allison Zelles Lloyd, Amy Stuart Hunn, Cheryl Moore, Lindsey McLennan Burdick, Phoebe Jevtovic Rosquist, and Celeste Winant), moves, breathes and sings as one, with a striking level of vocal artistry, unbelievable accuracy and precision, and an obvious delight in performing this kind of music in this unique ensemble.

Another moment of great intensity was Hildegard’s O quam magnum miraculum est (Oh, how great is the miracle), with Clark as solo voice, and a very sensual vielle accompaniment by Shira Kammen.

Kammen was also responsible for the instrumental intermezzos of the concert, together with Kit Higginson on recorder and psaltery, and occasionally assisted by Vajra Voices singers Allison Zelles Lloyd on medieval harp and Phoebe Jevtovic Rosquist on bells.

During the preconcert talk, Kammen briefly discussed what she called “the sport of medieval music” performance: the creation of instrumental pieces that are true to the style of the period. Only a few of them were written down and passed down through the centuries.

Her approach to this sport evidently works, because her lively arrangements, which she based on chants of Hildegard or on melodies from Machaut or the Saint Martial manuscripts, were wonderful and a natural, organic match with the rest of the program.

I found the program notes, the musicological research and scholarly work that went into preparing this concert all very interesting. But, as with all good art, this concert worked on every level: as a peaceful close to the holiday season, a meditative moment on a Sunday afternoon, or a class on medieval music.

Good art lifts you up, and motivates; makes you feel better about the world and about mankind. And such art, this concert was.

The women’s quintet strives to present beautiful singing in well-trained bodies, as they perform medieval music, to approach the “feminine divine.”

In a wildly entertaining, beautifully played program, the virtuosic early-music group Cançonièr brings to life one of the medieval period’s stranger social phenomena.