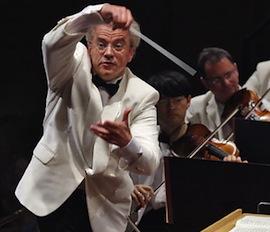 Ever since his first San Francisco Symphony appearance, in 2009, Osmo Vänskä’s return visits have been among the highlights of the Bay Area’s music season. The Finnish conductor, who has been music director of the Minnesota Orchestra since 2003, may not boast the high profile of some of his contemporaries. But his work with this orchestra is always exemplary.

Thursday afternoon at Davies Symphony Hall, Vänskä returned with a program of Russian and Finnish music, and the results were, once again, outstanding. Anchoring the program were Prokofiev’s Violin Concerto No. 1 in D Major, Op. 19, with Hilary Hahn as soloist, and Shostakovich’s Symphony No. 6 in B Minor, Op. 54. Vanska also conducted the first San Francisco Symphony performance of Minea by Finnish composer Kalevi Aho. Repeat performances continue through Sunday afternoon.

What is it, by the way, about Finland as a musical training ground? In recent decades, the country has produced a remarkable number of top composers, conductors and musicians. Perhaps it’s the weather, or tradition, or the country’s superior music education system; whatever the reason, Vänskä’s keen musical intelligence, fired by a vigorous temperament, is a sterling example of the national brand, and he conducted each work on Thursday’s program with a persuasive blend of insight and dynamism.

Hahn, meanwhile, is a splendid artist in her own right, and she and Vänskä made a formidable team in Prokofiev’s First Violin Concerto. Composed in 1917, the score didn’t receive its first performance until 1923 in Paris; it wasn’t a hit with the Parisian audience, and it’s never quite recovered in the public’s estimation. But Hahn evidently loves the work, and the petite violinist, looking Old World-glamorous in a full-skirted black and gold filigree gown, launched into the first movement with sweetly refulgent tone and unabashed lyricism. Under Vänskä, the Symphony’s violins sang eloquently, and the woodwinds made piquant contributions. The chilly music that ends the movement sounded exquisitely poised.

Hahn and Vänskä delivered a well-calibrated reading of the whirling, acerbic scherzo; the violinist, appearing characteristically unruffled, bore down in the daredevil passagework, while the conductor emphasized the movement’s transparent textures and sudden dynamic contrasts. Against the lumbering music for woodwinds that introduces the finale, Hahn played Prokofiev’s long melodies with ravishing grace and precision. To the end, Vänskä brought out a wealth of detail — the first violins’ crisp little lines have rarely sounded so assertive and well-defined.

Hahn returned for a single encore, Nico Muhly’s Two Voices for solo violin. Muhly, one of the hottest young composers in America, seems to be everywhere these days, and this short work was a stunning example of his compositional gifts — its slow, keening lines and jagged outbursts did evoke a kind of anguished dialogue.

Vänskä, summoning great waves of sound, conducted with tremendous vigor, and the Symphony musicians rose to the occasion with a powerhouse performance.

After intermission, Vänskä turned to Shostakovich’s Sixth Symphony. This is a gripping score — the Symphony hadn’t played it since 2008 — and Vanska mined it for every nuance. His reading was masterful, energetic and full of forward thrust but also weighty and atmospheric; the conductor never relinquished the pulse, yet he managed to create a vast sense of space. The Largo rolled out in commanding unison statements for violas, cellos, and woodwinds — somber, Mahlerian, thick and dark as molasses. The brass made searing contributions. The woodwind solos, played by Timothy Day (principal flute), Catherine Payne (piccolo), and Russ deLuna (English horn), were arresting.

In the scherzo, Vänskä employed exquisitely shaded colorations. The high spirits of the finale always come as something of a surprise — this is Shostakovich, after all — but Vanska never let its thrumming, tightly coiled rhythms come unglued.

The program began with Aho’s Minea. The title is a sly reference to Vänskä’s Minnesota ensemble, which commissioned the work and premiered it in 2009. Subtitled “Concertante Music for Orchestra,” the single-movement score employs huge forces, including quadruple winds and a large, hyperactive percussion group. It starts with spare harmonies and builds to a series of crescendos, and the inner voices — brooding strings, glowering brass, and vaguely Oriental themes for woodwinds — beguile the ear. Vänskä, summoning great waves of sound, conducted with tremendous vigor, and the Symphony musicians rose to the occasion with a powerhouse performance.