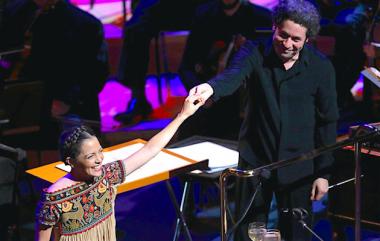 At a time when so much controversy and acrimony is being focused on illegal immigration, border walls, DACA “dreamers,” and sanctuary cities, Los Angeles is celebrating a citywide, multivenue festival (organized by the Getty) called Pacific Standard Time LA/LA. Its focus is the enormous role played by the cultures of Latin America, Hispanic, and local Chicano culture in the realms of art, film, dance, and music  — from ancient Mayan artifacts to balls-out rock ’n’ roll.

For its part, the Los Angeles Philharmonic and Gustavo Dudamel (who has made a commitment to the music of Latin America as part of his tenure as music director) is presenting a multiconcert series called CDMX: Music from Mexico City. The menu includes film music and contemporary compositions along with rock and crossover Latin artists like nine-time Grammy Award-winner, Natalia Lafourcade.

The program on October 12 at Disney Hall featured Lafourcade (dressed in the spirit of Frida Kahlo) performing her songs to the accompaniment of Dudamel and the full force of the Philharmonic. The result was enchanting especially for the numerous fans in the audience that were clearly familiar with every note of her music drawn from recordings like Casa (2005) which won the Latin Grammy for best rock album, and her debut album, Natalia Lafourcade (2002) for which she was nominated for Best New Artist.

So often when artists perform with a symphony orchestra the process simply involves adding a thick layer of gooey strings. That was not the case Thursday; quite the opposite. Each of Lafourcade’s song was given its own distinctive orchestration that featured a wide diversity of instrumental accents and enveloping tonalities. The orchestra was also supplemented by the five members of Lafourcade’s band: Cheche Alara (keyboards), Alfanso Garcia “Plon” (bass), Bernardo Ruiz Velasco “Lari” (lead guitar), Alfredo Pino (trumpet), Uriel Herrera (drums), and Gustavo Guerrero for a pair of high-floating vocal duets.

Ever since Dudamel made his debut with the L.A. Phil at the Hollywood Bowl on Sept. 15, 2005, it’s been clear that the music of Latin America was going to be a featured aspect of his programming. That opening concert combined “La Noche de los Mayas” by Silvestre Revueltas with Tchaikovsky’s Fifth Symphony.

Thursday’s concert began with a trio of contemporary compositions that climaxed with the world premiere performance of Téenek — Invenciones de territorio by Gabriela Ortiz. The title is a reference to the local language spoken in the Huesteca region of Mexico. But for Ortiz it is at the same time a reference to the diversity of peoples that contribute to the cultural tapestry of Mexico. Hence the piece’s various sections are distinctly different in temperament — from dark, shadowy, indigo night sounds with glimmering chimes and gongs, to Afro-Cuban dance rhythms accentuated by driving syncopations and pulsations. The resounding ending is reminiscent of the great “Mambo” dance number in West Side Story.

It takes a certain amount of brash imagination to base a musical composition on a soccer match. But that is exactly the structure of Enrico Chapela’s ínguesu. Inspired by the FIFA Cup match played by Mexico against Brazil in 1999 in Mexico City, it is a rambunctious, energy-filled piece that assigns the woodwinds to represent the Mexican team, the brass to the Brazilians, the percussion to the bench, the strings to the audience, harp and piano to the coaches, with the conductor acting as a whistle blowing referee. Conducted with humor and delight by Dudamel, the performance climaxed with the Venezuelan conductor issuing a Red Card and expelling a grumbling bass trombone player, John Lofton, from the stage!

The concert opened with a seven-minute composition by Javier Álvarez called Metro Chabanco (1988). It’s a hustle-bustle piece based on the activity surrounding one of Mexico City’s busy metro stops. Set to a minimalist pulse, it’s a colorful portrayal (Mexican composers are not afraid to use orchestral color) that put me in mind of John Adams, sort of “Nixon in Mexico!”

People ask why the L.A. Philharmonic is so successful. One of the reasons, in addition to adventurous programming, is the constant attention to the little things, such as dedicating a festive lobby decked out in Mexican folk motives, Day of the Dead figures, and wandering organilleros, festive Mexican barrel organ players. Before we set foot in the auditorium the mood had already been established.

Dudamel Whips Up the L.A. Philharmonic

Gustavo Dudamel led his Los Angeles band in an electrifying concert that included a new work with a Big Bang coda.

Los Angeles Philharmonic Music Director Gustavo Dudamel talks to the Los Angeles Times about his work in his native country of Venezuela.