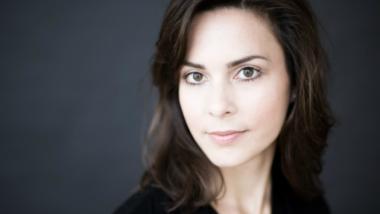 Indre Viskontas' Vocallective consortium teamed up with Oakland's Town Quartet and clarinetist Brenden Guy on Sunday for a program of music from the 1930s through the ‘50s — all thematically tied to the Palace of the Legion of Honor's "High Style" exhibit, which traces the evolution of fashion in the 20th century. The Legion Listening Series, a joint venture between San Francisco Friends of Chamber Music and the Palace of the Legion of Honor, has been using the exhibit as the inspiration for its recent concerts, and Sunday's performance focused on a period of time that was considered the high point of creative expression in fashion.

The concert was held in the Rodin Gallery, a room made of hard surfaces featuring acoustics that are more unforgiving than Mr. Blackwell. All of the music had American connections, including works by stalwarts Aaron Copland and George Gershwin as well as pieces composed by Sergei Prokofiev, Darius Milhaud, and Kurt Weill.

Viskontas is a performing soprano who also holds a Ph.D. in cognitive neuroscience, is a professor at the San Francisco Conservatory of Music, and teaches Biological Psychology at the University of San Francisco. Guy's schedule is also pretty busy: He's the founder and artistic director of the Curious Flights ensemble and music series and has performed with the Berkeley Symphony, and the Magik*Magik Orchestra among others. The members of the Town Quartet (violinists Corey Mike and Mia Bella D'Augelli, violist Ivo Bokulić, and cellist Lewis Patzner) have their roots in Mills College and the S.F. Conservatory of Music. An easy camaraderie between the musicians was evident and the challenges of the room and the steady stream of noise entering the space from the museum's surrounding rooms and corridors seemed not to bother any of them in the slightest.

An easy camaraderie between the musicians was evident and the challenges of the room and the steady stream of noise entering the space from the museum's surrounding rooms and corridors seemed not to bother any of them in the slightest. However, many of the music's nuances were lost as the sound echoed off the galleries’ marble and brick walls and rounded ceiling, competing with chatty audience members.

Still, the two-hour program worked and had some impressive moments. The Town Quartet handled Prokofiev's String Quartet No. 1 in B Minor and Darius Milhaud's String Quartet No. 12 with a mixture of respect and reverence, especially the Milhaud. Patzner introduced both, noting Prokofiev's nod to Beethoven (most obvious in the Allegro, which owes a debt to Beethoven's Op. 135) and the deliberate difficulty of the piece's key before the group dispatched it with little noticeable exertion. The quartet's communication was fluid and alert.

Viskontas commissioned Noah Luna for an excellent arrangement for soprano, clarinet, and string quartet of six of Copland's settings of Emily Dickinson's poems, beginning with "Nature, the gentlest mother" and culminating with "The Chariot." It was only half of the original set of poems Copland composed, and it would be well worth hearing Lima take on the entire dozen. Noting the room's tendency to "boom," Viskonatas read the poems aloud using a microphone prior to performing them, a practical consideration for the audience but one that slightly stole from the overall impact. They should be performed straight through.

More successful from a performance perspective were Elaine Fine's magnificent arrangements of Weill and Gershwin songs. The Gershwin tunes, especially "Summertime," gave Guy the space to create some exquisite melodic moments. Viskontas possesses a natural affinity for Weill, evident in the contagious pleasure she took in singing "I'm a stranger here myself," as well as "Je ne t'aime pas," both from the score of  One Touch of Venus. It would have been wonderful to hear all of it in a more acoustically friendly setting.