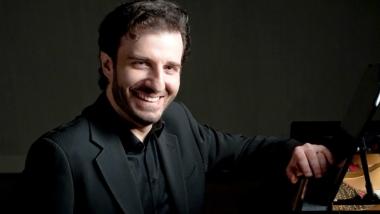 On April 24, 1915, authorities of the Ottoman Empire rounded up approximately 250 Armenian civilians living in Constantinople (now Istanbul) and deported them to the center of Anatolia. That day, sometimes referred to as Red Sunday, is commonly viewed as the beginning of what became the Armenian Genocide, during which hundreds of thousands of Armenians perished.

Last Sunday, the Fresno Philharmonic commemorated the centenary of the Armenian Genocide with “Witness and Rebirth: An Armenian Journey” at San Francisco’s Palace of Fine Arts.

The concert featured orchestral works by Armenian composers, beginning with Aram Khachaturian’s “Adagio of Spartacus and Phrygia” from the ballet Spartacus. Sixty-plus years after its composition, the melodramatic lushness of the score sounds more cinematic than balletic, a quality magnified by a lack of crispness in the orchestra’s tone under conductor Theodore Kuchar. I’m not sure whether it was the Fresno Phil or the space at the Palace of Fine Arts, but the orchestra’s tone was warm yet antiquated.

When Catherine Manoukian joined them as the soloist in Khachaturian’s Violin Concerto, the orchestra’s sound reminded me of Toscanini’s recordings with the NBC Orchestra. The concerto places most of its demands on the soloist’s endurance rather than technical abilities, but Manoukian handled its rhythmic drive with undisguised enthusiasm and aggressively sliced her way through the first movement’s cadenza.

However, Manoukian’s best moments were still ahead of her. After the orchestra’s string section fell in sync with her during the second movement, she displayed an impressive amount of stamina and consistency of tone in the repetitive third movement.

After the intermission Anna Hamre led the Fresno Master Chorale and Fresno State Concert Choir in focused, splendid performances of liturgical pieces by Makar Yekmalian and a portion of a requiem by Alexander Arutiunian. The combined choruses featured a number of excellent sopranos and baritones whose voices rose clearly and rang through the hall. Though a relatively brief portion of the program, this was a concert highlight.

The centerpiece of the program was the world premiere of Serouj Kradjian’s Cantata for Living Martyrs, a three-movement work for orchestra, chorus, and soprano. Kradjian’s wife, Isabel Bayrakdarian, a singer of formidable talents whose appearances have regrettably grown scarce in recent years, sang the soprano part. In his program notes, Kradjian describes his cantata as “an emotional journey through one of the bleakest periods of human history, [which] touches upon three distinct images of man’s inhumanity against man...”

The work fervently expresses the horror and injustice of the historical record and its fraught legacy. The first part, “The Dance,” begins with the orchestra illustrating a vibrant community, percolating brightly. Quickly the bubbling is overtaken by a mass of minor chords, and the terror begins as the chorus starts to sing in quick, dark bursts.

Kradjian has a flair for this kind of narrative composition: The wind section illustrates pursuit, percussive thwacks accompany the words “whips cracked,” as the society depicted in the opening faces a massacre. Almost as soon as she began to sing, Bayrakdarian proved she still has it — her voice has retained its warm tone and her enunciation was clear.

Without diminishing the atrocities he’s depicting in any way, it’s fair to say Kradjian’s score and text veer clumsily into melodrama  with lyrics such as “Then with a torch they set their naked flesh on fire. Dance! Dance! Dance! Dance!” while the score underlines every syllable. A truthful depiction, no matter how cathartic, is no guarantee of an artful depiction.

“I Bless You,” the text of which is based on a memoir by Azam Haigaz, depicts a mother sending her son off to safety. In this quieter section, Kradjian’s skills shine, especially as the ominous, agitated music gives way to a hush as the woman sends her son away with a final “Go…!”

The third part, “Denial & Rebirth,” has a text by William Saroyan. The movement begins with the words “There was no genocide,” and in this one moment Kradjian absolutely nails the abject horror of the historical record in words and music. However, and I’m not sure it could have been any other way, as the movement progresses toward “rebirth” it is overtaken by the sentiment of Saroyan’s poetry. It worked for the audience, providing a cathartic conclusion.