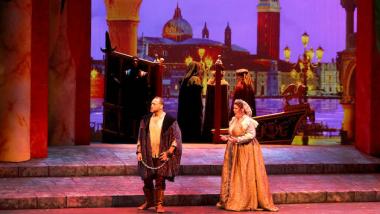 Even in the snug confines of Palo Alto’s Lucie Stern Theatre, Verdi’s 1844 opera I due Foscari has a grand feel in West Bay Opera’s resourceful production (through Feb. 24). The action opens in 15th-century Venice, with a sonorous, somber, and stage-filling male chorus. Members of the imposingly robed Council of Ten are mulling the fate of the hero, Jacopo Foscari, wrongly accused of murder and threatened with exile. For dramatic extra measure, Jacopo is the son of the Doge, who is charged with passing judgment on his beloved offspring.

These two Foscaris of the title are locked in a tragic clinch of family and politics, the personal and political. Francesco Maria Piave’s libretto is freely adapted from a play by Byron.

Director Richard Harrell, in consort with his design team, has fashioned an expansive environment for the piece. The wonderful projections, by Frédéric O. Boulay, conjure the gilded splendor (and gloomy dungeon depths) of the Doge’s Palace as well as the striking contours and watery deep space of Venice in the distance. The city’s emblematic winged lion serves as a powerful visual motif. Peter Crompton’s well-judged set pieces, Steve Mannshardt’s moody lighting and Callie Floor’s fine costumes merge in an impressive mise-en-scène.

But grandeur only matters in opera when animated by the intimate and convincing force of human emotion. In scene after scene, Verdi delivers arias, duets and ensembles aimed at doing just that. Musical motifs etch the distinctive imprint of the principals.

While some of this feels dutiful, especially in the somewhat blunt and episodic first act, Verdi’s vocal lines take hold again and again, soaring here, tangled in transverse motion there, united in sturdy a cappella intervals. Cut away the Venetian trappings, and I due Foscari is a simply but intensely drawn musical portrayal of an agonized father, a wrongly accused son, and the son’s tormented wife, pleading for mercy.

The strongest leg of this triangle at Sunday’s opening-weekend matinee, was tenor Nathan Granner’s superb performance as Jacopo. Right away, with his Act I paean to Venice and his quest for liberty, Granner brought a defiant, heartbreaking earnestness to the hero’s plight. His voice, full of potent fiber and feeling from top to bottom, captured both suffering and the “sweet hope” of aspiration — even a slightly strained reach for a high note felt like part of his struggle.

With his hands chained together and gestures limited, Granner mustered both physical and vocal complexity to the part. He was vulnerable and proud, defeated yet determined. The singer was especially fine in the second act, the opera’s strongest. Seemingly near death in the dungeon, he was pulled back from the brink first by a duet with his wife, Lucrezia (soprano Christina Major) and then by a wrenching encounter with the Doge (baritone Jason Duika).

Regrettably Duika had come down with a vocal ailment as Foscari launched on Friday night. His singing was fractional at best on Sunday, well short of even marking his part. It was commendable of Duika to go on at all, and not send an audience home without the many pleasures this production of a Verdi rarity offered. But it was also hard to witness a singer in such a restricted and tentative mode and not fear for him doing further damage to his voice.

Major made the opposite impression. She sang at full voice, shading into shrillness at times, and without much nuance. Her static acting didn’t help. Bass baritone Benjamin Brady was an appropriately ominous Loredano, the story’s unyielding law-and-order figure.

West Bay’s general director José Luis Moscovich was in the pit, where he led an admirable reading of the orchestral score while ably marshaling the large complement of singers. The reduced scoring showed off some keen and tender passages by the woodwinds, most notably, as well as the strings.

I due Foscari, which follows the more frequently heard Ernani in the Verdi chronology, may not be a major work. But it is eminently worth hearing, as other companies have affirmed from time to time. A 2012 Los Angeles Opera production featured Plácido Domingo as the Doge. Concert versions crop up as well, a testament to the vivid highlights of the motivic score.

West Bay Opera deserves high marks for taking on a piece that isn’t likely to turn up very often — this is apparently a Bay Area premiere — and doing it with such conviction. There was value added everywhere, from Granner’s sterling turn as Jacopo to the projections and orchestral finesse. A pair of dell’arte-clad break dancers (Hien Huynh and Nathaniel Moore), who opened the Act III gondola race scene, supplied another bright note. Nothing, including this sly anachronism, seemed gratuitous. Back there among the masked celebrants somewhere, the sinister Loredano lurked, waiting to bring down the hammer on both father and son.