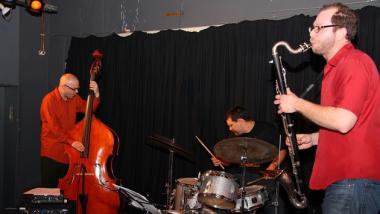 Up front in the intimate, user-friendly ambience of the Bird & Beckett Books and Records store, the avant-garde, Chicago-based jazz trio Locksmith Isidore felt like a chamber music experience. That’s if the chamber were open to the wild elements of nature.

Leader and bass clarinetist Jason Stein, upright bass player Jason Roebke, and drummer Mike Pride progressed in conjoined purpose through the six long numbers over the course of two sets but, enhanced by the store’s fine acoustics, also sounded clear in their individually unique articulation of their instruments. The small and attentive audience, seated in folding chairs between the walls and shelves of books, consigned themselves late on Friday evening to the exotic journey, on which the ride was at least as exciting as the scenery.

Save for one piece by John Coltrane, the material was Stein’s, much of it from After Caroline, the album about to be released by Locksmith Isidore on the Northern Spy Records label. (The band’s moniker is drawn from the given name and trade of the clarinetist’s grandfather.) On the opener, “As Many Chances as You Need,” all three players revealed some of what they chance in order to make their kind of music. Roebke’s dynamic plunk drew out the woodiness of his instrument, in the manner of the late Charlie Haden, whose octave rocking Roebke also echoed. Pride rubbed his drumheads to evoke squeaks. Stein put a burr on his tone by overblowing, and in the upper range of his instrument evoked the sass of Artie Shaw.

Stein talks through his bass clarinet, an effect that was further confirmed on “Eckart Park,” on which his breathy phrasing was evocative of the late, progressive saxophonist Ornette Coleman, as was the music’s elusive tonal center. Pride set an energetic, moderate post-bop swing pace with trap and cymbal, at times sounding tonal paradiddles on trap and snare. Roebke sometimes plucked with both hands, and elsewhere arco-ed below his bass’s bridge. Stein’s own extended techniques included slap-tonguing and key clicks, widening his dramatic and emotional expression.

“26-2” (written and recorded by John Coltrane in 1960 and released posthumously, a decade later) arguably brought Stein closest to a discernible melody line, and the ensemble as a whole closest to traditional jazz compositional structure, doing artful homage to the song’s creator. Solos were also easier to distinguish, and the audience responded with applause to Pride’s athletic outing. On the likeable original “Ida Like,” the ensemble returned to their dazzling trickery, Roebke invoking with his bow the sound of a creaking door and Pride pounding his set with a mallet held in one hand, while blowing into a length of PVC held in the other. Stein conveyed the sound and spirit of wild animals scampering in wild winds.

Intermissions at Bird & Beckett are always a pleasant opportunity for crowds to mingle with the musicians and each other and to purchase souvenir CDs and share the alcohol they bring in with permission of the benign, jazz-loving shopkeeper Eric Whittington, who solicits tips for the performers and announces the upcoming music and poetry calendar, arguably stronger, more varied, and more accessible than any in the Bay Area. The store, which has hosted monthly showcases for students from the San Francisco Conservatory of Music’s Roots, Jazz, and American Music program, is also a participant in Jazz in the Neighborhood’s Guaranteed Fair Wage Fund, which supplements payment of performers.

The first of the second set’s two, long original pieces, “Walden’s Thing,” was another upbeat post-bop frolic, which began and ended with repeated arpeggiated runs by Stein. Although this and most of the rest of the material is included on the new album, you could be assured that no two performances of any number are identical, and that each is a new and vital experience meant to be shared with, rather than to impress, a live audience.

It was a marvelous charge of raw energy to take back out in the eleventh hour onto the quiet streets of Glen Park.

The Beninese jazz guitarist and his transnational cohort feed off each other at Yoshi's.