Is there a classical performer more keenly attuned to the moment than the cellist and musical ambassador Yo-Yo Ma? When the coronavirus pandemic broke out in March, Ma launched a participatory social media project (#SongsOf Comfort) that’s tapped a deep need for music as a unifying force in these isolating times. The performer’s ongoing performances of Bach’s Cello Suites around the world have seemed similarly soulful, global, and essential.

Never content to stay in any narrow lane, Ma has been crossing borders for decades. As a driving force in The Silk Road Project (now Silkroad), he brought together musicians from widely diverse ethnic regions and traditions. He’s collaborated with scores of artists, from Astor Piazzolla to James Taylor, in other ways.

Now, in a reprise of the 2011 Goat Rodeo album, Ma has reunited with fiddle player Stuart Duncan, mandolinist Chris Thile, and bass player Edgar Meyer on the drolly titled and winningly big-hearted Not Our First Goat Rodeo. The Sony disc features the gently infectious singer Aoife O’Donovan on three of the album’s 10 tracks. 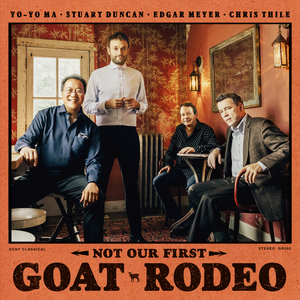 A “goat rodeo,” according to Urban Dictionary, involves so many “individual screw ups” that “there is no hope in stopping the mess.” Instead of giving into chaos, Ma and his collaborators cheerfully embrace their musical differences to varied, often delightful, and occasionally wayward effects.

The vitality kicks in right away with “Your Coffee Is a Disaster,” all jittery, jangly plucks and shivers set off by wails of protest from the cello and fiddle, smoothed out later on by some creamy harmonies. The number feels both cunningly designed and loosely improvisatory, a well-made brew that’s allowed to go awry a bit.

Contrasts are the order of the day as this Rodeo capers and cavorts along. In “Waltz Whitman,” which follows “Coffee,” Ma spins out a long lyrical line that graciously yields to Duncan’s twangy bluegrass leanings. Something happens in the alchemy of the two, a sense of tenderness and aspiration that whispers out a message of hope.

Another gratifying juxtaposition comes later on. In “Not for Lack of Trying,” a plaintive keyboard riff gets a series of searching responses from the other players. A stubborn melodic cell tries and tries again to gain footing, with only repetition to show for it. The number is a portrait of striving futility, a game struggle to budge an immovable object.

And then with “Voila!” it’s all easy, toe-tapping flow, complete with a swing through the neighborhood of “Turkey in the Straw.” So what, the song cheekily answers “Not for Lack,” was so hard about that?

O’Donovan, harmonized here and there by the other players pitching in on vocals, lends a soft, enticing sheen to her passages. The beguiling “We Were Animals” fulfills its own testimony that this “feels like a song from the earth.” Intriguing but less successful is the ironically titled “Every Note a Pearl,” in which the open harmonies seem to slide and degrade into something dark and murky.

Goat Rodeo never comes close to the pulling-every-which-way willfulness of its title’s implications. Instead it lets its individual players show their own qualities, then prove how well they cohere and coalesce into a choice, unpredictable conversation. What on one cut is a sunlit dream song (“The Trappings”) becomes on another a feverish preoccupation with a rapidly repeated note (“Nebbia”).

But wait, just when you think that latter number is stuck in its fixed groove, a skein of long, languid phrases arises from the pileup. Here the play of opposites becomes a moving, hard-won acquiescence, not unlike what happens in the slow movement of Beethoven’s Piano Concerto No. 4.

Lovely and light-fingered as it often is, this second Goat Rodeo also takes some daredevil rides into the unknown. As Ma has often demonstrated, music that takes risks can pay handsome rewards.

The cellist gives a marathon performance of Bach at the Greek.

Ma, Meyer, and Thile Engage in a Thrilling Musical Discussion With Bach

The trio’s peerless musicianship and their unusual combination of cello, bass, and mandolin result in fresh interpretations of classic material.