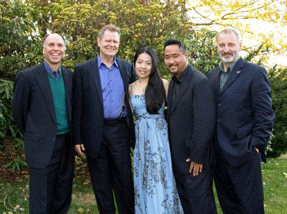 Take a well-established, internationally acclaimed string quartet and add a brilliant young pianist who was not even a glimmer in the eyes when the quartet was founded. Throw them in a 100-year-old ballroom of a Tudor mansion, fill it with an audience elbow-to-elbow, then shake things up a bit. What cocktail could you possibly end up with? Such was the recipe of the sold-out concert at Kohl Mansion Sunday evening of San Francisco’s own Alexander String Quartet with the renowned pianist Joyce Yang.

The piano quintet repertoire is rich and diverse, and is heard on a regular basis, to the pleasure of chamber music lovers. However, just as concerto soloists may only have one rehearsal with the orchestra before a performance, quintet ensembles seldom have the time to gel to create a cohesive, unified performance. As a result, the stage too often becomes a battleground of the quartet waging a war against the pianist, or the ardent teamwork of the quartet being met by an indifferent pianist.

The ongoing collaboration between the venerable Alexander String Quartet and pianist Joyce Yang is a rare exception to the cliche. They have been performing together for several years, and have just recorded Schumann and Brahms quintets on a soon-to-be-released CD. Second violinist Frederick Lifsitz even shared with the audience a story that, mere weeks after the quartet performed with Yang for the first time, she called them and asked them to perform with her at her Juilliard School graduation recital. Even by the stratospheric Juilliard standards, it was rare to have such an established ensemble perform with a student, but they had fallen in love with each other. Of course, it helped that Yang was already well on her way to her international stardom after winning the Silver Medal at the 2005 Van Cliburn International Piano Competition, along with an award for Best Chamber Music, at age 19.

On Sunday, the mutual affection and respect between the quartet and Yang were evident in their performance of the titanic Brahms Piano Quintet, Op. 34, in F Minor. From the opening in unison to the passionate, angst-laden first theme, their vision was as one, singularly focused on the drama and story. Yet, as the music progressed, individual voices and characters were quite evident and leaped out of the tapestry, creating an illusion of vivid three-dimensionality. At the recapitulation of the first moment where the first theme returns, it was as if the floodgates of angst had burst open, creating its own climatic moment, with the air resonating and shivering in desperation. With every phrase and every breath, layers upon layers of passionate energy were laid down, creating an edifice of massive proportions.

Throughout the work, Yang possessed an unusually high level of clarity in her sound.

The intensity did not relent in the calm but simmering passion of the second movement. In the opening, Yang led with richly colored thirds in the right hand, until the quartet joined her in harmony. The most stunning aspect of the moment was the perfect match of timbre among the entire ensemble. Even though the piano is technically a percussion instrument, Yang laid down exquisitely timed, luxuriant lines that betrayed the presence of hammers inside her instrument. Instead, the strings in the Steinway were caressed and teased to create a blossom that meshed exquisitely. The quintet was on fire by the third movement with full orchestral colors, and a daring exuberance, shared equally among the five, possessed symphonic coloration and dynamics. The work could have been orchestrated effectively, as Arnold Schoenberg did with Brahms’ Piano Quartet, No. 1, Op. 25, but the sonority that the quintet created, particularly in the immersive environment in an intimate setting, lacked nothing in color, dynamics, and intensity; rather, it possessed a level of fresh immediacy that no symphonic orchestra could create.

The evening began with a colorful yet loving reading of Schumann’s Fantasiestücke, Op. 12, one of three works so titled. Here, Yang was probing vivid colors and emotional extremes depicted by Florestan and Eusebius. The opening Des Abends depicted dreamy colors, reminiscent of a slowly rotating kaleidoscope, and was followed by a passionate and exuberant reading of Aufschwung. The manic Eusebius and contemplative Florestan were engaged in effervescent conversations.

The focus with unified vision among the members was the epitome of chamber music. Not a note went astray.

Throughout the work, Yang possessed an unusually high level of clarity in her sound. Schumann was very complacent in writing pedaling instructions, with just a “pedal” at the beginning, but Yang was judicious in its use, emphasizing its use for distinct colors rather than blurring them. Combined with her masterfully dexterous fingers, inner textures were brought out clearly. Yang also captured the essence of the bipolar interactions between the two characters, particularly in the whirlwind Traumes Wirren where Florestan interrupts Eusebius ever so sweetly, but perhaps with some slapstick humor as well. The Finale was grandiose, filled with jovial and sometimes drunken colors, almost evoking the “Shrovetide Fair” movement in Stravinsky’s Petrushka: a parade of merrymakers.

The Alexander String Quartet had its triumphant moment too, with a driven rendition of Benjamin Britten’s tragic String Quartet No. 2 in C Major. From the perfect unison in the opening in C major, then blooming into D major, the focus with unified vision among the members was the epitome of chamber music. Not a note went astray, the colors and textures were distilled into a singularity, yet the form was organic, constantly evolving, pulsating with life.

The reading of the second movement was poignant with textural murmurs punctuated by probing and panic-stricken dance movements, but the real substance of the performance rested in the last movement, “Chacony.” Through its 21 variations of the brief nine-measure theme, there was an undulating landscape of emotions, pastoral at times and melancholic at other times. Each of the solo cadenzas gave opportunities for closer inspection of different emotional states with freedom for exploration.

I truly hope that the collaboration between Joyce Yang and the Alexander String Quartet will continue, as it’s a match like no other.

Yet the defining moment of the performance came in the long climb to the climax toward the end of the movement. With solid thematic lines and fluttering tremolo crisscrossing their paths, the arrival at the enormous C-major chords was triumphant and destructive at the same time. The quartet delivered a vivid narrative of the struggles, devastating losses, and the eventual triumph that came at too great a cost during the Second World War, which inspired the piece.

The quartet noted that the concert itself was also a release party for the aforementioned CD, soon to be released. As a teaser encore, the quartet and Yang gave a particularly exuberant and thrilling rendition of the Scherzo movement of Schumann’s Piano Quintet, Op. 44. If the performance was any indication of what is on the CD, it should be on the shelf of all chamber music lovers. I truly hope that the collaboration between Joyce Yang and the Alexander String Quartet will continue, as it’s a match like no other.