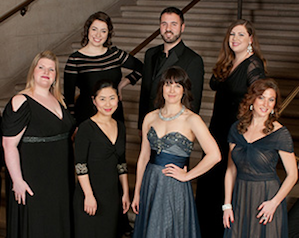 San Francisco Chamber Orchestra offers free admission to their concerts, but that's not the main draw to its concerts. On Friday night at Herbst Theatre, it offered a balanced program featuring a slate of well-cast vocalists from the San Francisco Opera's Merola Program for young artists, as well as a new work of monodrama by local composer Gabriela Lena Frank. The orchestra’s music director, Benjamin Simon, conducted.

Gabriela Frank’s work for narrator and chamber orchestra, Journey of the Shadow, sets a children’s story by Pulitzer Prize winner Nilo Cruz, who was in the audience. Frank’s motherly delivery, combined with the music’s often-literal tone painting, gave the piece an accompanimental quality. At phrases such as “he leapt into the air” the flute would perform a leaping melody, and every mention of the word "war" brought with it an onslaught of harsh, cutting chords.

Frank’s music was most successful when she halted the mimetic tone painting and went for more expansive, often dancelike, musical development. Although some of Cruz’ metaphors are a bit heavy-handed — perhaps resonating more with children’s literature editors than with children themselves — the work could succeed in educational concerts. I hope some animator gets wind of this work.

Frank’s music was most successful when she halted the mimetic tone painting and went for more expansive, often dancelike, musical development.

In the vocal works, the singers’ performances were excellent. Young artist programs like Merola help perpetuate a repertory of slight works that happen to fit within certain confines of orchestration, difficulty, appeal, and voicing. This is not to say that works such as Samuel Barber’s short theater piece A Hand of Bridge and Mozart’s singspiel Bastien und Bastienne lack artistic merit, but, in collaboration with an outside organization such as the S.F. Chamber Orchestra, I did not want to hear these singers in such expected fare.

Both works were acted through simple staging and a wealth of sight gags. In the Barber, mezzo-soprano Erin Johnson, especially, showed that she’s a hilarious actress, and bass-baritone Hadleigh Adams bided his time before giving a memorable characterization of a man secretly lusting for wealth, his rich voice contrasting with his briefly exposed purple panties.

Benjamin Simon proved to be a supportive opera conductor. … Throughout the concert, he enforced effective dynamic contrast and sharp articulation.

It was gratifying to hear the Mozart work performed in English, to an unattributed singing translation. This very early work (he was all of 12 years old) lacks the brilliant wind counterpoint and spot-on comedic timing of later Mozart, but the staging by Roy Rallo did much to propel the silly story. Baritone Phillipe Sly’s high-class diction contrasted with the Americanized speech of the other characters. Tenor A.J. Glueckert’s voice easily cut through the texture with pretty and appealing tone, while soprano Marina Harris easily handled Mozart’s phrasing, although I found her tone a bit fuzzy around the edges.

Benjamin Simon proved to be a supportive opera conductor. With the singers performing downstage and out of eye contact, Simon was able to connect with the soloists through a sense of breath and musicality. Throughout the concert, he enforced effective dynamic contrast and sharp articulation. Although a deceptively difficult Haydn overture (to Armida), which opened the program, exposed some of the orchestra’s weaknesses in a program otherwise given over to accompaniment, the playing was always clean and musical.