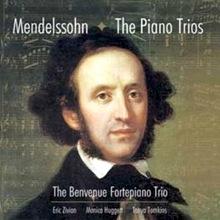 Zingy Mendelssohn From the Benvenue Trio

As an accomplished violinist and pianist, the young Felix Mendelssohn took to piano-and-strings chamber music almost immediately. It’s not an accident that his first three published works are all quartets for piano and string trio.

The two piano trios, though, are later and much more polished music. The “notey” virtuosity of the piano part is still there, though tempered by long lines in the violin and cello; this is music that sings at least as much as it scampers.

The Benvenue Fortepiano Trio — fortepianist Eric Zivian, violinist Monica Huggett, and cellist Tanya Tomkins — offers a new recording of the two trios. The first thing to be said about it is that the sound itself is wonderful. Zivian’s 1841 Viennese fortepiano is both resonant and articulate; the string players’ contributions are caught in great detail, yet with a sense of space around the sound. This is exactly what a piano-and-strings balance ought to sound like.

The performances leave me in two minds. Zivian is fantastic; under his hands the fortepiano hums and thunders and sings, and if in the first minute or so you find yourself thinking wistfully of a modern grand, you will forget all about that by the end of the disc. Zivian’s variety of touch, in company with the fine recording, puts the lie to the idea of the fortepiano as a primitive instrument. There’s as much subtlety here as in any modern-instrument performance I know.

About the string playing I’m less sure. I appreciate the flexible vibrato, the many expressive portamentos, and so forth. But what I miss is a sense that Huggett and Tomkins are ever playing at their highest dynamic, as Zivian clearly is at his in places. It is all most musical, most beautiful; it’s just a trifle too conspicuously cautious.

And the string playing is also, to my ears, underinflected at the beginning of the note. Listeners used to “modern” performances are likely to be impatient with the lack of “zing” in the articulation. Part of that is keeping things on the string that all modern players use a sharp spiccato for; part of it is just, I think, an idea that a vibrato “accent” at the start of a note is an anachronism. Having heard Huggett and her ensemble Hausmusik play some fabulous, all-string Mendelssohn chamber music, I don’t doubt that it can work this way. I wonder, though, whether the presence of the sharply decaying fortepiano doesn’t obligate the strings to put a similar edge on the front of their own notes.