The Cypress Quartet is rethinking the traditional concept of concerts, in which the musicians play a piece typically written some 150 years ago, the audience listens and then claps their hands, the performers bow, and everyone goes home. The Cypress is turning that experience into a two-week project that involves the entire community. 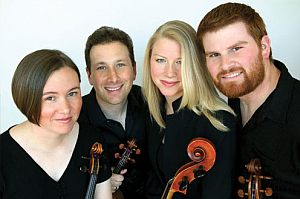 First, the Quartet commissions a piece based on a masterpiece that has been in the repertoire for dozens of decades. Once composed, the new work is taken on tour around the Bay Area. The Quartet members travel to a dozen different high schools, presenting concerts in which both they and young chamber-musicians play. They introduce the new work to students, discuss the old inspiring masterpiece, and relate the traditions of their craft to young minds.

The outreach work doesn’t stop at schools. The Cypress Quartet also plays free concerts at a bar/restaurant and gives free preconcert public workshops, with the composer, during which the piece is analyzed and discussed with audience members. The project culminates in an official concert at Herbst Theatre (next one: April 3), repeated at Montalvo Arts Center (April 5); lobby exhibits will display artifacts such as letters, manuscripts, and sketches by the likes of Beethoven and Mendelssohn.

This kind of campaign is made possible only with lots of passion and belief in the art. Cypress violinist Tom Stone calls it a “crusade to inspire and excite people about this music.” The crusade is now in its 10th year, and Stone reports that students and experienced listeners alike are enthusiastically welcoming the old “calls” and the new “responses.” This year, the response is made by 37-year-old Kevin Puts, who isolates a few notes from the Lento Assai movement of Beethoven’s String Quartet No. 16, Op. 135, and turns it into an entire composition. It’s the same tightly controlled motivic approach that Beethoven himself, as well as Haydn and Brahms, was fond of, though it produces quite different results. “The music is challenging, but [this program] provides a point of entry,” says Stone.

Traveling from school to school, from community centers to trendy lounges to — oh, yeah — fancy concert halls, the Cypress Quartet shares the long, difficult, yet rewarding journey of performing in-depth music. Audiences get to participate, to learn about the composers’ secret connections and riddles embedded in the works, to hear the back-story from professional musicians, to analyze the musical motives, and ultimately to better understand the piece. Finally, at concert time, the entire experience can be more meaningful. But this won’t happen by itself: For the project to reach its full potential, listeners must take advantage of the opportunity the Cypress is providing.

See the Cypress Web site for other free performances that include everything from "Chamber Music and Bubbles" to a discussion with composer Kevin Puts.