The San Francisco Symphony’s Thanksgiving week program is a singularly joyous and virtuosic array. Under the baton of guest conductor Leonard Slatkin, the three performances open with Haydn’s folksy yet concertolike Symphony No. 67 in F Major, followed by Samuel Barber’s Piano Concerto, featuring Garrick Ohlsson.
But then comes the big highlight, marking the 150th anniversary of Sir Edward Elgar's birth: his popular Variations on an Original Theme, Op. 36 — more affectionately known as the Enigma Variations. Each variation bore the initials or, in some cases, a code name, of an Elgar intimate, friend, or acquaintance. They included his best friend, identified as Nimrod; an amateur cellist; Elgar's gardener — and even a bulldog. Their identities remained secret until after Elgar's death in 1934.
A Curious Life
Elgar’s life was unusual, from several points of view. Born on June 2, 1857, in the village of Broadheath, a bit southwest of Birmingham, he was considered something of a country bumpkin by the establishment.

He had no formal academic degrees and no major social connections — both generally considered essential to success in Victorian England. However, he was not without educational advantages. His father owned a music shop, and was organist at the Catholic church in nearby Worcester. So he had music all around him, as well as a musical father for basic instruction. He also had access to solid violin lessons from a local teacher. But from there on, Elgar was self-taught, picking up experience from a range of difficult and sometimes unlikely jobs. 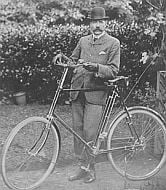 Elgar and his bicycle

Elgar rose to the top on sheer talent and perseverance. Yet he was the first English composer to set a new direction for British composition, firmly breaking with the overpowering domination of Handel and Mendelssohn during the 19th century. In a sense, he became England’s Prince Charming, kissing his homeland awake after a long musical sleep.
Making the Best of Worcester
Learning his fundamentals early on paid dividends. Elgar first served as arranger for the Worcester Glee Club, then became its conductor at age 22. Simultaneously, he was handed the strangest job any major composer ever held: band director of the Worcester County Lunatic Asylum, in Powick. He spent seven hard years there arranging various musical events, coping all the while with what surely must have been bizarre goings-on. Imagine the rehearsals! Word quickly spread of Elgar's musical abilities, and he was made conductor of the Worcestershire Philharmonic in 1898, a post he held through 1904. What this afforded Elgar was an opportunity, in his relative isolation, to experiment with a broad array of compositions. In effect, he had to wing it.

Paradoxically, it was during the early days that his creations began achieving success. Most of his earliest compositions were salon pieces for home use, sheet music that could sell and bring in a few quid. Some of these, things, such as the little Salut d'amour and the two violin-piano pieces, Chason de matin and Chanson de nuit, became national hits during the 1880s. They must have been transcribed for every imaginable combination of duos. (If you don’t recognize the titles, you surely would the tunes.) They also achieved general popularity abroad, not least in the United States. But why French titles from a patriotic English composer? I’ve always suspected they were Elgar’s effort to make them, and himself, seem more "respectable," more socially sophisticated.

It's odd, for although Elgar was never a very distinctive conductor, his sincerity and gentlemanly approach to the job gained him numerous conducting positions, until his quasi-retirement after 1920. Even then, he was a sought-after guest conductor. (He toured the United States as a guest conductor four times: 1905 through 1907, and again in 1911.)
A Composer Makes His Way
Elgar’s first orchestral success arrived with his Froissart Overture, Op. 19 (1880), and one of my favorites, the rarely heard Serenade for Strings, Op. 20. After the premiere of his cantata The Black Knight was performed at the Worcester Festival in 1893, it made its way into a performance in London’s Crystal Place. At last, Elgar had achieved capital recognition.

An even larger bit of luck arrived when Austrian conductor Hans Richter — the Karajan of his day — took an interest and began programming Elgar’s compositions, including the London premiere of the Enigma Variations in 1899 with the London Symphony Orchestra. Richter also premiered the First Symphony in 1908, in Manchester, and then programmed Elgar all around Europe. Elgar could not have had a more influential champion. (Richter’s distinctions were multitudinous, from playing trumpet during the premiere of Wagner’s Siegfried Idyll to conducting the first complete Ring cycle in Bayreuth, to making the first full recording of a symphony, Beethoven’s Fifth of course.) 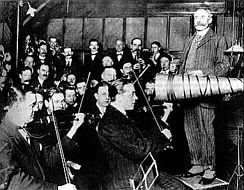 Elgar and orchestra, making a recording

After Richter took up Elgar's cause, other major musicians clamored to premiere his newest work. His superb Violin Concerto, Op. 61, featured Fritz Kreisler as fiddler (1910), and the mournful Cello Concerto in E Minor, Op. 85 (1919), boasted Felix Salmond at its premiere. Each is among the composer’s major masterpieces, worthy companions to the finest concertos of the Romantic period.
Unfinished Business
The pity is that Elgar didn’t finish the two other concertos he started. He tried his hand at an organ concerto in 1879, and struggled with writing a piano concerto between 1913 and 1932. Neither was finished at his death in 1934, although there have been performances by piano and strings of what would have been the slow movement of the piano concerto.

Basically an orchestra composer, Elgar’s vocal output is of questionable strength. His oratorio, The Dream of Gerontius (1900) is admired more widely than it is programmed. The other two oratorios — The Apostles (1903) and The Kingdom (1906) — sound forced. None of the other 41 choral-orchestral compositions holds water in the currents of today.

But there are some other vocal masterpieces out there, for me, beginning with the five shadowy Sea Pictures, Op. 37 (1899), for solo alto voice and orchestra. I doubt many realize that Elgar wrote an opera (The Spanish Lady, Op. 89), and some oddball thing called an "Imperial masque," The Crown of India, Op. 66.

Of the three symphonies, the First, Op. 55 (1908), is the grandest. Like Brahms, Elgar waited a long time before attempting symphonies, finally producing them only because he was being nagged to do so. The Second, Op. 63 (1911), has its fans, too, although I personally find it too Victorian, more an act of will rather than of inspiration.

Where the big question sits is the unfinished Third Symphony, Op. 88 (1932-34), commissioned by the BBC after heavy lobbying from George Bernard Shaw.

Elgar asked, from his deathbed, that the unfinished Third be destroyed, but happily that request was ignored. A performing edition exists and has been recorded. What there is, is fascinating. It’s harsher than the first two symphonies, as well as startling in its harmonic vocabulary — for instance, dissonance. This was a major step forward after a dozen fallow years.

Elgar had been greatly affected by the carnage of the Great War, including the deaths of a number of his composition students at Birmingham. Then came the 1920 death of his wife and helpmate, (Caroline) Alice, identified in the first of the 14 Enigma Variations as "C.A.E." These losses were heavy blows, and Elgar produced only trivial work during the 1920s, attempting to keep an income coming in. His finances suffered, and his international reputation was producing more respect than performances.
Going Out of Style
Elgar found himself out of fashion as younger composers gained ground with fresh concepts. The likes of Stravinsky and Prokofiev, Debussy and Ravel, Puccini and Respighi, Vaughan Williams and Holst, were stealing all the programming space. Then, too, that Elgar’s early career was so associated with the jingoism of Empire did nothing to help. England, like Elgar himself, had become disillusioned with flag waving.

In later years, Elgar was forced into frugality, particularly once the Depression hit. That's not unusual among elderly composers. It happened to Sibelius, whose famous government stipend was small and never increased. (By the way, 2007 is the 50th anniversary of Sibelius' death.) Schoenberg was another such case, trying to live his final years on a few commissions and his $39 a month retirement check from UCLA. But at least he kept producing, whereas the muses of Elgar and Sibelius mostly died of heartbreak.

Today, Elgar seems to be entering a revival. His finest creations, aside from the obvious ones, are increasingly performed. His Cello Concerto is pretty much in the standard repertory, as are the Enigma Variations and the First Symphony. It’s time violinists and conductors woke up to the Violin Concerto, as well.

Elgar’s genius can hardly be overstated, considering his modest beginning. He was relatively isolated as he developed individuality of style, harmony, and orchestration, with no major teachers or university degrees to lean on, nothing other than his own intuition and that storied English doggedness. He achieved high international recognition during his lifetime, and won honorary doctorates from Cambridge, Oxford, and Yale.

There has not been a British composer since who has failed to show some trace of Elgar in his work, be it Vaughan Williams, Holst, Britten, Walton, or Tippett. England's Prince Charming ended up fathering his country’s return to the front ranks of 20th-century composition.