Balancing the comfortable and familiar with the new and challenging — that’s the toughest task of any ambitious arts administrator. When Jennifer Bilfield took over as artistic and executive director of Stanford Lively Arts a year ago, she needed to maintain the existing audience for one of the West Coast’s premier arts programs, now almost 40 years old, while providing the kind of intellectually stimulating programming the Stanford University community craved.
So far, she seems to be finding that balance. Bilfield reports that audiences for the series’ programs are diverse and growing, including a recent sellout of a program of Philip Glass and Leonard Cohen's Book of Longing. And now she’s bringing perhaps an ideal concert: the premiere of a major new work, co-commissioned by Lively Arts from the Bay Area’s most esteemed living composer and performed by an edgy ensemble acclaimed for its eagerness to cross artistic boundaries. On Nov. 30, the New York-based new music group Alarm Will Sound will debut Adams’ Son of Chamber Symphony at the university’s Dinkelspiel Auditorium.

After Bilfield, now 42, accepted the Lively Arts job, Adams was the first artist she called. “John has been such a powerful force in music and advocating for young composers,” she says. “Being a Bay Area resident and someone I’ve known for a long time, it seemed natural to work with him in some way." Bilfield had worked with both Adams and Alarm Will Sound in her previous job as president of his publisher, Boosey & Hawkes, and she thought they’d make a natural pairing. Alarm Will Sound “had the sort of energy and voice that would resonate on a college campus," she says. "They’re rigorous performers, studious and respectful of the art form but also playful and nonideological and curious. They have a nimbleness and can go in so many different directions — it’s a new way of thinking about chamber music.”
An Old Hand at New Music
Being able to call a composer as prestigious as Adams — and getting the call returned — demonstrated just how much new-music cred Bilfield, a trained composer, brought to her new job. She’s the past president of the American Music Center, a New York-based national service and information organization dedicated to new American music. Before heading Boosey, the nation’s leading music publisher, she had worked with various orchestras, venues, and festivals, earning a slew of professional awards for programming and management. Her arrival coincides with plans for a new concert hall at Stanford, opening up new opportunities for Lively Arts to create closer links within the campus and beyond.

"I'm looking forward to building greater, deeper engagement between Lively Arts and the university,” Bilfield says. “I see enormous potential to build visibility and audiences for the enriched programming that emerges from collaboration and joint planning."

But good connections and high ambitions alone don’t pay the bills, and commissioning a new work by one of the world’s leading composers — even with help from co-commissioners San Francisco Ballet (which has enlisted Mark Morris to choreograph the piece next year) and Carnegie Hall — requires a financial commitment. For that, Bilfield looked closer to home.

Her sister and brother-in-law, Eddi and Van Van Auken, both cancer survivors, wanted to honor San Francisco’s Bonnie J. Addario Lung Cancer Foundation, the largest philanthropy dedicated to curing lung cancer. Although their tastes ran more to rock than classical, they’d attended an Adams premiere in the Bay Area with Bilfield some years earlier and loved his music. Why not, Bilfield suggested, commission a new Adams work in honor of the foundation whose work they so admired?

“This is a way for them to reach new audiences and supporters,” Bilfield says. “They’re loving seeing how their values resonate with this. For me, it's also a great sign that if you can listen to the needs of different constituents, you can find common ground.”

Creating that kind of personal connection between arts supporters and new art exemplifies Bilfield’s thinking about how to link diverse audiences to vanguard music and other performing arts. “People connect to people,” she explains. “When people are making a decision and they’re prompted by a composer or friend who is excited about a new piece, that is so much more important than just about anything else we can do” to win new audiences.

Dismissing the old stereotype of the aloof, superior artiste, Bilfield seeks creators and performers who can help her explain why they created a new piece, why it’s important, and why they’re excited about it. It’s no coincidence that both Alarm Will Sound and Adams (who will participate in a postconcert discussion Nov. 30) are excellent communicators in this respect, as well.
A New Leanness
The composer and ensemble have collaborated before, when Alarm Will Sound performed Adams’ original 1993 Chamber Symphony and his Gnarly Buttons. “It was fun working with Adams,” recalls Alarm Will Sound’s Alan Pierson. “He gives you a sense of what the meaning of the piece is and what that means for how you play it.” 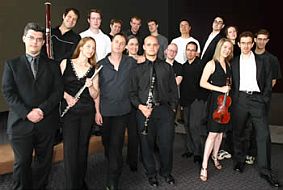 Pierson describes Son of Chamber Symphony’s first movement as funky and groovy. The long, meandering tune in the slower second movement grows out of Adams’ recent melodic writing, particularly his Naive and Sentimental Music, Pierson says. The symphony closes with a “fast, sweet, and fun” movement based on simple patterns going back to Adams’ earlier works. The new work is leaner than its predecessor, which was a turning point in Adams’ career as he sought to escape the simpler pulse and tonality of his pre-1990 minimalist works. “Now that Adams’ tonal vocabulary is so much richer, there’s nothing for him to break out of anymore,” Pierson says. “He lives in that world very naturally now.”

But harmonic richness isn’t really the point of this concert. “It’s really about the games that composers play with rhythms: pulse stretching or compressing, simple rhythms turning into something more complicated,” Pierson says. “The first movement of the Adams piece really does that.” So do works on the Nov. 30 program stretching back half a millennium, in the music of Johannes Ciconia and later Josquin des Prez, up to modern European composers Harrison Birtwistle (who drew his piece’s rhythms from bird calls) and György Ligeti. Alarm Will Sound will play an arrangement of the latter's landmark work for 100 ticking metronomes.

The concert also features tricky miniatures by a somewhat surprising Adams influence: 20th-century American maverick composer Conlon Nancarrow, who employed multiple voices in different, sometimes conflicting rhythms. Shifty rhythms are also increasingly pulsing through popular music, particularly in the subgenre rather pretentiously known as intelligent dance music (IDM). Alarm Will Sound made an album of arrangements of the Irish electronic music pioneer Aphex Twin, and the Lively Arts program contains some of his and other IDM.

This kind of category crossing has won Alarm Will Sound an ASCAP programming award, as well as diverse audiences much younger than those of typical classical or postclassical ensembles. And it exemplifies Bilfield’s commitment to creative programming that pulls in audiences while pushing at the boundaries.