Anyone who enjoys their pears and Stilton or their ham-and-pineapple pizza appreciates the blending of complementary flavors. Why, then, not sample a few electronics along with your opera, or take in modern music played on traditional Chinese instruments? The second Switchboard Music Festival on March 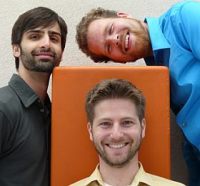 29 promises to serve up exactly such an eclectic feast.

Building on the success of last year’s inaugural festival, founders Ryan Brown, Jeff Anderle, and Jonathan Russell have programmed a “come-and-go-as-you-like,” eight-hour marathon of what they term “genre-bending,” innovative music. The performers are musicians who play and compose outside the box, creating sounds and rhythms from world music, heavy metal, jazz, or klezmer on classical instruments. Some are classically trained virtuosos now making music on electric guitars, found objects, accordions, and even laptops.

According to cofounder Russell, a composer and bass clarinetist, little institutional support presently exists for this type of music. “This music typically happens in clubs and not in concert halls where the more academic form of ‘new music’ is given a place,” says Russell. “We founded Switchboard in order to give a framework, a venue, and a recognition to highly creative music that isn’t currently formalized.” Anderle echoes that: “We also want to bring like-minded audiences together. They might enjoy other interesting groups that they would not be exposed to otherwise.”

Part of Switchboard’s mission is to highlight Bay Area talent, with a healthy mix of established musicians on the scene such as Paul Dresher, Pamela Z, and Adorno Ensemble, as well as emerging artists like the heavy-metal bass-clarinet quartet Edmund Welles and guitarist/composer Ryan Brown. Also on the bill are Zoyres, with an exciting new twist on Eastern European folk; dada percussionist Moe! Staiano; a “French circus meets Willie Nelson and Mingus” mishmash from Japonize Elephants; new sounds on Chinese instruments from Melody of China; Ted Brinkley and Neptune’s Rogue Apothecary, the experimental jazz big-band; Classical Revolution; and music composed by Ken Thompson, Damon Waitkus, Max Stoffregen, and Jonathan Russell himself.

Think “Bang on a Can” in New York — an organization that has clearly contributed to a more hip and casual presentations of serious art music — and you have some idea of where Switchboard is going. In addition to the annual Switchboard Festival marathon, founders would like to eventually present additional concerts, form an in-house ensemble, and even launch a record label. For now, this quirky show promises music that’s anything but vanilla. This music will move you, surprise you, and satisfy a wide range of musical tastes.