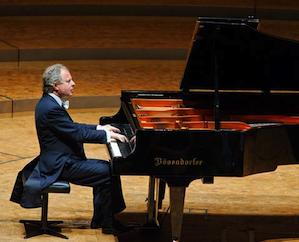 Hungarian-born pianist András Schiff is zipping in and out of town for two concerts, copresented by the San Francisco Symphony and San Francisco Performances. Last weekend he played Bach’s six Partitas at Davies Symphony Hall, and on Sunday evening he will return there with two monumental works of the keyboard literature: J.S. Bach’s Goldberg Variations and Beethoven’s Diabelli Variations.

Schiff, who was born in 1953 in Budapest, is one of the more prominent proponents of the keyboard works of Bach, whom he considers to be at the core of his music-making. At the piano, Schiff displays exceptional clarity in the way he presents voices and phrases, and, as with all great artists, he makes everything look and sound both effortless and completely logical.

Schiff has just started a five-week U.S. tour, which opened with last weekend’s concert in San Francisco and includes three performances at Los Angeles’ Disney Hall, plus concerts in Seattle, Chicago, Ann Arbor, and Boston, as well as two recitals at Carnegie Hall in New York.

He will also play recitals in Mexico City and Toronto before returning to London, where six concerts set for Wigmore Hall (Nov. 23–Dec. 21), to celebrate his 60th birthday (on the latter date), are already sold out.

Given Schiff’s busy performance and travel schedule, the only way for SFCV to catch up with this remarkable artist was via email. Fortunately, plenty of his recordings are available, so the maestro could also speak to me through his music. While preparing the interview I found his 1982 recording of the Goldberg Variations on YouTube, oddly enough in a video in which each variation is accompanied by a painting by Vincent van Gogh.

I cannot think of any particular link between Vincent van Gogh and Johann Sebastian Bach, can you?

As much as I love the paintings of Vincent van Gogh, I also can’t see any parallels between his art and Bach’s music.

Above all, I am interested in what motivates you: the passion behind your work, but also the work behind your passion. You obviously love what you do, but nobody can always only do what they love.

I indeed deeply love what I do, and at my age [almost 60] it is much easier to say “no” to things. Musically speaking, I can do whatever I choose to accept: the repertoire, the orchestras, the venues, the chamber music partners. The one thing in my professional life that I don’t enjoy is the actual traveling. Air travel used to be pleasant and fun, but it no longer is. But this is a small price to pay for so much pleasure.

Any passions outside of music?

My other passions are all artistic. I love to read: good literature, classical and modern, in several languages. Going to museums and galleries, the theater and the movies. I just saw Woody Allen’s Blue Jasmine and absolutely loved it; it’s a masterpiece. I understand that many people in San Francisco are upset by it, but they are wrong.

With great composers like Bach or Beethoven, it is always possible to learn more about their music. We can never say, “We have mastered all the aspects and details of this composition.”

Will you have time to enjoy San Francisco as a city?

When I am in San Francisco I enjoy walking; it is great fun and it is even good for us. I don’t know how to drive.

Artists of your stature often say that they discover something new every day, even with composers or pieces that they have performed many times before.

With great composers like Bach or Beethoven, it is always possible to learn more about their music. We can never say, “We have mastered all the aspects and details of this composition.” Never — it is always a work in progress. Working on the Partitas now, I feel that I understand the music much better than 20 years ago; it is more coherent. Twenty years ago I was somehow lost in the details; now, I see a bigger picture.

What is your routine on the day of a performance, before and after the concert?

On a concert day I like to go to the concert hall in the late morning and play the entire program. There should be nobody else there; it is very private. Then a good lunch (the only meal before the concert) and a good siesta (maximum one hour).

It is good to get to the concert hall at least one hour before the performance and just concentrate on the music. After concerts I am very hungry, so we go out with friends for a bite and a few good drinks. Good food and wine are almost as important as good music.

If I could explain to you what is great about Bach or Beethoven, I would need to be a great poet, but I am only a poor musician. How do you explain to someone why the sun is shining?

Last weekend you played Bach’s six Partitas, BWV 825–830. What is your relationship to these pieces?

The Partitas are very important. Bach thought highly of them, hence his own publication of the set as Opus 1. They are mature works, on a large scale; the fourth and the sixth are monumental compositions. Together they contain all the elements of the Baroque suite, all the different European dances. Each Partita starts with a monumental opening movement that has a different title: Praeludium, Toccata, Fantasia, Sinfonia. Then the dance movements follow. Each Partita has a distinct character. I’ve chosen my own personal sequence because of the tonalities: Starting with the fifth Partita, we have G major, A minor, B-flat major, C minor, D major, E minor; a hexachord. Also, one piece in a major key [is] followed by one in minor. Of course, this is highly personal and I don’t expect others to follow me or to agree with me — it really doesn’t matter.

What are the challenges in these Partitas; musical or technical?

All the challenges are musical; there is nothing “technical” about Bach’s music.

At your next concert you will play Bach’s Goldberg Variations and Beethoven’s Diabelli Variations.

On its title page, the Goldberg Variations are described as “Clavier-Übung, containing an aria with different variations for harpsichord with two manuals.” There is no doubt that Bach wrote it as a monumental whole, but not in his wildest dreams could he have seen complete performances of it. For about 150 years, the variations were condemned to virtual oblivion. Musicians knew of them, but nobody played them, least of all in public.

Today we are experiencing the opposite; the work is immensely popular and frequently played. Bach wrote this composition for harpsichord with two manuals [keyboards], and there are people who maintain that to play it on a modern piano is an abominable sin! Let them believe so; it is just as useless trying to convince them as to make carnivores out of vegetarians. Pianists can play this work without changing a single note. They only have to solve the problem of traffic jams — the frequent collision of hands caused by the absence of the second keyboard.

How do the Diabelli Variations compare?

Bach wrote only a few compositions in the form of theme and variations. The Goldberg Variations is his major achievement in this field. Beethoven was always a master of the genre, not least as a result of his studies under Joseph Haydn, but with the Diabelli Variations he reached unimaginable heights. His model was Bach, his challenge the Goldberg Variations.

Can you explain what is it about Bach’s and Beethoven’s music that makes such perfect sense?

If I could explain to you what is great about Bach or Beethoven, I would need to be a great poet, but I am only a poor musician. How do you explain to someone why the sun is shining and why we like that? Music is a special art; it starts where words fail.

When you play music from memory, where does the music “reside”?

My memory is a gift that I was born with and I am very grateful for it. However, it doesn’t come automatically. It takes an enormous amount of work to memorize these works and to keep them in my mind. My memory is aural and mental, never visual. There is also muscular memory; that’s why good fingerings are important.

Where lies your own personal reward of being an artist? Is it the connection with your audience? Could you be happy just making recordings?

Making recordings can be very rewarding, but for me live concerts are much more important. They are the real thing: unrepeatable experiences. The presence of the audience is vital, but it has to be a good audience that can listen and concentrate. Together we can achieve great things.

For me live concerts … are the real thing: unrepeatable experiences. The presence of the audience is vital, but it has to be a good audience that can listen and concentrate.

Do you ever listen to your own recordings? Or to anyone else’s?

I seldom listen to my own recordings, but very often do to old historical ones. Arthur Schnabel, Edwin Fischer, and Alfred Cortot are my favorite pianists from the past. Of the living pianists I especially admire Radu Lupu and Peter Serkin.

I have read several references to your “decision to forgo pedaling completely” when playing Bach. How did you come to that?

Bach never wrote pedal in his scores. How could he? On the instruments of his time there was no sustaining pedal. On the modern piano there is one. To use it — or not — is one’s personal decision. I prefer not to use it because I don’t need it; others do. To be criticized for not using the pedal in Bach is — forgive me! — ridiculous. In later music, such as Beethoven, Schumann, and Chopin, the use of the pedal is a must, but even here I find that most pianists overdo it.

Under the influence of historically informed performance practice, the overall approach to Baroque music — and to early music in general — has changed a lot over the past decades. How has it influenced you?

The historically informed performances have helped us to a better understanding of this music, no doubt about it. Ornamentation, articulation, pitch — nothing is taken for granted anymore. And some of the old instruments sound wonderful. I love playing the clavichord and the fortepiano.

What are the chances that Bach would disapprove of all that is going on?

What would Bach say? He couldn’t believe that we are playing his music today. Bach was not writing for posterity.