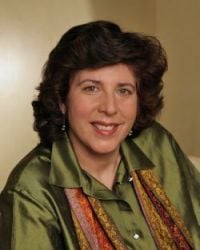 is becoming a household name in opera and theater circles, as well as among those who follow Broadway and Disney musicals. Recently appointed artistic advisor to the Washington National Opera, she also directs at San Francisco Opera, Glimmerglass Festival, and other major institutions in the U.S. and Europe. Critics called her production of Wagner here this June “a Ring to savor and remember,” and she’s back at it again with a brand-new opera based on the tragedy of 9/11, Heart of a Soldier. Zambello met with SFCV at the San Francisco Opera before the day’s long rehearsals got under way.

The premiere of Heart of a Soldier is just three weeks away. What’s happening on the rehearsal stage right now?

We’re only in the rehearsal room right now with our wonderful cast — Tom Hampson, Melody Moore, and Bill Burden — just putting it together. We’re doing a lot of discussing about the piece, staging, and understanding the characters. The composer [Christopher Theofanidis] and librettist [Donna Di Novelli] are present and still making changes as we go along. So it’s a very collaborative process right now. The chorus is also involved, and we have a group of 10 really buff soldiers, who sit around doing 200 dead-hang pull-ups for fun.

What can you tell us about the evolution of the piece, from your first vision of it to where it is today?

The focus has always been on two stories: one story of the two men, Dan Hill and Rick Rescorla, who are really blood brothers, and the subsequent love story between Rick and Susan Rescorla. That has pretty much stayed constant the whole way through. What’s changed is some of the location scenes and what to omit, what to hone down. It’s more about editing down to what is the best way to tell the story, and how to make the characters have a through-line. [Rescorla lost his life saving 2,700 people in the World Trade Center bombings.]

How much compromise is involved between you and the other creators of a new work, or does the director get to call the final shots?

How is the Muslim idea treated in the story?

It’s treated respectfully, but it’s there. He [Rescorla’s friend, Dan Hill] becomes a Muslim, he fights in Afghanistan for the Mujahideen. I mean, that’s a big thing.

Do you think this will be controversial?

I think Afghanistan is controversial now. We went there in the ’70s and ’80s — we were pouring so much money into that country, under the Republican administration, to give them arms against the Soviets. It’s a complex, thorny issue and look where it got us now. In this work we’re talking about reality in history, and theatricality, and how they meld together. It’s a piece that I hope incites discussion about a lot of things. How many times is there a Muslim character, converted from a Christian, on stage? And you ask yourself “Why did he convert?” You have to ask yourself “Was it wrong, what happened on 9/11?” It is wrong when people die, but it did make America change and sit up and look at the rest of the world. I don’t believe I can exercise my own political views around this work, but I can be responsible for presenting a variety of opinions.

The instrumentation includes synthesizers and electric guitar and a large chorus, along with the traditional orchestra. Will we hear more of a musical theater sound in this score?

No, I don’t think so. He’s [composer Theofanidis] much more inspired by late 19th-century to early 20th-century composition and orchestration, and contemporary music finds a voice through the synthesizer and guitar. There’s also a flavor of the East around Islam: an Imam who chants, the real thing.

After such an intense and well-received production of The Ring here this summer, was it strange to start something like this so soon afterward?

We were very prepared in advance. The thing about The Ring, having seen a few of them, is that too many Rings have too many ideas. People can disagree with what we did, but we had integrity to an idea. We said, “This is what we’re doing, how we’re approaching it,” and we didn’t veer from it — the cast, designers, and associate directors were united with a single purpose. So much of the development of Heart was done beforehand, and it’s so great to have the real cast and to be putting it on its feet.

Are the two experiences totally different?

Yes. I mean, Wagner is dead. You discuss a great deal in rehearsal about the interpretation of Wagner, whereas in this we’re talking about reality in history, and theatricality, and how they meld together.

What is your next project?

A new production of Showboat at the Lyric Opera of Chicago this winter, which I’m looking forward to and that’s, again, a kind of crossover between opera and musical theater. I’m going to Germany and Switzerland to do a musical based on [the novel] Rebecca, by Daphne du Maurier. I feel very blessed to have these kinds of projects — some that I’ve instigated, some that I’ve been hired to do but have come up with the ideas for — but I am just in the “lucky” category. When I sit here and talk about it, I realize it even more.