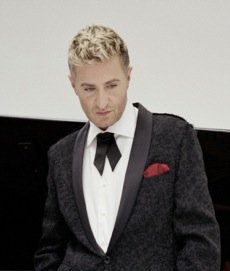 Jean-Yves Thibaudet is one of the world’s foremost concert pianists. His solo recitals and appearances with today’s leading orchestras, in addition to his 40 records as a Decca artist, never disappoint. Along with sensitive and dazzling interpretations of his native French music, and other extensive repertoire (including jazz), his stage pizzazz sets him apart: The man is a PR dream, dressed in couture outfits by Vivian Westwood, with model good-looks, plus a youthful spirit and enthusiasm that is contagious. Thibaudet presents an all-Liszt program with Cal Performances on Jan. 26, for the composer’s 200th centennial year. Classical Voice interviewed him from his sick bed in Paris, where he was getting over a cold.

You have quite a demanding schedule, between solo recitals, orchestral tours, and recording. How do you balance these activities?

I need to do a bit of all of them. I certainly wouldn’t want to do only recording — if I didn’t have an audience to play for, it would be a little bit boring. I can see that the demand shifts between seasons and, in general, there is more for orchestral work than for solo recitals. I think it might be difficult for presenters to schedule solo recitals. I don’t know what it is: People tend to feel like they’re getting more for their money with orchestras and are not so eager for recitals. And yet I think it’s the absolute best way to get to know an artist. You have two hours of that artist and not just 20 minutes. As an artist, you give more of the intimate personality of yourself because you’re alone, so you have to. Having said that, this year, I am doing many recitals, especially with Liszt.

Did you put together this program for his 200th centennial?

Yes. He’s always been one of my favorite composers, dear to my heart and important to my career. I remember playing some small pieces when I was 8 or 10. Liszt is a big part of my repertoire, so I had trouble finding pieces that I hadn’t played before this year. Much to the dismay of my managers, it took me a while to determine this program. It had to be new pieces for me, had to have a certain shape and show Liszt in a different light, not just virtuoso. I’m happy with it now.

What about him as a composer do you like?

He was one of the most phenomenal players and composers for the piano. Just that he could play what he wrote tells us that. He’s not recognized enough for his compositions. His image is that of fast, superficial, and virtuosic, and there is some of that, but beyond it there is a phenomenal person and composer, truly ahead of his time. He invented marketing and PR — he was travelling from city to city championing his music and that of Berlioz, Beethoven, and Wagner. In those days people didn’t have recordings so he would come and play an entire symphony on the piano and that’s how people would hear it. He began his life with the decadence of being a star — he was the Michael Jackson of the day — and at the end, he became a priest. I’m very interested in this late period because some of his music is extremely modern. People don’t know how amazing it is!

What other Liszt programs are you doing this year?

A recital with the mezzo-soprano Angelika Kirchschlager of Liszt lieder. It’s some of his best music, incredibly moving and quite special. Also, I’ll be doing a number of concerti by him, as I usually do.

Do you have other collaborators you like to work with?

I like to play for singers. Renée Fleming and I are trying to work something out, but it’s difficult to schedule. Angelika and I are touring the Liszt recital in Boston and at Carnegie Hall. There is a marvelous young French cellist, Gautier Capuçon, and I’ll perform with him in Paris, Brussels, and Frankfurt — he’s phenomenal. I always loved playing with [violinist] Josh Bell, and hope to do that soon. He’s one of my oldest musical friends. There is always something magical that happens when we play together; we just meet right there, and it sparkles.

You’ve recently toured China with the London Symphony Orchestra. Was that your first trip to China?

No, I’ve been there many times, and it’s fascinating to see that country develop. This time was special because we performed in the World Expo in Shanghai. I always want to keep ties to Asia because I think it’s the future of classical music. All the things we have done in Europe and the States, it’s just starting there. It’s so new and fresh for them. There is so much potential, and they are hungry for it. In the West, kids see classical music as something for their parents, but the Chinese don’t have the same preconceptions. A classical musician can be just as much of a star as a pop artist. And they love the music in the same way and try to imitate that artist. I feel, when I go there, that I really make a difference.

What other projects are coming up for you this year?

This summer at Tanglewood I’m performing the complete works of Ravel for solo piano one evening, followed by a weekend with the BSO [Boston Symphony Orchestra] and James Levine, where we’ll do both Ravel Concertos. People will hear the entire spectrum of Ravel for the piano — it’s rare to find that, and I’m very much looking forward to it. In April I’m premiering a concerto with the Minnesota Orchestra written for me by James MacMillan, his Third Piano Concerto. We’re giving birth to the piece!

What is your sense about video and film? Are you interested in working in that genre? [His playing has been heard on the soundtracks to Atonement and Pride and Prejudice.]

I’ve played on a lot of soundtracks and I hope to do more. It’s another phenomenal way to reach wider audiences. In the movie industry, you reach millions immediately. It’s great to play your music and get it out to those people that don’t hear so much classical music.

With all of the prizes you’ve been awarded — to mention a few, the Chevalier dans l’Ordre des Arts et des Lettres [2002], Victoire d’Honneur [2007], and being inducted into the Hollywood Bowl Hall of Fame [2010] — have you done it all before your impending 50th birthday?

[Laughs] I don’t think too much about it. Just some of those prizes make me feel old, but I think age is relative. I started very young and maybe that explains some of the lifetime achievement prizes. I feel as old as I was 20 years ago. A dear friend in the States says, “Age is a number, and mine has been unlisted for a number of years.”

Much has been said of your cool wardrobe and things like your red-sock phase. What’s your current fashion statement?

I work with Vivian Westwood with all my heart. Although I own pieces by other fashion designers, she is the one that’s my closest collaborator. I’m very lucky because she’s an incredible artist. Last October I caught her big show in Paris for her Gold couture label. I was so proud to know her, to be her friend, to see her amazing work — what talent, really. She comes up with wonderful things for me and it’s great.