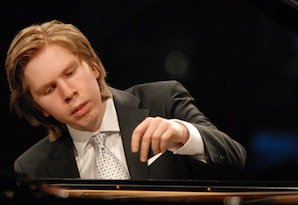 Juho Pohjonen may have first moved into the international spotlight with his Carnegie Hall debut in 2004, but it was clear from his early childhood that he was meant to be a musician. He began playing violin at 2½, took up piano at age 4 (he considers that a little late), and entered the Junior Academy at the Sibelius Academy in 1989 at age 8. His talent is a given, of course, but he combines it with great technique and a reputation for intriguing interpretations of both mainstream and contemporary classics. He returns to [email protected] at the end of the month, where local music lovers will have a chance to hear him in two different programs.

This is your second trip to Menlo Park, right?

My third, actually. The first time I was rehearsing, then I was there last year.

What do you enjoy about [email protected]?

I really like it. It is extremely well-organized; I’ve never seen anything like it. They pay attention to details. When you’re traveling, they make sure there is the music you like in the car. The practice facilities are great. The whole atmosphere is warm and inclusive.

One of the things you’re known for is your programs, which include interesting choices and combinations. What is it like when doing a festival with a theme where you’re more limited in what you can program?

It’s not a problem at [email protected] The Schubert piano recital [Fantasy in C Major, part of the “Concert Program” on July 21 and 22] is one of my favorites and something I really wanted to do.

I could make my own program for the “Carte Blanche” solo recital [on July 29]. The theme of this year’s program is about the world of music — they put it really well in their program — and I could put together a program of sonata fantasies. This is quite an unusual musical form; it’s usually one or the other. The fantasies usually represent freedom while the sonatas represent order. Combining these two creates something very unusual and interesting.

As a musician, you travel to a lot of different cities. Do you have time to explore, and what are some of the places you’ve liked?

For me, it’s exciting to explore the concert halls. Traveling is exhausting. I’m in Bonn right now, just got here, so I’m hoping to see some things.

I’ve heard there’s good hiking near Menlo Park, so I hope I can do that this time.

You started with violin, and then went to piano. Do you still play violin?

Not really. Sometimes I do, but the sound is so shocking and bad. It’s very useful to have the experience with the violin. I can listen to the other players and know what the possibilities are.

The whole atmosphere in Menlo Park is warm and inclusive.

Any instruments you wish you could play?

Maybe cello. Well, every instrument. I wish I could sing.

I’m happy with the piano. It has so many possibilities. You can imitate a whole orchestra. You can create polyphonic sounds. The maximum for the violin is three notes, and it’s very hard to do.

What I don’t like about the piano is the sound always starts to vanish. You can’t make a crescendo with one note, or vibrato. You have to play around this.

I enjoy playing with orchestras but never had any ambitions to be a conductor. I don’t want to be a boss. I want to do it myself.

I think Finland is a country most people in the U.S. don’t know a lot about. What are some of the things you feel people don’t realize about the country?

We have a language quite unlike any other. For instance, we don’t have a form of the verb “to have.” You have to express it as “with me.” It’s a very cold country, with extreme differences in sunlight. Northern Finland has constant sunlight in summer.

I’m happy with the piano. It has so many possibilities. You can imitate a whole orchestra.

Culturally, Finland is both quite young and very old. Our poetry and singing is very old. Classical music is new, but we have some good composers. We’re a little bit like Canada.

I have to ask about the tango. I saw something on the U.S. TV program 60 Minutes a number of years ago about the tango being a huge Finnish pastime. Is that still true?

Yes. There’s a tango singing competition, and they crown the Tango Queen and Tango King. I’ve never gotten into it, but it is still popular.

What are some of the things you do for fun?

Playing is the most fun. It’s a hobby and work combined.

What might you do if you were not a musician?

I have a strange talent for computer programming. I have a computer game, Reflections, that’s available. It’s strange. I didn’t look for a publisher; they just contacted me.

I have other ideas, but it takes so much work to create the computer program.

But for as long as I remember, I thought I will be a musician.

What are you listening to, musically?

I don’t listen a lot to music. The last time was Bartók and Mozart. I usually listen professionally, to hear what other musicians are doing with phrasing and dynamics. Otherwise, I listen to contemporary orchestral music where I don’t have to pay attention to those details.