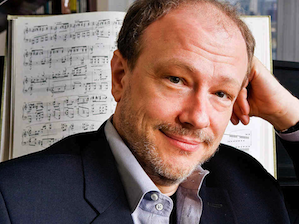 Being artist in residence simultaneously at concert venues in four cities worldwide is keeping pianist and composer Marc-André Hamelin quite busy this concert season. Together with the Pacifica Quartet, he will be performing at San Francisco Performances on Nov. 11, and he will return to the Bay Area twice: for a solo recital in January and for a concert with two chamber players (Anthony Marwood, violin, and Martin Fröst, clarinet) in April. Hamelin’s other three residencies take place in Boston (Celebrity Series), at Wigmore Hall in London, and at the deSingel International Arts Campus in Antwerp, Belgium.

The Canadian-born Hamelin (Montreal, 1961) has made Boston his home for over 30 years. He is uniformly praised for his “almost surreal technique” and has been described as a virtuoso “piano wizard” with “fastidious fingers,” who is “never flamboyant or showy; his playing is all about the music.”

For Hamelin and the Pacifica Quartet, the concert in San Francisco is the start of a tour that leads via Costa Mesa (Orange County), New Orleans, Columbus, and New York, to Philadelphia on Nov. 20. SFCV talked to Hamelin via phone in London, on the eve of a recital at Wigmore Hall.

How did you come to have four simultaneous residencies?

It all came together. I was asked, and the residencies were scheduled on convenient dates and at wonderful places. They are all very vibrant arts centers and musical venues. I feel very fortunate, and I am actually quite proud of these residencies.

Your upcoming concert with the Pacifica Quartet includes a piece by [American composer] Leo Ornstein [1893–2002], his Piano Quintet Op. 92, from 1927, which you will record for Hyperion this winter.

It is really an undiscovered gem. There are two recordings, one of which has not made it to CD — and I don’t know if it ever will. It is a fabulous piece; sort of lengthy, 38 to 39 minutes, in three movements. It is very passionate, at times a little barbaric, but with a very romantic nature. Ornstein was born a Russian Jew, but emigrated to the States when he was still a boy. Some of the themes are quite Hebraic in nature, but not all of them. It is really quite a mix of styles.

How did you find this piece?

I knew about Ornstein’s piano music, but I discovered the piano quintet when I found an LP of the first recording, on the CRI label. I immediately thought This is quite fabulous, and it has always been my wish to promote the work; I would love it to become part of the repertoire, and I have long wanted to record it.

On Wikipedia, this Piano Quintet is described as “An epic tonal work marked by an adventurous use of dissonance and complex rhythmic arrangements, recognized as a masterpiece of the genre.” Is this quintet typical for Ornstein’s style?

Ornstein wrote in a variety of styles. In the very beginning, his music was quite romantic, very plain. But around 1912 to ’13, he suddenly and inexplicably started to write very aggressively dissonant piano music. He didn’t understand exactly why, or where it came from, but he just let it happen. These pieces created quite a stir at first, but also made him very famous. At the same time, he kept his more romantic, more tonal side. He could switch freely from one to the other throughout his career as a composer. He wrote music for most of his very long life; he died at age 108!

It was really amazing. Pacifica Quartet’s unity of thought and ensemble work were really staggering.

How did you first meet the Pacifica Quartet?

I visited one of their recitals, in Cambridge, when they played Beethoven’s Quartet No. 15, Op. 132; Elliot Carter’s third quartet; and George Crumb’s quartet Black Angels — all in one evening. It was really amazing. Their unity of thought and ensemble work were really staggering. The fact that they were so unbelievably comfortable with both Beethoven and Carter really said something; I thought they would be perfect for this Ornstein quintet. I talked to them after their concert and broached the subject, and now it is happening.

But you have never played with them before?

No, I haven’t. In just a few days we will meet for the first time, musically, and our first concert in San Francisco will also be our very first concert together. We will have the two days before the concert to rehearse. That is what we could arrange at this point. For traveling musicians, rehearsals can be quite a trick to organize.

And you are confident that you will like each other enough, musically speaking?

I really have no doubt. They are very nice people. I can’t say enough good things about them.

When you return in January, we can hear one of your own compositions, a piece called Barcarolle.

I am actually touring with it quite a bit this season. The piece was commissioned by the Ruhr Piano Festival for its 25th anniversary. This is the biggest piano festival in Germany. I premiered Barcarolle in June and played it six or seven times since.

Barcarolle is a piece that I don’t really like to talk about. I am hoping that it expresses enough to make words unnecessary.

Can you tell me something about Barcarolle?

It is a piece that I don’t really like to talk about. I am hoping that it expresses enough to make words unnecessary. Even for me it is enigmatic, I have to say. I just wrote, and let things happen the way they wanted to. In some cases I am not sure what they did, and that includes the ending, which is very puzzling. I would like the piece to tell me what it means, but … [laughs]. It will forever remain a mystery.

Do you compose on paper or at the keyboard?

For most of my life I have composed strictly on paper, away from the instrument. I was afraid that by writing down what I improvise, I would bring too much of a physical or pianistic element into the writing. But lately I find that improvising can really give me substantial ideas — ideas that are quite usable and viable.

You have a reputation of being a virtuoso pianist, but you seem to resent that label.

Mostly because the word virtuoso is usually used to denote some kind of keyboard acrobat, which is far from what I want to do. The only reason I go on stage, really, is to share music — to share the miracle of these wonderful pieces that we have the privilege to play. And the miracle of human creativity… my God, what greater mystery is there?

Do you need the presence of an audience? Could you share via recordings only?

I enjoy recording just as much, but in a different way. Of course, you don’t have the galvanizing presence of an audience. What drives me when I am recording is what I might be able to achieve with the finished product — how I can promote more unfamiliar works, or shed new light on what people already know.

The only reason I go on stage, really, is to share music — to share the miracle of these wonderful pieces that we have the privilege to play. And the miracle of human creativity.

Is there a piece that you have never performed, but would like to?

Would you believe it if I said Pierre Boulez’ Second Piano Sonata? I worked on it when I first discovered it, as a teenager. I wouldn’t have the time to spend on it anymore, to really play it to my satisfaction. It is extraordinarily difficult and also only fit for a specific kind of audience.

What is so fascinating about this sonata?

It is totally serialist, but in my view also full of passion. The drive behind it is gigantic and awesome. I have always admired it; I still do. This sonata is on par with pieces like Schubert’s B-flat Sonata and Ravel’s Gaspard de la Nuit— which is a composition that I place just about at the top of the 20th-century piano repertoire. Gaspard is a complete phenomenon, from start to finish. It is astonishing.

Is there a time when there is no music on your mind?

No, which is why I would probably be incapable of meditating. I don’t think that I could turn off the music.

What goes on in your mind? The latest thing you are working on?

It could be anything: what I am working on, or something I haven’t heard for many years. Sometimes it is a stupid jingle that I just heard on television. Or it is a creative kernel of a new composition that occurs to me.

How do you get rid of those jingles in your head?

I concentrate on something else, but I usually just let it happen. They tend to come back.

How do you choose your encores, and how many do you play?

I always have a few pieces prepared. It depends on the public’s reaction. I will play as many as they want, basically. I played a concert in Helsinki at the beginning of this tour, a few weeks ago, and they asked for five. So I played five.

What is your favorite encore piece?

I love to play the first movement of Mozart’s so-called “Easy Sonata” in C Major [No. 16, K. 545]; I do that a lot these days. I also play Chopin’s “Minute Waltz,” in which I play the recapitulation in seconds in the right hand. That usually gets a good laugh. I am not trying to show off; it is just wit.