From May 14 through May 19, the New Century Chamber Orchestra will perform its final program of the season, titled "Shadows and Light." The conductorless string orchestra, led by one of the world’s most preeminent violinists, Nadja Salerno-Sonnenberg, will be performing in Berkeley, Palo Alto, Marin, and San Francisco. I caught up with her to chat about the program and the orchestra as well as find out more about what makes her tick.

One of the pieces the orchestra will be performing is the premiere of Dreamscapes by composer Clarice Assad. How would you describe this piece?

I’m just in the process of learning this. It’s the second piece she has composed for us this year; the first was Impressions, which we performed in our first series. I gave her some guidelines in asking her to compose a piece for this final program, which explores the music of the night. There are so many ways that night is represented musically, and I wanted to showcase the evening with this program. She was intrigued.

This is a piece that takes you into REM. It’s very visual and what you hear is very explanatory. When we dream, we often dream of more than one thing. The solo violin represents the person and the dream he or she wants. The orchestra represents the outer forces that come in and interrupt the dream. It’s part romantic and part scary. She’s such a talent.

You started as music director of the NCCO in 2008. How have you found this experience?

It’s spectacular. I do have to concentrate on the business aspect of the music, but working with the group is the most gratifying experience. I learn so much from them, and the group provides an outlet to share with each other. Our partnership is working so beautifully. Because it’s been a year, we know each other as friends. It’s a spectacular group of people, and they outplay themselves. We discuss everything, of course, and we know how to deal with each other and not waste time.

As music director, you choose the music for the programs. It sounds like this has been a year with programs with themes. Will this continue?

I did do themes for the first season, but that will change. There will still be thematic programs, but I’m a big fan of great arrangements. The repertoire is limited for a string orchestra, so I am looking for ways to expand. I don’t want the group to be stifled into one repertoire or even one genre of music.

Any surprises in this new-to-you role?

I had no idea what the administration part would entail, especially with this economic crisis. I’m a very energetic person, but I do spend several hours every day working on the orchestra, no matter what else I’m doing. I haven’t been this busy since I won the Naumberg prize in 1981 and I did far too many 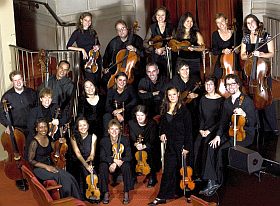 concerts afterwards. But I just take things one day at a time.

What do you want to achieve with this group?

I hope I have the continuing energy for this group. I love them, and want them to have the recognition they deserve and a position of respect and admiration in the classical music community. That’s where I want to bring them.

You also have your own record label. How did this come about?

I started it out of frustration. I signed my first contract at the tail end of the golden era of classical music, and the money spent was outrageous, even for a photo shoot for a classical album cover. I watched the industry change. And as I got older, I became more possessive and protective of what I had done and built, and I had no control. I couldn’t always record what I wanted to record.

I also saw colleagues starting their own labels, which I hadn’t thought was possible back in the beginning of my career. The straw that broke the camel’s back, though, was having my tracks used on tacky compilation CDs without my knowledge. I understood that my contract allowed that, but I wasn’t happy.

I released two albums almost immediately, and they did really well. I just released my seventh album, and the first with the NCCO will be released in July.

How old were you when you first picked up the violin?

You then moved to the United States at the age of 8 to attend the Curtis Institute of Music. That must have been exciting, but was it also daunting? Or were you too young to really realize what was happening?

It was a move that affected my whole family. My teacher told my mother that I had talent, and that the teaching wasn’t available where we lived in Italy. She decided to move everyone. Yes, I lived with the guilt for years, but it seems to have turned out well.

I was so young that it was an adventure. I wouldn’t have done it at age 16. But I was attending college at age 8, and didn’t speak English. The Institute is in an old brownstone, and I was so small I couldn’t open the huge door and had to wait for someone to let me in. I also went from one lap to the next. And I was young enough to get into trouble ... rollerblading on the Oriental rugs, that type of thing.

What would be your ideal day in San Francisco?

I love the trip across the Golden Gate Bridge and viewing the city from the lookout just inside Marin county. I also like Fisherman’s Wharf. I love the neighborhoods, such as walking form Chinatown to North Beach, and along the waterfront. If I had all day, I’d just start walking, stopping to eat here and there. It’s a good eating town.

Away from the music, what do you do? I notice on your Web site that there are a lot of photos of you fishing.

I love to fish, and I’m good at it. I don’t know where it comes from. But if there’s a fish in the water, whether it’s a little fish or a shark, I’ll catch it. I love to cook. I think that goes back to being with my grandmother. My grandparents moved with us, and they raised me while my mother was working. I would help my grandmother cook and we would talk. Plus, I’m Italian; dinner is an event. I have a house in the country that sustains me, even when I’m not there for months. I look at photos on my computer. It balances me out. And, I love seeing friends, though it’s hard to schedule because I’m so busy.

If you weren’t a musician, what do you think you’d do?

When I was a child, I wanted to be a butcher. I don’t know why; maybe memories of going to the butcher shop with my grandfather. Then, I wanted to be a gas station attendant (I liked the smell). Later on, I thought either a jewel thief or an astronaut. Now I’d say “no” to the butcher, the gas station attendant, and the jewel thief; the jewel thief would be exciting, though. Probably an astronaut, though I don’t think I’d qualify. Maybe something to do with NASA.