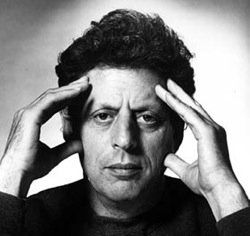 Philip Glass needs no introduction as one of today’s most influential composers. He’s a chief architect of the minimalist style, though today he reserves that term for his earlier compositions. As comfortable collaborating with conductor Dennis Russell Davies as with rock icon David Bowie, he composes works that blur the boundaries between classical music and contemporary culture. Critics tend to either love or hate his music, inciting a polarization that has fueled his success and made him a household name. SFCV spoke with him by phone in New York, before his arrival at the Cabrillo Festival for the performance of his Cello Concerto, Aug. 15.

You collaborate with some of the most interesting artists, across artistic disciplines and styles. Could you tell us about a few partnerships that stand out for you?

I came to New York when I was young, in my 20s. I wanted to be where interesting people would be, where I could meet them and where I could work. It turned out to be a good move to make. Some of the people I became involved with were Allen Ginsberg and Bob Wilson; film directors like Godfrey Reggio, [Martin] Scorsese, and Woody Allen; dance people like Jerome Robbins and Twyla Tharp; and lots of musicians. I’ve always been inspired by other artists. Working with them brings something new into my own music. My motivation was about expanding my own language and expanding the base of my music.

Your opera Kepler was just premiered. Since many of your operas chronicle the ideas of scientists, tell us: Do you have a special interest in science?

It was my hobby when I was a kid. I belonged to an astronomy club when I was a little boy — I used to read about relativity. In college I was enamored of mathematics. At a certain point it was clear to me that I had gifts for music that I didn’t have in mathematics and science. Because of my real, true enthusiasm for the imagination of the scientist, I honored it in the only way I could: by writing about it in music. Last year, the opera house in Linz, Austria, did over 20 performances of Kepler — an amazing number. The public really embraced it.

Are Europeans more open to art music in general?

A bit more than we are. It’s a different culture. I work on both sides of the Atlantic, and in South America and Australia and elsewhere. We have a way of doing things in the United States, and I like the way. I prefer to live here and to work here. I can be envious of the kind of public and the acceptance of high art or serious art that you find in parts of the world that we don’t have at home. At the same time, we have something else here. There is an energy and a spontaneity in American art which you can’t find anywhere else.

You are still so active as a performer. Do you feel just as comfortable in the limelight, and what does that role fulfill for you?

I’ve been playing concerts for more than 60 years. And it was through practicing and the experience of being in front of people playing that I really began to understand the role of interpreter in music, even though it was music that I had written. I was no longer hearing and playing it as a composer but as an interpreter. There is a tradition of the composer as performer, like Rachmaninov, Chopin, and Liszt. Musicians who became identified with the performance of music, as well as the composition, developed a special, warm relationship with the public.

You have a very busy touring schedule. How do you find time to write?

I get up in the morning early and I work all day. When I’m touring, I work on the road. I find it a very good place to work. I tend to be a bit iffy about practicing then, but most people would admit to that.

How do you manage to stick with your vegan diet while touring?

Well, I don’t, really. I can do that at home, but it’s almost impossible in some countries, like Spain or Mexico, to find some kind of food that doesn’t have meat in it. In those places, the “vegan” part of the vegetarian diet goes out the window because without dairy you have nothing to eat. When I’m home I tend to be very aware of my diet. For me it’s a good diet.

What type of music do your younger boys listen to?

They both play music. Cameron, the 8-year-old, is playing piano and writing his own music. Marlowe, age 6, plays violin. They’re playing music every day in the house — the classics, Bach and Mozart: the same stuff I did when I was a kid. It seems to be a very durable way of learning music.

You and [girlfriend] cellist Wendy Sutter also tour together, and will be here together at the Cabrillo Festival.

We tour together when we can, and we have a couple of programs that we do. We play in several trios, and there is a string sextet that she put together that plays music of mine. She plays a couple of concertos of mine, including the one at Cabrillo. So there’s work for us to do and there’s music for me to write.

Are there wedding bells for you two in the future?

[Laughs] I wouldn’t be surprised. It’s a bit unpredictable since there are a lot of factors involved, but we have a good time together personally and musically.

When you look at the scope of your career, you’ve gone from being the bad boy to being a senior composer of great influence. How does that feel?

I don’t look at it that way. I would have to be on the outside looking in, and I’m on the inside looking out. To me, I am more aware of the continuity of the work I do. I’m still fielding new ideas, thinking of new ways of working. I guess something did change, but it happened so slowly that I didn’t notice it.

What about those that stereotype you? How much are you influenced by negative criticism?

It’s been mostly helpful. When I was just starting out at 30, it would have been more difficult, but some of the older composers were very angry at the type of music I was writing. They talked about it in the papers, and people got upset about it and I became famous long before anyone had heard any of my music. I had no intention of being controversial. I was just writing what I wanted to write. But it sparked some kind of antagonism, and, before I knew it, I was playing at the Metropolitan Opera House. There was recently a piece performed in London, and in the same newspaper on the same day one reviewer said it was a profound and moving experience and the other reviewer said it was an unmitigated piece of trash. You can’t do better than that.