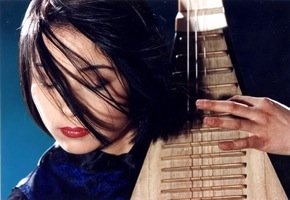 We in the West owe our awareness of the Chinese pipa — a lutelike, stringed instrument — to one woman, Wu Man (check out her Web site). Ever since arriving in the U.S. 20 years ago, the indefatigable, conservatory-trained master of the Pudong School of classical pipa playing has made it her mission to explore new and diverse avenues for pipa recognition. From her long association with Yo-Yo Ma’s Silk Road Project and frequent collaboration with the Kronos Quartet, to premieres of pipa pieces written for her by Lou Harrison, Philip Glass, Terry Riley, Tan Dun, Bright Sheng, Chen Yi, and others, Wu Man has served as a one-woman ambassador, emissary, and musical evangelist for her instrument.

In conversation, Wu Man’s enthusiasm is balanced by a natural grace and unpretentious demeanor. Her idiosyncratic English, some of which I’ve retained, only adds to her charm.

I’ve been immersing myself in your recordings and interviews. Given all the projects you’re involved in, do you ever have time to sleep?

[Laughing] Well, I do, occasionally.

Have you always had this kind of drive for your instrument and for music?

Since I was in college, I think I am pretty crazy already. Always wanted to push ahead for myself and see what I can do and what is interesting. That’s me, I guess.

In China, are the majority of pipa players male?


It’s changing. All the teachers of my generation were men. I have four pipa teachers, and they all men. I think the change now is for female to play. This big change started in the ’90s, when there were more opportunities for boys to play sports or computers rather than have to stay with an instrument to play music. So there’s a lot of chance for women.

Also, the pipa is a very demanding instrument. You really need to sit down and practice. It’s hard. When I started, I was 9. My brother tried, but he couldn’t sit there for hours.

When I noticed the photo on the cover of a 2007 Silk Road Ensemble CD of your gig with the Chicago Symphony Orchestra, I couldn’t help but notice that you were the sole woman in the middle of a large sea of handsome men. What does it feel like to be the lone female?

That’s an interesting question. I think we in the ensemble never thought about it, though audiences sometimes ask where the women are.

Depending upon the program, we sometimes have other female musicians touring with us. But I think I am the oldest member of the ensemble, besides Yo-Yo Ma. I began as a member in 1998.

It’s very interesting. The whole team behind us, including the stage crew and stage manager, was all female. So I’m not alone, just on the stage.

Did you have any contacts in the U.S. when you came here in 1990? How did you get known?

First of all, the music circle is smaller than you may think. If you play somewhere where another musician hears you and likes you, they get the word out. It’s a small world. And my goal is to always push myself forward, trying new things.

Chinese traditional music is in my blood, but I want to try other things. I want to see if the pipa can survive in different music communities, or can have a role on today’s music stage. I think all can combine together.

I remember the first time I met the Kronos Quartet, in Pittsburgh, at a new-music festival. I had a piece composed by a Chinese composer, Ehou Long. I had a very minirecital that I did, to introduce the pipa to the musicians and the small audience. The Kronos was there and fascinated by the instrument, and also by the composer, whom they were introduced to. They heard the tape; they saw the video. That’s what I mean when I say it’s a very small world.

Tan Dun was my schoolmate in Beijing Central Conservatory, which is the central music school in China. We’re different ages, but we all knew each other. He wrote a piece for pipa and string quartet in 1994, which was very early.

Terry Riley heard my instrument with the Kronos, got interested, and wrote a piece. Lou Harrison was 80 when he was commissioned by Lincoln Center and Stuttgart Chamber Orchestra to write a piece to be conducted by his good buddy Dennis Russell Davies. So I was at Lincoln Center a couple of times, they know me, and they thought I would fit with Lou Harrison. Lou wasn’t afraid to do anything. In his early years, he spent time in Taiwan, and was familiar with Asian instruments.

It’s fascinating to learn that your work in the U.S. curating the Carnegie Hall program on Chinese music took you back to China, where you discovered music you had never been exposed to in the first place.

I think half the pieces on my new album I did not know when I lived in China. That was a special time. In the ’70s and ’80s, no one wanted to study the real history of the instrument. We basically did not know what ancient pipa music sounded like, or where it came from. Even though I learned all of the traditional pipa repertoire in China, and came to the States where I worked with so many musicians and composers, the question about ancient pipa music always stayed with me. I wanted to relearn the history of the pipa.

The clip on the PBS NewsHour showed that little raucous family band with the high tenor. Is that just one little group in one little village, or are they surviving remnants of a bigger tradition that expanded beyond the village?

When you played with the musicians you met in rural areas of China, did you play with steel strings, or did you switch back to the pipa’s original silk strings?

No silk strings exist today. They survive only as mentions in history books. I think people want to reconstruct the silk string pipa, but so far without success.

When I started to play in the ’70s, we mostly used nylon strings. We switched to steel in the ’80s.

With steel strings, are you able to project over an orchestra, as when you and the Silk Road Ensemble performed with the Chicago Symphony Orchestra?

For the Pipa Concerto, we always used amplification, just as with a guitar. In such a big hall, you can barely hear it otherwise.

It all depends on the hall. My experience in Boston in Jordan Hall, there’s no need for anything. The pipa is so clear, you can hear every single note. Some bigger halls aren’t built for plucking instruments. You need amplification to hear detail and vibrato, especially in the left hand.

You’re going to be at San Francisco’s Yerba Buena Center with Kronos on June 4, doing A Chinese Home. Can you tell me about the program?

That will be a multimedia theater piece that Kronos and I created a year ago with stage director Chen Shi-Zheng, who also did The Peony Pavilion. It’s an hour-long theatre piece. It’s a fascinating piece. It has four different parts. Through the music, it presents Chinese culture and history with a video component, lighting, costumes, and lighting. There are five of us, and we act, as well as play. You should see it!

So here you are, as famous as you are, and you’re raising money for a film on Chinese folk music. How’s it going?

As we mentioned, two years ago Carnegie Hall wanted to have a big Chinese festival as a theme. They asked me to curate two Chinese traditional music concerts. That gave me a chance to go back to China and look for Chinese folk music. (I did visit previously, but I always visited my parents and stayed in the city.)

I did research and relearned. I visited very, very small remote areas. While I was doing that, I heard the music, and said, “I have to bring a camera here. Otherwise, I’m going to regret it.” But it’s so difficult. I’m not a film person; I’m a musician. I know I want very unique Chinese folk music; but from a film side, I have no idea how to edit, do sound, and other technical details, and I can’t ask people to do it for me. So I’ve been provided this site to ask the general public for funds. So far, it’s going very well. I almost have half.

What is the most bizarre situation you’ve been in, playing the pipa?

In a good way, right? In my early years, I joined a jazz group in a downtown New York club. When I played a concert, some musicians came to me, said they had a gig, and asked if I wanted to join them. At that time, I was saying yes to trying everything.

When they invited me to the club, I sat there and asked, “Where’s the music. There’s no music!” And they said it was going to be improvised. I said, “Okay.” Everybody starts playing — of course, I have no idea what they play — and then they said, “Okay, your turn.”

That’s when I realized that we had forgotten that traditional Chinese music was improvised. So the jazz was a good, bizarre experience that gave me a chance to rethink and relearn.