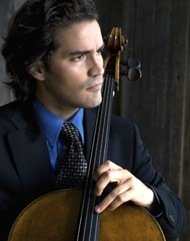 When Zuill Bailey “met” his first cello at age 4, it was love at first sight. At 12, he decided music would be his professional life, and that passion and talent has led him to a career as an acclaimed cellist in demand as a soloist, as well as positions as artistic director of El Paso Pro Musica (Texas), artistic director designate of the Sitka Music Festival (Alaska), and professor of cello at the University of Texas at El Paso. His latest release, Bach Cello Suites, is topping the classical charts. For nonclassical music fans, though, he may best be known (if somewhat anonymously) for his roles in two gritty television dramas.

Your first encounter with a cello was very forceful, for lack of a better word. What do you remember about it?

I don’t really remember; it’s more what’s been told to me. I come from a family of musicians. Luckily for me, the culture and arts were something we did as a family. I was always surrounded by music, so it was inevitable. My father's doctorates are in music, my mother was a pianist, and my sister, who is 2½ years older, plays violin. My parents were warned against having both children playing the same instrument.

So, I hadn’t started playing, but I was taken to concerts to see what instruments I liked. It must have been a student concert, as this wouldn’t have happened at the National Symphony, but I was backstage and running while looking behind me. I smashed into a girl and knocked her cello over and broke it. I told my parents, “That’s what I want to play.”

Have you had other instances when you’ve broken instruments?

Only once, when I was in the fourth grade, I handed my cello to the teacher to tune. She thought I still had it; I thought she had it; and it dropped into the orchestra pit.

It’s a wonder cellos don’t run in fear from you.

I got it out of my system early.

What do you love about the cello?

You sit and are wrapped around it and the sound goes straight into your heart. It has a human voice, and the repertoire is glorious.

Has any other instrument tempted you?

No, I found my soul mate. I knew immediately. My parents had never seen me sit so quietly. I think it was the vibrations, and I was in awe of the beauty.

You’ve said that you decided at age 12 to become a professional musician. What brought that about?

At age 12, I had my debut. I had never played with an orchestra before. I used to play with my eyes shut. I opened my eyes and was looking around and everyone in the hall was breathing together. There was a unity. We were all together, lost in the moment and the music through the work I had done.

Afterwards, a gentleman told me, “If you find something you love to do, and can make a living at it, you’ll never work a day in your life.” I felt that pure joy of communication and made the decision that I couldn’t live without it. It had chosen me.

How did that decision affect you?

I immersed myself in music. I have students ask if they should become professional musicians. I tell them if they have to ask, they probably shouldn’t. The deepest passion always comes through.

You’re based in El Paso, but also are involved in the Sitka Music Festival in Alaska. That has to be different from El Paso.

June is Sitka, January is El Paso; they’re polar opposites. But I meet more people who have been to Sitka than have been to El Paso. It’s not a getaway destination or a hub city.

Still, you’re a big booster of El Paso as your home.

I went there kicking and screaming, but I love it. I tell people it’s like the beach without the water. It’s very high, 4,000-feet elevation. People get off the plane and think they’re feeling dry because of the desert, but it’s because of the elevation.

The sunsets in El Paso in the fall surpass anything else in the world. They’re blood-red with splotches of deep purples and blues. That’s the time to visit.

One of your main passions is outreach programs.

I can’t blindly ignore what made me love music, which is the exposure I had as a child. From a very early age, it was brought to me. I was very accustomed to the accessibility of classical music.

I’ve started a series of educational programs in a comfortable setting. It’s not a lecture, but rather a way to bend into the way people already do things. For example, film series — there are tons of movies about a musician or a time or a composer.

I’ve also looked at programs that are outside the box. What is it about a composer or performer that is interesting and pertains to what we know? Why did he do this? It creates empathy. Then I take it a step further and discuss relationships and other aspects of a person’s life, and how that affects what they’ve done. After a week, everyone has been surrounded by this “life” information that they can relate to their own lives.

I’ve started a series at the local museum, combining the art with the music of the era. The most obvious example would be pairing Impressionist paintings with Debussy.

Through this, I’m the guide to where people can think for themselves, not to how they should think.

You’ve also done work on television, and not just as a musician performing as part of a concert. How did this come about?

In some ways, it was a larger-scale outreach program. I was asked to coach the actor Ned Beatty on how to fake playing the soundtrack for the series Homicide: Life on the Streets. I ended up playing the actual soundtrack.

The producers also produced the HBO series Oz, which was groundbreaking at the time. It was a revolving door of real-life characters in prison. They approached me. I’m not an actor, and don’t want to be, so the original idea was sculpted down to fit me as a performer. I played a murderer, a cellist who has harpooned someone with the endpin. Which is horrifying, but is always the comment backstage — “Watch out for the endpin!”

I played Bach, Paganini, and other pieces for the show, and didn’t dumb down the music. It was a kind of large-scale outreach program. And it worked. For years, I’d hear people say to me, “Hey, you’re that guy,” and ask if I had a CD of the music out.

It’s competitive but less combative on the hands. It’s a musician’s sport. My father learned to play very well as a young man and hung out with ranked players. He represented the Air Force when he was in the service and played for them. I learned from him.

Most people don’t really know how to play. It’s a wonderful sport, and a little scary, but with the best players it’s almost an art form. I take it seriously. I’m the silent, deadly one, although I’ve been taken to the cleaners. It’s always someone who looks very unassuming, then you find out they’re on the Chinese National Team or ranked in Venezuela. You can tell by how they hold the paddle.

What else do you do in your little free time?

With my life, I’m doing everything I love to do. I travel to perform, so I find new places to eat and visit. With everything I do, I have a joy for life. I feel like I’m playing all the time.

Before I go, I have to ask about your first name [which is pronounced “zool”], although I know you probably get asked about it all the time.

It’s a Scot-Irish name. It was my father’s name, and it represents my family, so I’m very proud of it. People do ask if it is a stage name, which surprises me because it’s not a name you would choose as a stage name.

What music are you listening to these days?

I’m planning on recording the complete works of Brahms, so I’m practicing and researching that. Not listening, just thinking and reading. I have his biography in my bag.

When I recorded the Bach CD, I went into the mind-set of where Bach takes you when you listen to and play his works to excess. Brahms is perfect for that, as he was set up to be a perfectionist. I’m looking at two pieces, True Love, which was written for his mother and is very angry, aggressive, over-the-top real, and Love Song, written for Clara [Schumann], which is a fantasy of new love, eyes shut, looking skyward. I’m also looking at the works he revised, the sense of very grounded love, not impetuous.

I’m old enough now that I’ve felt those things, so it’s my turn to express them.