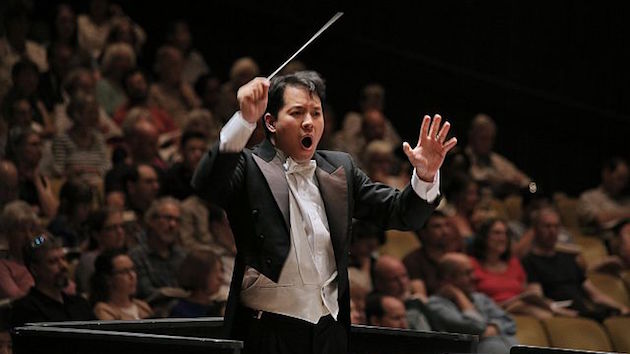 Most community choruses without auditions don’t publicize that fact, which may be considered a potential handicap to excellence.

Berkeley Community Chorus & Orchestra — nothing like most such organizations in many ways — makes a virtue of necessity:

“The philosophy of the BCCO is that there is no person who cannot express himself or herself to the highest musical standards in a chorus.

“Accordingly, auditions are not required for membership in the chorus. The membership is marked by hard work and collegiality which lead to the chorus’ unified resonant timbre and brightness.”

Add to that bold approach the opening of doors to the community at all times with free performances, and steady leadership: Ming Luke took the baton from Arlene Sagan in 2011, becoming only the third music director in BCCO’s 52-year history. (Founder Eugene Jones was the first.)

The next concerts, this weekend, feature a large-scale work, originally requiring more than 500 performers — about twice what BCCO marshals.

In addition to the full orchestra and symphonic chorus, there are four soloists – Yoon Geong Lee (soprano), Katherine Trimble (mezzo-soprano), Derek Jackenheimer (tenor), and André Chiang (bass). Each soloist is a winner of the BCCO Vocal Soloist Competition.

The St. Paul Oratorio is a complex, dramatic, and moving work, modeled musically on the great Passions by J.S. Bach. The influence of Bach can be noted, for example, in the excitement of the fugues and in the uplift of the chorales interspersed throughout the work.

The oratorio is a dramatic presentation of the life of the apostle Paul (Saul of Tarsus) from his complicity in the killing of Stephen, the first Christian martyr, to his conversion, subsequent active life, and his farewell at the start of a journey that will lead to imprisonment and death.

The oratorio has 45 parts. The instrumental overture is based on Bach’s chorale “Wachet auf!” (Sleepers Awake), which later in the work is also sung as a commentary on Paul’s conversion and as an expression of joyful spiritual surprise.

Music Director Luke says that to him, the oratorio “encapsulates the essence and brilliance of Mendelssohn. This single piece pays homage and draws inspiration from Bach and Handel while at the same time showcasing Mendelssohn’s own staggering gifts as a craftsman and composer.

“There are fugues of dizzying complexity that rival those of Mozart and Bach and still retain incredible clarity. The chorus is required to change color and tone between the various roles they play, showcasing the intensity of the work.”

Luke also has a personal connection with the work:

We had just performed the Dvořák Stabat Mater, which Dvořák wrote after he tragically lost all of his three young children in a short period of time. The Stabat Mater thus was a deeply personal work driven by Dvořák’s grief and suffering.

Having performed and conducted Mendelssohn’s Elijah several times but not having explored his first oratorio, I wanted to explore St. Paul more, knowing Mendelssohn’s life circumstances at the time. It was a complete revelation — we’ve been having a wonderful time rehearsing this great masterwork and look forward to the concerts.