The idea that numerical properties underlie music has interested people since at least the Middle Ages. Back then, people believed that orderly ratios underpinned not only music, but even planetary movement — the harmonious yet inaudible “music of the spheres.” In our own time, the Adorno Ensemble’s upcoming concert showcases relationships between music and numbers that interest contemporary composers. 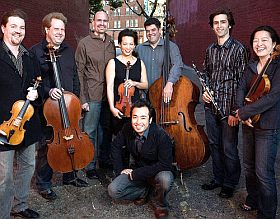 Like the music on this program, the ensemble’s name also calls for explanation. It’s named after the noted German thinker Theodor Wiesengrund Adorno, who studied ways in which music relates to society. Since the group is committed to making contemporary music seem relevant and palatable, “Adorno” seemed, to the group, a fitting name.

Xenakis was born in Romania to Greek parents, but moved to France in the 1940s. He was especially drawn to music and math because he was trained as an engineer, and he also worked for the architect known as Le Corbusier. The Adorno will play his Morsima-Amorsima, a quartet for piano, violin, cello, and double bass that was premiered in 1962. The composition is generated by a highly complex computer algorithm, which Xenakis also used for other compositions.

Nancarrow, meanwhile, was an American-Mexican composer who composed many “studies” for player piano. He believed this mechanical instrument could perform more-complex rhythms and meters than humans could. But he transcribed his Study No. 34 for string trio. Just as he sought to overcome limitations of human performers by composing for the mechanical player piano, perhaps Nancarrow also sought to overcome the timbral and expressive limitations of the mechanical instrument by transcribing this study for a human ensemble.

Finally, Wuorinen (b. 1938) is an American composer who has won both a Pulitzer Prize and a MacArthur (“Genius Award”) Fellowship. His Eleven Short Pieces for violin and vibraphone dates from 2006. Don’t be fooled by the title of his compositional treatise, Simple Composition. The ideas about musical time that inform Wuorinen’s compositions are complex and multifaceted, with influences ranging from Stefan Wolpe to Milton Babbitt to Elliott Carter.

The relationships between music and numbers explored by these contemporary composers have moved a long way from the medieval “music of the spheres.” Instead of mere harmony and order, these composers also entertain complexity and chaos. Also unlike the medieval idea, their contemporary music is actually audible, and worth a listen when presented by the Adorno Ensemble.