Quinteto Latino Championing
Music From South of the Border

Patrons of chamber music presenters around the world are familiar with typical ensembles like the string quartet or the piano trio; not so much the woodwind quintet, which tends to be treated like a poor cousin. Yet those who know its rich repertoire and tonal possibilities realize how much the quintet has to offer. San Francisco’s Quinteto Latino is generating further interest in this type of ensemble by unearthing brilliant music by Mexican and other Latin American classical composers rarely heard in North America. Their concert at Old First Concerts on Sept. 11 features tangos, habaneras, and waltzes that will leave you dancing in your seat. 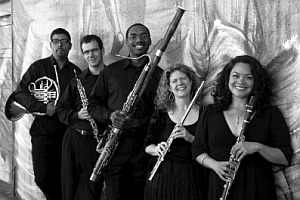 The Quintet — Diane Grubbe, flute; Kyle Bruckmann, oboe; Leslie Tagorda, clarinet; Armando Castellano, French horn; and Shawn Jones, bassoon — was formed by Castellano in 2001. The current personnel (with the exception of new member Jones) have played together since 2004. All are conservatory-trained musicians. Says Castellano: “In the course of my great training in classical music, I never heard or discussed music from Latin America. When I later had work in Mexico and the Dominican Republic, I found a thriving classical music culture all over Latin America. There is a long history of composers, from colonization on, that wrote classical music.”

Castellano formed the Quinteto Latino as a response to the feeling that this important music was being overlooked in North America. In a society where there are few people of color in major symphony orchestras, or elsewhere on the classical scene, Armando hopes the quintet and its emphasis on Latino composers can function as something of a role model for youths of diverse ethnic backgrounds. “It provides a point of connection for kids to hear a classical music that evokes their culture and language,” he says. To this end, the quintet is heavily involved with educational concerts and workshops through both the San Francisco Symphony’s Adventures in Music program and Young Audiences of Northern California.

And through this music, Quinteto Latino is sharing an indigenous ethos. “I’m of Mexican descent; my grandparents were from Mexico. I was brought up here in the U.S., but around things that were typical of Mexican culture, like music, family, foods, folk-dancing, and values,” says Castellano. “The music illustrates this tenderness, interaction, and passion.” Clarinetist Leslie Tagorda agrees that such elements can be heard in the music they play. “Most of what we do is grounded in movement and dance,” she says. “The underlying thread in all this music is the rhythm. The types of rhythms, beats, and syncopations make it different from other Western classical music.”

On Sept. 11, Quinteto Latino showcases three Mexican composers, including Carlos Chávez, arguably Mexico’s most important composer. His Soli No. 2, with its neoclassical elements, is the more contemporary-sounding piece on the program; the rest are melodic, with a jazzy, rhythmic intensity. Arturo Márquez’ Danza de mediodia is on the bill; he is known for incorporating native musical forms and styles into his orchestral pieces. Mario Lavista’s Cinco danzas breves is a dance collection written in 1992 for wind quintet. In addition, they’ll play Aires tropicales by Cuban jazz musician Paquito d’Rivera, and the group plans a folk music set, as well. All the pieces were written since 1970.

If you like what you hear, you can also hear the quintet on Chamber Music Day, Saturday, Sept. 26. Visit the San Francisco Friends of Chamber Music Web site for details, at www.sfcm.org.