Despite the name, there’s nothing old school about Old First Concerts. Set in the Old First Church in the heart of San Francisco, on Sacramento at Van Ness — an intimate, old-world setting with no bad seats and acoustics that hint at the place’s celestial connections — the concert series has become a favorite venue for a wide variety of musical events, from classical chamber music and recitals to jazz, avant-garde, blues, folk, and multicultural performances. The San Francisco Guitar Quartet’s concert on Nov. 20 is a great example of Old First Concert’s philosophy. The group will feature music that combs several genres for inspiration, connecting them with an increasingly broad spectrum of music that isn’t easily labeled. (“Contemporary classical”? Sure, why not.) 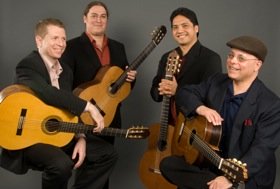 If you’ve got four good guitarists (David Dueñas, Jon Mendle, Patrick O’Connell, and Mark Simmons), you’ll probably end up experimenting with the tone qualities of those instruments. The practice is centuries old, but since guitar quartets are relatively new and don’t have a large repertory written specifically for them, the sounds they produce almost become modern by default.

But the SFGQ promises to do more than coax new sounds out of conventional instruments. Mendle, the group’s new member, plays an 11-string archguitar that’s a combination of 19th-century guitar, modern guitar, and Renaissance and Baroque lutes. It was built right here in San Francisco by Alan Perlman (but don’t try building one at home).

At the experimental edge of the SFGQ program will be Atanas Ourkouzounov’s Objets futiles. Like Béla Bartók, however, Ourkouzounov infuses his music with folk characteristics, so even this abstract, modernist music can appeal to an audience. Fortunately, it’s impossible to compose away the inherent warmth and storytelling ability of the guitar, and even more so to resist the humanity of a culture that gave the world lo real maravilloso. And so there are two traditional South American songs to look forward to: La Partida-Vals Venezolano and La Venenosa-Huayno Peruano, both arranged by Dueñas; and Cuarteto 5/Chorinho by Javier Farías, whose music is often based on Chilean folk rhythms.

The quartet will also play At the Sound of Light, by Mill Valley native John Anthony Lennon. While not as famous as that other John Lennon, he’s a well-known composer who has created a substantial body of guitar music. His music, like that of his teacher, William Bolcom, exploits American idioms, making him a favorite of guitarists like David Starobin and David Tannenbaum.

Yet this concert, like most guitar concerts, is primarily about listening to the instruments played by superior musicians. The guitar has such a wide variety of repertories and uses that it comes close to being a universally human medium. And if a player happens to bring along his archguitar, so much the better.