Dreaming Backward and Forward in The Demo 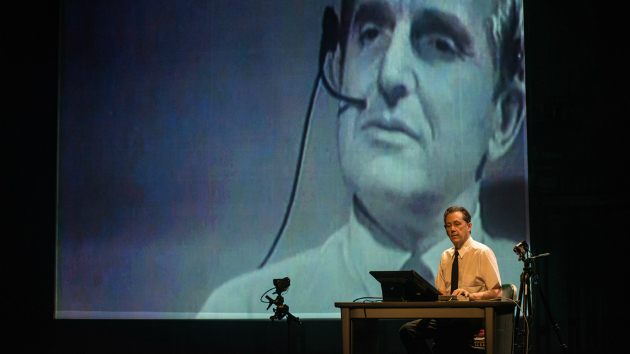 We’re living in the age of information technology, as the very publication you’re reading now attests. SFCV and much of the rest of modern life depend on vast computer networks, graphical user interfaces, hypertext, and the rest. But when, exactly, did this era start?

Like the Bronze Age or any other epoch, it’s hard to pin it down to a particular moment, but it might have happened on December 9, 1968, at San Francisco’s Brooks Hall. Just days before Apollo 8 headed for humanity’s first orbital rendezvous with the moon, a Portland, Oregon-born, UC Berkeley-trained computer scientist and electrical engineer named Douglas Engelbart greeted about 1,000 engineers gathered at a computer conference.

Over the next 90 minutes, using projected video generated by an advanced computer that sat 30 miles away in his research lab at Stanford Research Institute, Engelbart, seated at a custom-designed console, and his assistant Bill English (who would soon become famous himself) unleashed a demonstration of what his team at the Stanford Research Institute had been working on for years. That’s how the world first learned about word processing, on-screen windows, a blocky screen-pointing device at the end of a wire that Engelbart and his colleagues were jokingly calling a “mouse,” hypertext, computer graphics, video conferencing (including a live, two-way remote link to his lab 30 miles away at Stanford), linked files, collaborative real-time editing, and more.

Later dubbed the “Mother of All Demos,” the event sparked a revolution in computer science, leading directly to the innovations made at Xerox’s Palo Alto Research Center and licensed by Steve Jobs (who got pretty good at making tech demos himself) at Apple Computer to make the first, modern personal computers with graphical user interfaces, which were widely adopted by other companies and led directly to your ability to read this story, among other less-important developments. Engelbart, who died in 2013, went on to a storied, and stormy, career that culminated in his receiving the nation’s most prestigious technology prize from President Clinton.

Engelbart’s 1968 demo was no doubt a transformational moment, if not so well known outside technology circles as within them. But how do you turn it into art? That’s the challenge composer/performers Ben Neill and Mikel Rouse faced in creating their new music theater work The Demo, which premieres April 1 and 2 at ground zero of the computer revolution, and Engelbart’s own lab: Stanford University.

When he chanced upon Engelbart’s demo, about three years ago while doing unrelated computer research at Stanford, “I was struck by this video document of a performance-type event that laid out so much of the technology that ended up transforming the world,” Neill remembers. No stranger to technology — he plays an electronically enhanced instrument called the “mutantrumpet” — Neill embarked on some research, and discovered not just a momentous event, but also a fascinating world that birthed it. “[Engelbart’s laboratory] was a unique combination of people, the defense industry, the Bay Area ‘60s counterculture,” Neill says, “this whole technological sensibility that embraced a broader group of people than the typical computer science department at the time.”

For Neill, whose music draws on electronica, minimalism, jazz, and DJ culture, and who’s been certified as a “musical futurist” by Wired magazine, it sounded like a subject ripe for an artistic interpretation. Having worked often with visual and film artists, he knew the project needed a collaborator — and he had the ideal one in mind.

“I thought of Mikel because he’d done the [1996] opera Dennis Cleveland where he took on the role of a talk show host” as the focal point to tell larger stories about talk TV and other popular entertainment, religion, and much more. Rouse and Neill had met in the 1980s and worked together a few times. “Our music had similar elements— rhythmic elements from pop mixing with more complex structural ideas,” Neill explains.

Certainly one of the most acclaimed composers of his generation, the prolific 58-year-old New Yorker has worked with choreographers from Merce Cunningham to Ulysses Dove, written a trilogy of acclaimed operas (Cleveland is the middle one), directed and scored several films and video projects, released 28 albums, and garnered performances all over the world along with dozens of awards, grants, residencies, and other laurels.

And he’s had an abiding fascination with technology; Rouse scored his International Cloud Atlas for Cunningham for multiple iPods set to “shuffle” and distributed to audience members who each got a personalized soundtrack, and he may have unintentionally helped birth the genre of electronic dance music with one of his early 1980s works, Quorum. Electronica fans tell Rouse his music sounds like EDM because of the pop production values Rouse loves, “but if you listen deeper, then you realize it’s much more complex than four-on-the-floor” dance beats, he says. “It becomes an interesting way of thinking about technology.“

Rouse’s interest in music technology and his work in video and multimedia had just landed him a residency with the the National Center for Supercomputing Applications (NCSA) at the University of Illinois when Neill called.

“Part of what they do at NCSA is modern versions of the demo — show off new technologies that might wind up being part of what we as consumers use in the future,” Rouse says. That’s what Engelbart’s team was doing nearly half a century ago. “They were showing what would become workable prototypes of Google Chat and Skype and hypertext. He showed us the future.”

Rouse and Neill realized that if they were fascinated by Engelbart’s vision, audiences would be too. “I think people want to know where all this technology came from,” muses Rouse, citing as evidence the current spate of movies and books about Apple founding visionary Steve Jobs, “and we wanted to let people know about Engelbart’s work and how important it was in setting up what became the whole personal computing revolution.”

“We wanted to let people know about Engelbart’s work and how important it was in setting up what became the whole personal computing revolution.” -- composer Mikel Rouse

Rouse realized they could use Engelbart’s demo “as kind of the ultimate sample, an opportunity to explore and create a new sample technology piece.” But like Neill, Rouse was intrigued as much by the story’s cultural aspects as its tech. “[Engelbart] had a humanist vision of technology,” Rouse explains. “He saw it as a group activity, not a singular, solo activity.”

Fittingly, the project really got going on networked computers during a UI residency in January 2013. “We had some ideas of overall structure and how the whole piece would unfold over the 90-minute time line of Engelbart’s original demo,” Rouse recalls. “We created different elements separately and then during the residency we spent a couple weeks bringing all this material together, combining rhythmic patterns he would bring, melodic ideas I had, and so on. We just built it up that way in a very hands-on way, with somewhat improvisatory means.”

Engelbart’s story influenced The Demo’s musical styles, including Asian percussion sounds inspired by his time on an island in the South Pacific, and the West Coast cool jazz of the 1950s that would have been playing at the time and place Engelbart was developing his revolutionary ideas, reflecting the dreamy, relaxed, cool attitude Neill had spied in Engelbart’s calm persona during his famous demo. “It became a musical way of representing him in the way you’d characterize someone musically in an opera,” Neill explains.

The cool jazz influence contrasts with “a lot of rhythmic percussive material that sort of sounds like EDM but with more complex time signatures and structures than you’d expect in dance music,” Rouse adds. “A lot of these tools that we’re using —essentially remixing this older material live — are quite experimental in nature. We are really doing our own demo, where we’re trying to push the limits and explore new ways to use the tools that are part of the future. With that sonic vocabulary, we’re using contemporary tools in contemporary language to tell the story of how those tools developed.”

The Demo tells that story obliquely. After they’d created the underlying beds of rhythmic and melodic patterns, Rouse went back to New York and contrived a libretto that used text that appears on the screen in the original demo, including computer code. “Young coders looked on code as poetry,” Rouse says. Only in performance do all the words, music, and imagery converge to tell the bigger story.

Using Engelbart’s original 1968 demo as a framework, “we’ll be interacting live with the visual material and sound,” Neill explains. “With the mutantrumpet, I do live sampling, grabbing things I play acoustically and manipulating them on the fly.”

They’re also acting out the roles of Engelbart and English, with digital magic sometimes used to superimpose Neill and Rouse’s live images over the originals. Rouse had the five-key device Engelbart used in the 1968 demo replicated as a MIDI trigger, allowing him to manipulate the onscreen imagery live while also imitating Engelbart’s movements in the original. “I’m singing and moving and it is absolutely the most mind-blowing and exhausting experience,” he admits.

Naturally, Rouse and Neill have to memorize most of their music in order to handle the other demands, but they have lots of help in realizing such a complex story: set and production designer Jim Findlay, set and projection designer Jeff Sugg, stage director Bob McGrath, sound designer Christopher Ericson, music director Matthew Gandolfo, a small vocal ensemble (hired locally) that functions as a chorus singing the typed text that appears on screen. They also welcomed support from Bill and Roberta English, who reached out to members of Engelbart’s original team to put together a reunion, one of several adjunct events Stanford is presenting with the performance (see below).

As often happens in new theater productions, the pair used workshop productions at Illinois’s Krannert Center and in Brooklyn  — demos of The Demo — to help them make the complex, non-narrative music theater piece comprehensible to non-techie audiences.

All that multitasking, while a logical extension of Engelbart’s vision, also reminds us that technology always brings downsides, as those of us struggling to keep up with our various constant and colliding electronic stimuli can attest. The Demo accordingly touches on the consequences of Engelbart’s ideas. As NCSA’s Donna Cox, a producing partner in The Demo, told them when she saw the direction the project was heading, “You’re dreaming Engelbart both backwards and forwards.”

Making a strictly historical documentary opera would violate the spirit of a subject that was so future oriented, so just as the technology they’re using to realize this project looks to the future of music production, Rouse and Neill early on decided to include thematic material that extends Engelbart’s vision into the present — and our own future.

“It’s reflecting on the whole notion of how the technical aspects of our lives can be overwhelming,” Rouse says. “The way the whole technological revolution has developed may be not exactly what Engelbart had in mind. It’s by far mostly positive, but there are some negative aspects to it too. Do you like the fact that the [National Security Administration] is spying on our emails? Do you get human interaction from Facebook, as Engelbart hoped technology would allow? Some of the symposiums around the event will be addressing those questions — what are we giving up as well as gaining?”

Still, there’s no question that The Demo’s premiere in the belly of the beast, where information technology in general and Engelbart’s demo in particular actually spawned, will have special resonance for locals.

“This is a dream come true,” Rouse says. “Getting to do the world premiere of this piece as part of Stanford Live, to be doing it in Silicon Valley, not only because that’s where it all started but also because of the prominence of technology in that location… the zeitgeist seems to be with us.”