Messiaen and remix don't seem like two words that should go together. Genre hang-ups aside, the phrase remixing Messiaen seems tantamount to rewriting Zola or, even more ghastly, reabstracting Mondrian. After all, remixing that which has already been expertly mixed does what, exactly, to the original product? And, then, what of that which we're left with at the end of the process? If the original work is a masterpiece, does remixing remaster the masterpiece? 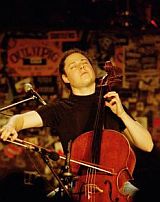 The uneasy, slippery place provocatively suggested by the title of the program is precisely where clarinetist David Krakauer, cellist Matt Haimovitz, and hip-hopper Socalled (aka Josh Dolgin) flourished in "Akoka: A Messiaen Remix," presented Wednesday in Dinkelspiel Auditorium as part of Stanford Lively Arts' Messiaen Centenary series. These musicians, along with pianist Geoff Burleson and violinist Todd Reynolds, modestly performed not a reworking of Olivier Messiaen's most important, elegiac work, Quatuor pour la Fin du temps (1941), but a reframing of it.

To remix, of course, is to juxtapose: to not subtract from the original piece of music in any essential way but rather to impose a reconsideration of it alongside it. "Akoka: A Messiaen Remix" is Messiaen's quartet reconsidered. But who's doing the reconsidering? The metaphorical answer is Henri Akoka, the clarinetist who premiered Messiaen's quartet while both were imprisoned as French soldiers in a Nazi POW camp in Görlitz, Germany.

Fortunately, the simple and ultimately ineffectual channeling of the inhuman brutality of the Nazi war machine as seen through the eyes of Akoka, who was both Jewish and Algerian, was not the idea the ensemble transmitted to the audience at Stanford. The concert was about feeling how Akoka himself might have felt, and about the experience of dealing with a feeling that probably never left him. (Akoka, unlike Messiaen and the other non-Jewish musicians who premiered the quartet, was never released from Nazi imprisonment. He ultimately escaped by jumping from a moving train, with his clarinet in his arms.)

Opening the program was the piece Akoka, a "structured improvisation" by Krakauer. Frenetic glissandos and the kineticism of the prepared piano (played with drumsticks and the loose hairs of a bow) amounted to violent musical gestures, played with great intensity and control by the four instrumentalists.

Magnificent in PraiseMessiaen's Quatuor pour la Fin du temps (Quartet for the end of time) was carried out magnificently by the ensemble; Krakauer's full, yet reserved statement of the quixotic clarinet "melody" of the first movement blended wonderfully with Burleson's round, yet subtle block chords.

Haimovitz transported the audience with passionate and truly sincere playing in the beautiful, reflective fifth movement, "Louange à l'Éternité de Jésus." And last though certainly not least was the contribution by Reynolds, who at times leaned into his violin as to push breath out if it, producing a lush, urgent sound on the final movement, "Louange à l'Immortalité de Jésus." 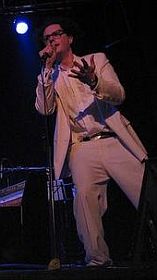 In the last portion of the program, a brief moment after Socalled unassumingly took his spot in front of his sequencer (an instrument that, of course, brought into relief the antiquity of the other four being played), a penetrating low-decibel pulse was amplified through the concert hall. This "heartbeat" was left open to interpretation: Was it Akoka's? Was it that of Socalled? Was it the collective audience's? Really, to search for an answer would be to miss the point of the final piece completely: Dolgin's Meanwhile (A Messiaen Remix) interpolated Messiaen's quartet, vocal samples, Socalled rhyming on a microphone, World War II era newsreel, live playing by the quartet, and other "noises" into an impressive soundscape that was underpinned by a heavy breakbeat. Some would argue, of course, that the choice to create noise is a musician's greatest protest.

What, then, is a noise consisting of fragments of a composer's inspired revelations (Messiaen's quartet) along with the archived sounds of the apocalypse that he witnessed? What if it makes your head nod?

In the end, the Quatuor pour la Fin du temps is a piece in which time — time as orderly progression — doesn't necessarily end but, instead, moves without moving forward, thereby ceasing to be time as we know it. It was a stimulating feat to impose on the "end of time" the endless time of a heartbeat-turned-breakbeat, complete with a snare drum on beats two and four. The last bit of sound that Socalled gave us, of course, was a ringing alarm clock.