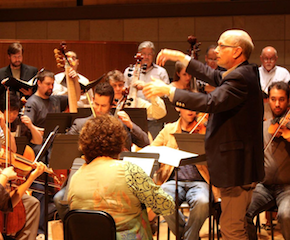 From all over the United States, and from as far away as France, Russia, Hungary, and South Korea, young and aspiring music professionals have come to San Francisco to take part in the professional training program that is the “academy” part of the American Bach Soloists’ Festival and Academy.

Their two-week-long exploration of historically informed performance practice under the guidance of ABS members resulted in an amazing concert Friday by an ensemble of instrumentalists and vocal soloists that consisted almost entirely of Academy participants.

In the words of ABS Artistic and Music Director Jeffrey Thomas, Handel’s L’Allegro “is not opera, it is not an oratorio; and yet it seems to be both, blurring their distinctions while displaying an astonishing array of colors, moods, and sonorities that can overwhelm the listener in their clarity and variety.”

For his delightful composition, Handel (1685–1759) used poems by English poet John Milton (1608–1674) about the allegorical characters L’Allegro (the cheerful, extrovert man) and Il Penseroso (the pensive, melancholy man), discussing the merits of their respective temperaments.

Milton’s text was adapted and rearranged by scholar and grammarian James Harris (1709–1780) into a kind of dialogue between the two antipodes, which covers the first two movements of L’Allegro. Handel asked his friend and librettist of Messiah fame, Charles Jennens (1700–1773), to supply a third part: Il Moderato — the voice of moderation that balances out the two opposing personalities.

Handel used Milton’s rich text to his full advantage and created a piece that is at once extremely moving, amazingly beautiful, very witty, and sumptuously orchestrated.

Handel used Milton’s rich text to his full advantage and created a piece that is at once extremely moving, amazingly beautiful, very witty, and sumptuously orchestrated. Phrases, images, and descriptions in the libretto gave the composer ample opportunity to use word painting: an infectious laugh in “Haste thee, nymph”; a lengthy flute solo depicting the “even-song” of a nightingale (played with graceful intimacy by Joshua Romatowski); and references to a horn, an organ, and bells, reflected by prominent passages or by solos of the corresponding instruments in the ensemble.

There are no specific characters in L’Allegro, and recordings typically cover the parts with a quartet of singers. But by divvying up the arias, Thomas managed to employ no fewer than nine Academy vocalists in a terrific and nicely voice/typecast lineup.

With her gorgeous tone, Hailey Fuqua was a magnificent Penseroso soprano, who reached the high notes in her coloraturas with enviable ease and precision. She was stunningly expressive in her arias “Oft on a plat of rising ground” and “Sweet bird” (with the flute solo), even though her diction and vowel clarity were not always as well-defined as those of her counterparts: Anna Gorbachyova as the bright and enthusiastic Allegro soprano, and the brilliant soprano Fiona Gillespie (Moderato). Hungarian alto Agnes Vojtko was earnest and grounded in the profound Penseroso aria “There held in holy passion still.”

With her gorgeous tone, Hailey Fuqua was a magnificent Penseroso soprano, who reached the high notes in her coloraturas with enviable ease and precision.

The most prominent male vocal part was for Michael Jankosky, who sang an energetic and cheerful Allegro tenor. Remarkable, too, was Allegro bass Benjamin Kazez in the aria “Mirth, admit me of thy crew” (with horn solo by Sadie Glass).

Together with Fiona Gillespie, Shotwell sang the lovely duet “As steals the morn upon the night,” before the truly splendid ABS choir, with its round and transparent tone, tied both the evening and Handel’s message together with a plea for the benefits of temperance in the final chorus: “Thy pleasures, Moderation, give; In them alone we truly live.”