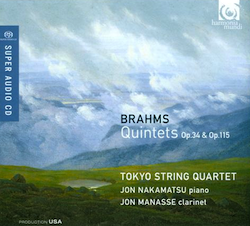 Recording wishes, like performance wishes, are two-sided. There’s what the audience wants to hear, and then there’s what the musicians want to perform or record. Not only do the two not always coincide, but I’d guess that they diverge more often than not. I was browsing online the other day, and found that someone had recorded the complete chamber music of Charles Koechlin involving saxophone. I said, “Hey, I would like to hear that” (and actually did order it); but I think I was one of a very small company.

If you know a body of music well, you want to document it. Honestly, the world wasn’t crying out for a new recording of either Brahms’ Clarinet Quintet or his Piano Quintet, but I wouldn’t have wanted to miss either of these, by the Tokyo Quartet with clarinetist Jon Manasse and pianist Jon Nakamatsu.

The two works are such different animals. The Piano Quintet took its composer an awful lot of reworking and reformulating. It seems to have started as a string quintet with two cellos, then become a work for two pianos, and finally solidified into what we know now. The two-cello version was destroyed by the ever-self-critical composer, though someone has predictably attempted to “reconstruct” it (not all that successfully). The two-piano version is still around, and indeed still played, though not nearly as often as it ought to be. And it gets the opus number 34b, despite its being written first. Op. 34, the numbering says, is the genuine article.

The Clarinet Quintet is from nearly 30 years later, and has quite a different atmosphere. Brahms had all but publicly announced his “positively last appearance” as a composer when he ran across the clarinetist Richard Mühlfeld and was sufficiently smitten with his playing to compose four large-scale works for him, of which this is No. 2.

You’re struck by the beauty of Manasse’s tone, glowing and round and liquid.

The Clarinet Quintet comes first on the disc, and from the beginning you’re struck by the beauty of Manasse’s tone, glowing and round and liquid as he goes from register to register. It insinuates itself into some passages so thoroughly that you barely care who’s playing what — a tribute to the Tokyo’s rich, dark, and sumptuous sound. The highlight is probably the slow movement — the outer parts very slow and intense, dissonance rubbing achingly against dissonance, and the middle “Hungarian” section as well played as I’ve ever heard it (with Manasse everywhere from crooning near-inaudibly to keening at the top of his lungs).

The Piano Quintet is a much grimmer creature. The thing that impressed me the most here was the long-scale control. The first movement’s development section, for example, is an insanely long stretch of steadily increased tension. How do you pace it? The Tokyos and Nakamatsu do it so well that it makes the flesh creep. Ditto the end of the finale, which is basically a mad dash to the finish, with a couple of ankle-spraining detours.

Nakamatsu is very fine here, as everywhere; he, like Manasse, has a talent for getting into the texture.

Meanwhile, the slow movement here is an idyll so blissful as to make you forget what you’d just heard, while the scherzo following it is more than ordinarily menacing and savage. Going straight from that to the eerie opening of the finale is an unnerving transition; it’s as though one moment you were pursued by all the fiends of Hell, and the next moment you were wandering in a landscape you’d never seen before. And, in the end, when things merely get faster and faster, and there’s no way out at all, you find the fiends were still there.

Nakamatsu is very fine here, as everywhere; he, like Manasse, has a talent for getting into the texture and not overlording it like a concerto soloist. As for the Tokyo, no praise is enough. If I single out cellist Clive Greensmith, it’s only because there are so many cello moments here — from the opening bars of the Clarinet Quintet, to the first variation of its finale, to his insouciant-yet-urgent way of playing the main theme of the Piano Quintet’s finale.