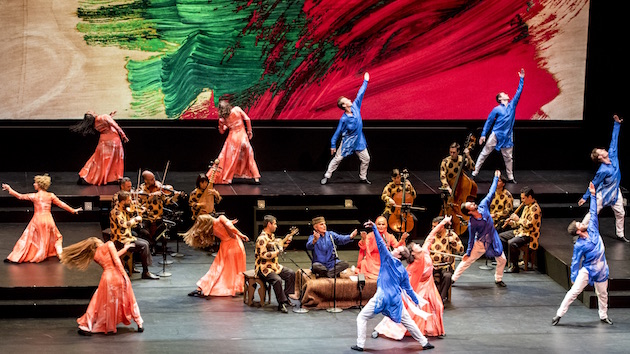 Layla and Majnun, choreographer Mark Morris’s 13th work to have its world premiere at Cal Performances, is a delight. The piece, slightly over an hour long, combines — with concision, precision, heart and brio — all the qualities that are best in Morris’ aesthetic.

It’s a new telling of an ancient (around 1100 CE) love story recounted and renowned not in this world but in a faraway land, Azerbaijan, a Muslim nation in Transcaucasia, bordered by Russia, Georgia, Armenia, and Iran. That was one of the things that made Morris want to bring it to American audiences, making it a quasi-political act from someone who generally steers clear of politics in his art. He came to it through Yo-Yo Ma and his Silk Road Ensemble (another case of West meeting East), and it was at Ma’s invitation that it all came to pass. Originally a lengthy opera — Azerbaijan’s first — composed by Uzeyir Hajibeyli, it premiered in Baku in 1908. It included the characteristic traditional and folk music improvisations that go with the ancient story. Now the Silk Road Ensemble has condensed it for presentation.

The stage, with a backdrop and costumes designed by Howard Hodgkin, combines a platform for the musicians and performance space with risers for the 16 dancers of the Mark Morris Dance Group. It looks like tight going, but it works well with Morris’s close-cut, intensely rhythmic, folk-based patterns that have the women and the men separated, always somehow slipping by each other.

The sides shift as fluidly as the two title roles, which are played by four different couples in the first four acts, with a finale that incorporates them all. Mood and nuance shift from scene to scene, and the four couples — Stacy Martorana and Dallas McMurray, Nicole Sabella and Domingo Estrada Jr., Laurel Lynch and Aaron Loux, and Lesley Garrison and Sam Black — eloquently show us the delight and despair of their love.

No wonder Majnun is going mad, which is what Majnun means; in the Arab world, “majnun” is synonymous with a crazy guy. He’s in love with Layla, but her parents want none of it. They’ve chosen a man for her, and she is helpless to fight the wedding, where she reaches toward Majnun, but can never quite get to him, nor he to her. Supertitles are a friendly help here if you speak no Azerbaijani, but the intensity reached every corner of the audience, especially at the moment where, grief-stricken, Layla suddenly collapses in her friends’ arms. The gasp was audible. There are some amazing ideas in here, notions of such emotional abnegation that it’s been thought the whole Layla and Majnun story is a parable for the love and sacrifice required by God. Layla, for example, says she loves being so unhappy that she cannot join Majnun, and wishes only to suffer more. 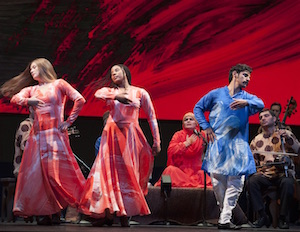 The way Morris instills a sense of community while hewing to the traditional Muslim separation of the sexes is not unlike some passages created by Jerome Robbins for the Jewish wedding scene in Fiddler on the Roof. It’s not such a reach, really; both artists fluently capture folk idioms and intimacies while maintaining a certain societal distancing between men and women. The women link arms and hands; so do the men. But that separation is maintained, both in the corps, or community, and in the world of the central characters, the lovestruck and ill-fated couple, Layla and Majnun. Rock enthusiasts might be familiar with Eric Clapton’s anthem about the unattainable “Layla,” which was based on a setting of the tale Clapton read in book of poems by the Persian poet Nizami Ganjavi.

Layla and Manjun and the other dancers are couples without any coupling. They don’t touch, they don’t cling, nobody gets lifted. The women’s costumes (executed by Maile Okamura) are plainly cut and modest, with long sleeves and long circle skirts. The only time they fly up is when the women spin, a move that may refer to some Sufi beliefs of self-sacrifice that are incorporated into the story. The women are in vibrant orange and white print; the men are in white pants with deep blue blouses. The singers, too, are in bright orange and blue, while Hodgkin’s shimmering backdrop of red and green looks like finger painting. The lighting, designed by James F. Ingalls, includes flickering candles. Everything is aglow.

As sung on the Zellerbach stage Sunday afternoon by two revered Azerbaijani artists, Alim Qasimov as Majnun, and his daughter, Fargana Qasimova, as Layla, the music embodies haunting melodies in minor keys. An opening act with singers accompanying themselves on small drums and Azerbaijani musicians on kamenche and tar set the tone for the evening. The beginning was a good warmup for listening to the subsequent melodies of the dance portion, when Silk Road musicians joined in on a mix of eastern and western instruments — violin, cello, bass, viola, shakuhachi, and also the pipa, played by Wu Man. 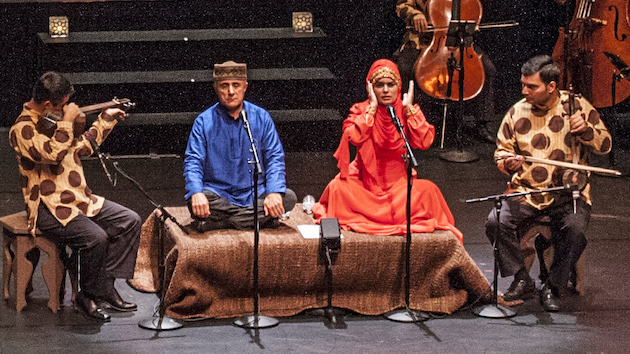 The dancers’ movements, in all, exemplify what is great about Morris’s style — forthright carriage embodying its own elegance, bends that are deep and sustained, arms rising high and eloquent but not above being floaty, or flicky and just a little silly, when warranted. There’s no showboating in his dancers; you could watch them forever, waiting to see what’s next. Sometimes, in its plies and fluidity of the torso, the choreography is straight out of the Martha Graham playbook, and at other times, feet (in soft shoes) tap the floor behind them, clippity-clip.

Not for nothing did Morris spend his formative teenage years in a Balkan folkdance group, and at his best, those traces and that momentum permeate his work. He’s been spending a lot of time on classical western themes — King Arthur, Acis and Galatea, but this equally classic tale, which has been called the Romeo and Juliet of the Arab world, gives us a new lens through which to delight in a superb dance maker, with a company to match. 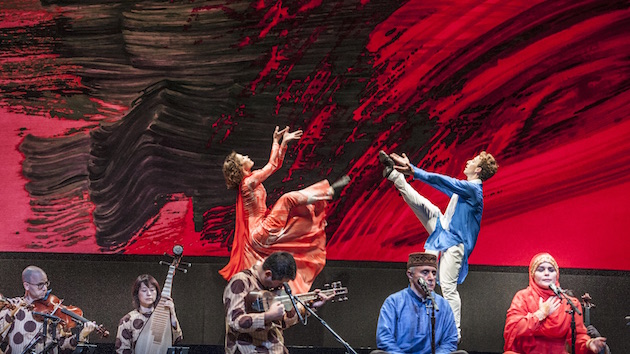