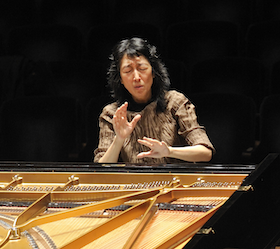 Exciting as it is to hear an artist play live for the first time, especially one whose recordings have raised expectations as high as those of pianist Mitsuko Uchida, it can also be a daunting experience. The fact that Uchida has played so rarely in the Bay Area — the last time was a decade ago — means that while her development as one of the outstanding pianists of her generation has been no secret (for her concerts are usually sold out), her true stature hasn’t been properly appreciated.

Glenn Gould quit playing in public because he didn’t want to compete with his own recordings. He even claimed he hated audiences, comparing them to spectators at a kind of blood sport: the so-called virtuosos who chose flashy pieces to close their programs so as to satisfy the lowest common denominator in the audience. Artur Schnabel, who claimed both halves of his own programs were boring, coined a term for this type of performer: “trashoso.”

Mitsuko Uchida, while possessing a virtuoso technique of the first order, is the opposite of the trashoso. But she is also not a typical virtuoso, either. The two sublime masterpieces by Schubert and Beethoven she chose for her Berkeley debut, presented by the Koret Recital Series for Cal Performances (ticket price: $100), wonderfully revealed gifts of delicacy, eloquence, and intelligence in almost ideal proportions. In any case, it’s the music that one remembers, along with the passion and care that went into its performance.

Schubert’s Sonata in G Major, Op. 78, which Schumann thought his most original work in the genre, was originally published under the misnomer Fantasie-Sonata. By contrast, Beethoven’s Diabelli Variations, Op. 120, had as its genesis a publicity stunt that was to include 50 other composers. In many ways the Sonata and the Variations seem polar opposites — the yin and yang of the piano literature of the 1820s — and playing them back-to-back seems the pianistic equivalent of shooting for the moon.

The Schubert Sonata begins and ends in a whisper. It’s a work that Uchida clearly revels in, as ravishing pianissimo passages are almost a specialty of the house with her. Schubert played it for his close friend Joseph Spaun and dedicated it to him, “out of the desire to give you as much happiness as I possibly can.” The floating chords of the opening seem to say, “Please don’t be in a hurry, and when you play this, kindly take the repeat.” Indeed, listeners like me often feel transported in the exposition to a place where they gain an unearthly sense of calm and ease, a realm from which the sonata form’s usual drama seems strangely absent. Hence the misnomer, Fantasie.

When the music veers into the key of C Minor, we shudder at its beauty, even as we are reminded of Beethoven’s Ghost.Although Uchida didn’t repeat the exposition, she did begin in such an expansive mood as to show her supreme confidence in her audience’s receptiveness. And we gladly followed where we were led: into true sonata territory in the development. At the triple fortissimo climax in the key of C minor, Schubert appeared to be channeling Beethoven. It seemed as right as it was unexpected. It turned out to be an intimation of what was to come much later in the recital, in a different context.

During intermission I felt that I’d been set up, or shaken up, even given a wakeup call before the sublime/ridiculous set of pieces that was to begin shortly. Beethoven’s pupil Czerny said that the 33 Diabelli variations were written in “a merry freak.” The three years he spent working on them were like the ascent of a great mountain peak, a climb that began with high spirits and led to regions unexplored before (or since).

The piece strips down the music to voices that no longer mock the theme, but seem to find depths that no one else could probe. Uchida created a solemn mood where time seemed to stand still.

Nevertheless, the hike was full of delight. Uchida underlined the broad humor in some of the early variations while steering the work toward a summit that could only be sensed but not fully viewed from the lower altitudes. The alternation between 3/4 and 4/4 time when Beethoven seems to go slightly mad, making us forget the not-so-graceful waltz and introducing marches and dotted rhythms over boogie-woogie basses, was hilariously realized.

It wasn’t until Variation 20 that I began to suspect that I was in for a lot more altitude and might even need supplemental oxygen. The piece strips down the music to essentials: voices that no longer mock the theme, but seem to find depths that no one else could probe. Uchida created a solemn mood where time seemed to stand still. This was further reinforced in Variation 24, a little fugue that astonished me with a simplicity that brought the ultimate goal of the later variations into proper relief.

There came a tense moment, a kind of musical cliff-hanger, right after the variation above when Uchida seemed to have captured her audience for all time. In the next variation, though, she seemed to lose her balance momentarily. While the right hand is playing the old um-pah-pah rhythm and the left hand is meandering around in a most undignified manner, we seemed to be teetering over the abyss. It only lasted a moment, and though she hardly missed a note, she still decided to skip the repeat. It brought a smile to my face, as it showed the humanity of both composer and performer.

There really are no words to describe the beauty of the three variations (29–31) in C Minor, which are like stations of the Cross. They showed the depth of Beethoven’s grief — perhaps the struggles with his nephew Karl that led the young man to attempt suicide? It didn’t matter. Uchida had taken us to where humor and high seriousness meet.

It had been a steady, if treacherous, ascent to the climactic Fugue, played with a dazzling combination of precision and abandon. It all led to the final transformation of Diabelli’s waltz into its classical forbear: the old-fashioned, yet somehow so much more dignified minuet. It was a region that showed why we need to hear playing on this level. I hope it won’t be a decade before Mitsuko Uchida returns.