The unlikely Simón Bolívar Youth Orchestra of Venezuela seemed to be having an even better time in Davies Symphony Hall Sunday evening than the audience, even while it drove the audience into something approaching a hysteria of enthusiasm.
In 50 years of covering orchestral concerts on four continents, I have never encountered anything even close to such unlikely musical splendor. Of course, having Conductor Gustavo Dudamel, conductor designate of the Los Angles Philharmonic, on the podium added much to the general excitement. 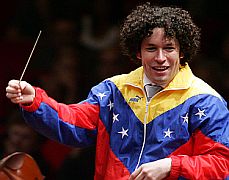 Split right down the middle, the first half of Dudamel's program was devoted to Dimitri Shostakovich's grimly serious Symphony No. 10 in E Minor, Op. 93. By contrast, he turned the second half of this nearly three-hour event into an exploration of Latin American music. Dudamel opened with Leonard Bernstein's Symphonic Dances From West Side Story, followed by some of Arturo Márquez' Danzones (part of a series written in the 1990s) and then the four-movement Suite from Alberto Ginastera's 1941 ballet Estancia, Op. 8a. Encores were literally that: repeats of movements from the Márquez, Bernstein, and Ginastera works. However, there was far more going on during the encores than the musical performances. (But more on that anon.)

The performances were miraculously professional, for this is no run-of-the-mill youth symphony. The orchestra was founded in 1975 by José Antonio Abreu, a professor of economics and a composer, organist, and congressional deputy in Venezuela, in a daring plan to stem juvenile delinquency by offering serious music training. It provided kids not just with music but also with a sense of pride in belonging to an orchestra rather than a gang.

Under government sponsorship, the orchestra seeks out youths from all walks of life, and in particular those ages 12 to 26 from underprivileged backgrounds. They are furnished with free instruments and given professional-level instruction in performance throughout Venezuela. Estimates of those now in the program run between 160,000 and 250,000 students, with the ambition of expanding that to 1 million.

The 200 young instrumentalists on the current tour amount to the flagship unit of that effort. For the orchestra's recent success in New York, it fielded an astonishing 600. (Conductor Dudamel is himself a violinist product of that program.) I should add that most of the players looked to be on the high side of 20. Of course, some of us are old enough to remember a time when virtually all large U.S. high schools had an orchestra, a chorus, and a band. Politicians had different priorities back then.
Superbly Assured Performances
What is even more amazing was the professional quality of the performances: as good as, or better than, most major world orchestras. The student orchestra has toured and been raved at widely on the international scene, so I expected that technical matters would be in good order. They were. Not the least amazing was the timbre of the orchestra, which was richly rounded in tone. I gather it possesses terrific instruments.

The larger surprise was the orchestra's spot-on sensibility to style. The profundity of the Shostakovich was moving, highlighted by sensational individual solos. The outstanding Tenth — for me, his greatest symphony — opens with a long passage for strings alone. Then, as from a distance, a haunting tune appears for solo clarinet.

That was so superbly played that I choked up a bit. It also made a point about the orchestra's depth, for that clarinetist moved over to play third clarinet for the Bernstein. One player proved to be as fine as the next. I've not heard the virtuoso Scherzo played with more violence or speed since the old Columbia recording by Dimitri Mitropoulos and the New York Philharmonic.

My sole complaint is that certain of the percussion players, notably those on timpani and cymbals, were overplaying their dynamics. I doubt that ancient galley drummers made that much racket. After all, it's always easier to get volume by striking an instrument than by blowing into it or dragging a bow across it. (There's no need to exaggerate to make yourself heard, boys.)

Then came the Latin repertory, and a totally new sound — the sound of smiling romps. If anything, the playing was even finer, but then, if South Americans can't play Latin style perfectly, who can? Phrasing and balances were ideal for all those dance pieces, be they Bernstein's Puerto Rican parodies, Mexico's Márquez' dance styles of Cuba and Veracruz, Mexico, or Ginastera's early (and, for him, conservative) studies of Argentinean country life. (The original ballet was commissioned for Ballet Caravan, ancestor of New York City Ballet, with George Balanchine as choreographer.)
Wild Antics in the Encores
All this, though, was nothing compared to the goings-on during the encores. Bernstein's score calls for some members of the orchestra to occasionally snap their fingers on accents during the Mambo. Usually that falls to the percussion section, as other players might drop their instruments. Not here.

Entire sections, including full strings, were snapping away, and at one point they even yelled out "Mambo!" while playing. That, or individual players or sections would leap to their feet to jiggle rhythmically. During a few bars the strings grabbed their stand partners and danced as the music continued. The whole thing was wonderfully insane.

Bows were also unusual. At one point all the orchestra players lifted their instruments high over their heads, shaking them to give the audience the opportunity to appreciate the indispensable instruments. In another first for me, all the musicians turned their backs on the main auditorium, to bow to the audience seated in the U-shaped terrace around the stage. How charming can you get?

Then came yet another first. When it finally seemed that the evening was done, the house stood as if to leave. Then suddenly all the lights went out. Much of the audience was whistling to attract attention backstage, probably thinking that some stagehand had thrown the wrong switch. But no, a final surprise awaited.

Lights came up after a minute or so to reveal the orchestra bedecked, not in its formal black and white but all wearing jackets emblazoned with the Venezuelan flag. The audience had a good laugh, even before conductor Dudamel emerged, also in a flag jacket, for yet another Latin dance encore. The house went bonkers as everyone yearned for more.

And that's the last thing I remember before fainting.