For young pianists, it could be tempting to build an international career on Chopin alone. After all, the unequivocal “Poet of the Piano” wrote almost exclusively for the instrument, and left us with some 20 hours of poetic, if often nationalistic, piano music. As the gold medalist at the prestigious Frédéric Chopin Piano Competition in 2005, Rafal Blechacz is among the select few who evidently were chosen to carry Chopin’s torch to an international audience. 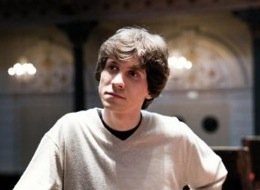 On his second visit to San Francisco, Blechacz opened Sunday’s program at Herbst Theatre with the seldom-heard Nine Variations on ‘Lison Dormait,’ by Mozart. With his clear tone and light touch, he created a soundscape more reminiscent of the period instrument than the nine-foot Hamburg Steinway that occupied the stage. Never overwhelming or harsh, the joyous atmosphere he conveyed, enhanced with the deft use of his pedaling left foot for contrasts, was transparent and shimmering. His right-hand trills accompanying the left hand in the 4th and 8th variations were flawlessly delivered and brought on mental giggles. It was the perfect amuse-bouche for the sunny afternoon.

The delightful Mozart was followed by Debussy’s L’Isle joyeuse. The pianist’s clarity of tone carried into this piece, which is too frequently turned to mush from careless pedaling or lazy articulations. His colors were vibrant, almost Gauguinlike, though the “Isle” (and not the French word for an island, which is île) was the Isle of Jersey, and the painting that inspired Debussy was an 18th-century painting, L’Embarquement pour Cythère, by Watteau. While delivered with much richness, the triumphant ending was a bit too polite, betraying the composer’s euphoric elopement with Emma Bardac. The climax would have benefitted from uncontrollable ecstasy by pulling out all the figurative stops and letting the entire instrument ring full of overtones.

An Extravaganza of Polish Music

Composed in 1903–1904, Szymanowski’s Sonata No. 1 that followed was one of the composer’s earliest compositions, drawing much inspiration from his countryman, Chopin, though with some significant influence from Richard Strauss and Wagner. It is a passionate work, with a good deal of drama and inner anger, perhaps an apt representation of the insurrection against Poland’s ominous neighbors.

Blechacz played the first movement with absolute meticulousness, with hardly a note in the wrong place. Yet it again sounded somewhat restrained and cool. Several of the more ardent passages could have been broadened to intensify the passion. It was more Michelangeli than Argerich.

Still, the following movements were full of humor and sweet textures, particularly in the lovely, music-box–like Menuet movement. Then the intense fugal section of the final movement cut through the air decisively. The waves of long crescendos in the last five or so pages of the score kept growing and growing like a giant tsunami, bringing the music to a gargantuan finish.

After intermission, Blechacz presented an all-Chopin program, consisting of two Ballades, two Polonaises, and four Mazurkas. Undoubtedly, this was the part that a large portion of the audience came to hear (a lot of conversations in Polish were heard in the lobby).

The opening octave C of the first Ballade made a statement on its own. Indulgent yet majestic, it seemed to have stopped the rotation of the Earth. Then, the music metamorphosed from the opening key of A-flat major into G-minor like magic, but deliberately. It was clearly evident here that Blechacz was in utmost control of every aspect of the music. The flighty right-hand parts were executed with utmost control and dexterity, and the music breathed so longingly with life. The subtle wavering of the rhythm brought out the yearning and the wistfulness in the poetry. Such masterful control of every aspect of the music, in turn, brought out freedom and jubilance, in its own paradoxical way.

The two Polonaises, Opus 26, were presented with similar determinations and loving care, as well. Vibrant colors bloomed and the joyous lyrical lines were limned with flair, and the drama and passionate nationalism were barely contained within the notes. The four Mazurkas, Opus 41, were played with intimacy and much tender love. Blechacz painted the pastoral scenes and intimate circle of villagers with intricate details, creating a soundscape that transported us back to the time when the mazurka became a sensation throughout Europe.

Chopin’s stormy and bipolar Ballade No. 2 concluded the recital. By then, the entire audience seemed completely captivated and transfigured. The peaceful first theme brought us calmness, but the tempestuous second theme was unleashed with much force and drama, again with calculated measurement, reminiscent of the late, great Arthur Rubinstein.

Here, we were witnessing an emerging titan. Rafal Blechacz’ mastery of Chopin’s music is impeccable, and he was certainly worthy of the honor he received in Warsaw in 2005. Yet, the test of time awaits him to decide whether he would be among his predecessors, such as Argerich and Zimerman. He certainly has more than abundant capability and dedication to his art form, though the jury is still out on whether he will earn a place among the greats. This may depend on whether he will deliver the same level of polish on vastly different works by other composers. I eagerly await his next return to hear a wider range of repertoire.

At the recital’s conclusion, most of the elated audience rose to their feet and were rewarded with two encores: Chopin Nocturne, No. 20 in C-sharp Minor, and the scherzo movement from Beethoven’s second sonata, Opus 2, No. 2.