Cello recitals have rarely created the kind of audience reactions witnessed Thursday evening at Herbst Theatre, under the auspices of San Francisco Performances. There, cellist Alisa Weilerstein and pianist Inon Barnatan blew the crowd away with several performances of a lifetime — all the while largely avoiding repertoire that is frequently performed. That's doing it the hard way. 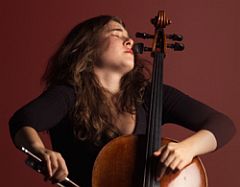 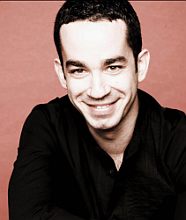 While all the performances were fine, the performances of Kodály's big dreadnaught unaccompanied Sonata and of Chopin's Sonata with piano set a new standard of excellence, in my experience. The Kodály is easily the largest, most imposing, and most difficult composition to date for solo cello. All sorts of special techniques are employed, such as left hand pizzicatos while simultaneously bowing the strings, fierce double stops at fast tempos, plus excursions into the instrument's ionosphere at the very top of the fingerboard.

It is made no easier by the fact that the lowest string has to be tuned down from C to B. This scordatura false tuning means that the notes are not where the cellist is accustomed to finding them. In a work with a 35-minute-plus running time — 36 if you play it really well — it all amounts to a heroic effort at concentration throughout. Enter the fatigue factor.

That false tuning goes all the way back to early lute and violin music, though that historical fact doesn't make it feel any more comfortable for the cellist. It does, however, give a bit more resonance to Kodály's B-Minor tonality. The odds against a listener's hearing a completely note-perfect, emotionally controlled presentation over the course of the score's three movements are more than he can expect, apart from a recording. Recordings can be edited into perfection. But, by Zoltán!, Weilerstein pulled it all off brilliantly, and managed to made it seem almost effortless.

The performance drove the audience into something approaching hysteria. One person seated near me was heard to say, "I feel exhausted just listening to it." I, on the other hand, simply sat there, wondering if I'd just heard what I obviously had. This didn't make it any less discombobulating.
Lofty Musicianship
Chopin's late Sonata offers a different sort of problem. First, it is not intuitively strong music. Then too, it sounds more like a piano sonata with a lesser cello part tagged on. All the bravura — and there's lots of it — is handed to the pianist. But here the high musicianship of this pair pulled it off, greatly helped by the excellent pianism of Barnatan.

His sense of color and fidelity to dynamic markings were remarkable in themselves. Meantime, Weilerstein's glowing sound and feeling for phrasing proved important assets. The Sonata ended up sounding more convincingly strong and better made than I had ever imagined it could be.

Golijov's Omaramor, a compound of omar and amor, is set as rhapsodic variations on a song (My Beloved Buenos Aires) by Argentina's musical hero, Carlos Gardel. A singing composer and a handsome actor of the mid-1920s to 1930s, Gardel did much to internationalize tango. He died in young middle age in a 1935 plane crash, yet his recordings are still much played and loved in his native land. He receives a sort of unbridled admiration that is analogous to the Austrian deification of Mozart. (You artists want to be idolized after death? Die young!)

It's a very flashy virtuoso piece commissioned by the Omar del Carlos Tanglewood Fellowship, named after the exiled Argentinean playwright. The success of Omaramor depends heavily on the virtuosity of the cellist playing it. With Weilerstein on stage, success was assured. Yet, purely as a piece of music, Omaramor doesn't scan very well. I did not get a sense of its moving smoothly from one episode to the next. Rather, I could almost hear every time Golijov put the pencil down for the night.

The duo offered a most assertive account of the Beethoven Fifth Sonata during its first and fourth movements, wonderfully balanced to bring out all the interweaving lines. Yet the high point turned out to be the charm of the Scherzo and the melting lyricism of the rather long slow movement.
Extraordinary Communication
Weilerstein and Barnatan played the entire program as if they were a single telepathic unit. She could be facing the audience and he not watching her, yet all entrances or sudden chords were precisely played together at the same instant. No head bobbing or other gestures accounted for that, as there was no sign of either.

Barnatan, needless to say, played a wonderfully adroit performance of Chopin's giant nocturne, his Barcarolle. There was something about F-sharp keys, whether major or minor, that always brought out a special depth in Chopin. His big F-sharp Minor Polonaise, Op. 44, is sometimes nicknamed "The Tragic," and boy, is it ever.

Despite the Barcarolle's major key, there's something terribly melancholic about the piece, even when the music sounds superficially pleasant, as in Schubert's smiling-through-tears music. Capturing that knife's edge of style is horribly difficult, and Barnatan landed right on the spot of the matter. He simply played it with just enough rubato, free of exaggerations.

When all was done, the audience called the performers out for bow after bow after bow, and on and on, until the artists realized that an encore was not being asked — it was being demanded. So out they came to play Mendelssohn's modest Song Without Words, Op. 109.