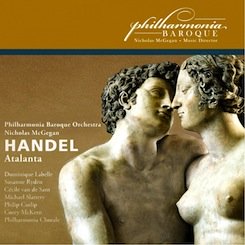 There are composers that it seems impossible to come to the end of. Mysteriously, they seem to cluster in the 18th century. Philharmonia Baroque Orchestra’s 2005 concert performance of Handel’s 1736 opera Atalanta, now released on CD (and, so far as I can tell, the only recording of the work in print), is this month’s reminder that it’s very difficult to run out of Handel you don’t know.

Well, OK, there is a little Handel in there that a lot of people do know. Meleagro’s aria “Sì; mel raccorderò” (Yes, I’ll remember) is essentially a sketch for “Let the Bright Seraphim” (from the oratorio Samson, written five years later), minus the brilliant trumpet obbligato, if you can imagine such a thing.

But back to essentials. Atalanta’s plot is made out of the usual materials of comic opera: Everyone is constantly misunderstanding everyone else. But it’s built also on the fondness of 18th-century aristocrats for playing at being commoners. Atalanta (a princess) and Meleagro (a king) are masquerading as a shepherdess and a shepherd; they fall in love, but each believes the other is a peasant, so marriage would be out of the question. Meanwhile, another pair of lovers, genuine peasants, try to inflame each other’s jealousy by playing up to the other two.

Atalanta (Dominique Labelle) and Meleagro (Suzanne Rydén) are both soprano roles. (Meleagro was originally performed by a castrato.) It’s fortunate that Labelle and Rydén have such different voices, because their two duets are among the best things in the opera, and if the singers were any closer in timbre it would be difficult to tell who was singing what. Labelle’s is a big but cool voice, luminous and lustrous. Rydén’s is smaller, tighter, with a faster vibrato.

Cécile van de Sant, who sings Irene (the actual shepherdess), has a warm and voluptuous mezzo-soprano voice. She gets what’s really the plum aria of the lot, “Come alla tortorella” (Like the turtle-dove), one of those little masterpieces that Handel seemed to reserve for the key of E major. She spends most of the opera wondering whether her betrothed, Aminta (Michael Slattery), is in love with her, or merely with her dowry. Slattery, for his part, goes a bit over the top once or twice in sobbing-tenor mode, but in the main his clear, forthright singing is magnificent.

Nearly anything might happen, in the way of embellishment, and while in a few places enthusiasm perhaps gets in the way of good judgment, most of the time the results are exhilarating.

In smaller roles are baritone Philip Cutlip, sturdy and resonant as Irene’s father Nicandro, and baritone Corey McKern, who as Mercurio (Mercury) descends from the skies to bless, ostensibly, the two marriages of the opera, but also the marriage of the Prince of Wales, for which occasion the work was written.

There’s a running joke among musicians that the two saddest words in the Italian language are da capo (“from the top”). Not so here. This cast knows what da capos are for, and keeps its audience alert. Nearly anything might happen, in the way of embellishment, and while in a few places enthusiasm perhaps gets in the way of good judgment, most of the time the results are exhilarating. I think the cadenzas to the second Atalanta/Meleagro duet, “Caro/Cara” (Dear one), are the high point, but really there isn’t any da capo number here where the ornamentation the second time around isn’t both unexpected and striking.

For a piece that involves horns, trumpets, and a chorus, Atalanta is very lightly scored. Nearly everything is strings-only, with unison violins (no violas) more often than not. The nimble PBO strings, with their variety and subtlety of articulation, are a delight. The big guns arrive only in a few places, though Handel makes the most of them when he does use them. The chorus that opens the second act is one of those Handelian triumphs: a theme that you’d at first think was a toddler picking out something with one finger on a keyboard, but quickly grown into something much more.