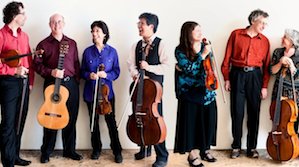 The spirit of Robert Schumann was a palpable presence throughout the Left Coast Chamber Ensemble’s excellent program Thursday night in Mill Valley’s 142 Throckmorton Theatre. “To Schumann With Love” may have featured only one of its namesake’s scores. But each work on the well-structured program revealed its own connection to the great Romantic composer’s enduring influence. And, like all of Left Coast ’s endeavors, the evening married standard repertoire and contemporary works in provocative and beguiling ways.

Thursday’s concert, which repeats Monday evening at the San Francisco Conservatory of Music, began with Brahms’ Op. 118 Intermezzo No. 2 in A Major. Composed in 1893, this is a mature, reflective score, and this performance, presented in an arrangement by Jenny Sperry for oboe, English horn and piano, brought forth its pensive melodies and gentle shadings in a shapely reading from Left Coast players Tom Nugent (oboe), Andrea Plesnarski (English horn) and Eric Zivian (piano). The performance was dedicated to the memory of San Francisco Symphony principal oboist William Bennett, whose death last month at age 56 was an immeasurable loss to the Bay Area music community.

Brahms, of course, adored both Robert and Clara Schumann, and Nugent and Zivian turned next to Clara Schumann’s Romances for Oboe and Piano. Clara’s music is steadfastly overlooked by many Bay Area music organizations (oh, for the days of the Women’s Philharmonic!) and it was a pleasure to hear this lovely score’s flowing, long-breathed melodies played with such warmth and fluency by Nugent. Zivian made a precise, buoyant partner.

It was a pleasure to hear this lovely score’s flowing, long-breathed melodies played with such warmth and fluency by Nugent. Zivian made a precise, buoyant partner.

If Olli Kortekangas’ Aveux, Hommage a Robert Schumann represented a decided stylistic shift, it was no less abashed in its admiration for the master. Presented in its U.S. premiere, the 2010 score for string quartet and oboe is based on the Aveu movement of Schumann’s Carnavale for solo piano, and recalls a measure of that work’s effusive spirit.

Kortekangas doesn’t often turn up on chamber music programs — the Finnish composer is better known for his choral music and operas — but Aveux was dazzling. It consists of a theme and four variations, with an epilogue and a short oboe cadenza; the main theme is deceptively simple, but the variations — alternately sinuous, agitated, fragmented and arioso — are marvelous. The oboe’s the star player, and Plenarski made it sing; joined by violinists Anna Presler and Hrabba Atladottir, violist Phyllis Kamrin and cellist Leighton Fong, the group introduced the work with clarity and considerable exuberance.

The 12-minute score for string quartet relishes the relationships between technology and pure sound ... and the players gave it a gutsy, go-for-broke performance.

After intermission, Presler, Atladottir, Kamrin and Fong returned for the West Coast premiere of Ryan Carter’s too many arguments in line 17. The 2012 winner of Left Coast’s annual competition contest was a far cry from Schumann’s lush Romanticism — the 12-minute score for string quartet relishes the relationships between technology and pure sound — but its volatile contrasts weren’t out of place in a Schumann tribute, and the players gave it a gutsy, go-for-broke performance.

Contrasts were also the raison d’etre for Zivian’s Florestan and Eusebius for Violin and Piano. Named for Schumann’s alter egos — the former a passionate extrovert, the latter a melancholy dreamer — the compact score also quotes from Carnavale. This was its maiden voyage, and Presler and Zivian ushered it into the world with admirable brio.

Presler and Zivian saved the best for last, though. Closing the program with Robert Schumann’s late-life Violin Sonata in A Minor, these two artists summoned an enveloping atmosphere of turbulence and rapture. The first movement sounded lush and gorgeous; the central Allegretto lacked nothing in wit and charm. The whirling finale seemed the essence of Schumann’s restless, mercurial spirit; this was a deeply felt performance from Schumann, with love.