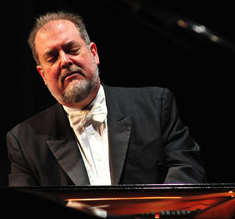 It is always a privilege to hear the best of the best, even once in a lifetime, but it is altogether another to hear the same twice in a span of just a few months. Such was the extraordinary confluence of hearing that titan among the titans of the piano, Garrick Ohlsson, for the second time this year, and to share my thoughts.

And what better venue is there than the new Weill Hall at the Green Music Center? With its warm acoustic space enveloping the audience, and with the dusk adding a glow to the atmosphere, it seemed the perfect stage for a recital program of profound depth.

Central to the evening’s program was the Busoni transcription of Liszt’s Fantasy and Fugue on the Choral “Ad Nos, Ad Salutarem Undam,” S. 259. The work, originally composed for the organ, in piano solo transcription employs all the possible colors and timbres of the original instrument. With the dark religious wars of the 16th century as the subject matter in the opera Le Prophète, by Meyerbeer, from which the theme is borrowed, Ohlsson brought forth the bleakest and the darkest of the steely landscape. The rumble of the lowest octave of the Hamburg Steinway shook the air in horror, while the mournful prayer in the middle was solemn and pure. It was the staggering contrast and range of emotions flowing so transparently and effortlessly that revealed this artist’s true greatness.

It was the staggering contrast and range of emotions flowing so transparently and effortlessly that revealed this artist’s true greatness.

After intermission, Ohlsson presented a sextet of études by Debussy. Rather than presenting them as finger-twisting, insurmountable technical challenges for pianists, he delivered this collection with witty and sarcastic humor, depicting the humiliation that piano students often experience during lessons and in practice rooms. In particular, Pour les “cinq Doigts”– d’apres Monsieur Czerny opened perhaps as an illustration of a young student playing in front of an indifferent teacher.

Halting and stuttering, the confidence of the student wilted away while the teacher’s beating of a stick resonated in the room. In contrast, Pour les huit Doigts, performed without the thumbs, flowed into the air like a spool of ribbons and concluded with a dry punctuation at the end, eliciting laughter from the delighted audience. Although the composer intended the études to be a warning to aspiring pianists, Ohlsson’s fluidity made the entire collection sound effortless.

In all, it made for an evening when words like divine or timeless greatness came to mind. I cannot wait to hear Garrick Ohlsson perform again.

Liszt and Debussy were sandwiched between two masterpieces by Brahms and Chopin: Two Rhapsodies Op. 79 and the Fantasy Op. 49, respectively. Ohlsson was in no hurry to rush through these pieces, often an important flaw shown by lesser artists. Rather, he placed every note deliberately and clearly, uncontaminated by careless or indifferent pedaling. And he also took advantage of the lively acoustics of the hall so that none of the details were lost in the air, and none of the reflected sound collided with the notes projected from the piano. The granite-like solidity of his playing anchored the music firmly to the earth, establishing a foundation for the majestic architecture, built on multiple counterpoints. Such confidence was also instrumental in earning the trust of the audience that was taken on such a satisfying journey.

The two encores, a Chopin waltz and a Rachmaninov prelude, both in C-sharp minor, were no less trivial than the massive program that preceded them. Ohlsson revealed many layers within the waltz, giving an illustration of the complexity beneath its surface. The Rachmaninov, certainly a crowd pleaser, was unusually explosive, yet with none of the harshness that often accompanies a passionate reading of the piece. In all, it made for an evening when words like divine or timeless greatness came to mind. I cannot wait to hear Garrick Ohlsson perform again.