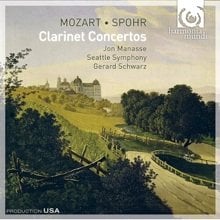 Accompanied and partnered by the Seattle Symphony under Gerard Schwarz, this recording sets the bar high for all future clarinet CDs. Along with the ultrafamous Mozart Clarinet Concerto in A Major, K. 622, Manasse includes Louis (or Ludwig) Spohr’s Concerto No. 2 in E-flat Major, Op. 57. (Harmonia Mundi HMU 907516.)

All the basic virtuoso qualities — intonation, rhythmic accuracy, flawless phrasing, and the like — are to be heard in Manasse’s playing, yet what sets him apart is his exceptionally beautiful sound. Hearing his warmth of tone in all registers is like listening to a top-class vocalist or violist. It’s radiantly gripping. Several times in my first playing I found myself murmuring “wow.”

The New York Times called Manasse, “absolutely first-rate,” though for me his moving performances amount to even more than that. Normally, when hearing a woodwind soloist, I find myself listening to formal aspects of the score: the “A” theme, the “B” theme, key shifts, a development doing this or that, and such. But with this CD I kept fixating on Manasse’s fluency and his ability to maintain his basic timbre throughout the instrument’s register.

He certainly is busy enough, playing in the Metropolitan Opera Orchestra, at the Mostly Mozart Festival, and with the Orchestra of St. Luke’s, besides teaching at the Eastman School of Music School and Juilliard. More, Manasse is acting artistic director of the Cape Cod Chamber Music Festival. ’Tis a wonder he has time for international tours and recordings. (Does the man never sleep?)


He also has a sense of repertory obligations, playing all sorts of unusual works, and has even commissioned new works. A case in point is the unreasonably neglected music of Spohr, a major German composer and violin virtuoso of his day. Living 1784-1859, he was a contemporary of Beethoven, Schubert, and Weber, and eventually of Mendelssohn, Schumann, and Berlioz. As a touring violinist he certainly would have heard their music. His compositions lean toward the first three mentioned, yet he was no copy cat.

One mildly unusual feature in the second of Spohr’s four Clarinet Concertos is that the instrument plays a short solo during the opening to an otherwise formal first movement form. Mozart started that practice in his Ninth Piano Concerto, and it was furthered by Beethoven’s Fourth and Fifth. By 1810 — the date of this Spohr Concerto — it was becoming fashionable. Weber even opened his 1821 Konzertstück with the solo pianist. Spohr’s Concerto is definitely worth hearing, and having.

As for the Mozart Clarinet Concert, not much need be said other than that Manasse’s performance is most classy, as it includes excellently stylish orchestral playing under conductor Schwarz. As far as I’m concerned, the Seattle Symphony has always been underrated, just as the enormously productive Spohr and Weber are today.