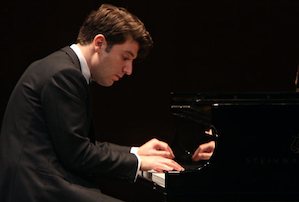 Rarely do you hear a pianist play two monumental, exhausting works back-to-back in one concert. Alessio Bax proved he had the chops, youthful stamina, and artistic insight for it, as his [email protected] recital paired an exciting performance of Beethoven's "Hammerklavier" Sonata, Op. 29, No. 6 with Mussorgsky's Pictures at an Exhibition.

Spanning nearly 50 minutes in length, it is Beethoven’s most arduous and profound composition. With the dark Adagio movement taking up 20 minutes by itself, it is not only a technical challenge, but also an enormous undertaking to keep the story together.

Bax who is a familiar face at [email protected] carried the audience through the epic journey with a sharp and determined sense of pulse. From the triumphant opening, announcing the arrival, to the finger-busting counterpoints of the fugue in the last movement, there was a granite-like discipline that permeated throughout. It was not that the rhythm was robotic or mechanical at all. Rather, the presence of pulse was well defined, to give music a solid framework. Such rigor helped maintain cohesiveness of the lengthy Adagio movement, and the blazing depiction of the fugue in the last movement, with crystal clear thematic elements and contrasting counterpoints. The momentum helped carry the fugue to its explosive and victorious end.

From the triumphant opening, announcing the arrival, to the finger-busting counterpoints of the fugue in the last movement, there was a granite-like discipline that permeated throughout.

It seemed, however, that Bax was struggling either with the New York Steinway D, or the rather dull acoustics of the hall. The sustain pedal was applied too generously at times, clouding over crisp details of the Scherzo, at times.

The second of the feasts was the beloved Pictures at an Exhibition by Modest Mussorgsky. More often heard as an orchestration by Ravel. A solo performance is relatively rare, and it was with much anticipation to hear how Bax would approach the work.

Bax opened with a bright rendition of the Promenade, perhaps not unlike the opening of the Ravel orchestration with a trumpet. The Gnomus were depicted as unpredictable, grotesque creatures so vividly, and the Ballet of the Unhatched Chicks were adorable, yet ridiculous. There was much humor, and lightheartedness that well depicted Hartmann’s sketches. However, the lightheartedness may have rendered the Old Castle and Bydło (Polish oxen-drawn cart) somewhat trivial, lacking in seriousness, and were performed much too fast. I wanted to feel each of the heavy, struggling steps of the oxen’s feet slogging through mud in the bitterly cold Polish winter.

The highlight among the pictures must have been the Marketplace at Limoges with its busy, frantic, rapid-fire pace. The depiction of the women at the market, shouting and quarreling with each other was colorful and at times comical. The Tuileries was also executed with a deft light touch, depicting the children playing and fighting in the gardens. The middle section, depicting a crying child being comforted by a nurse was sweet, though I yearned for more indulgence.

Throughout the piece, Bax added extra notes, often an octave below the lowest note, and filling the chords at other times. It was effective in certain places, such as the opening of the Catacombæ and in the triumphant ending in the Great Gate of Kiev. Yet, in other places, such as in Samuel Goldenberg and Shmuÿle, the extra notes upset the balance, making the sound overly heavy. However, replacing the full-range descending scale in the Great Gate of Kiev cascading chords was surprising but joyously effective.

After two such extravagant feasts, Bax offered but a short, delightful morsel of an encore: a piano transcription of Gopak from Mussorgsky’s unfinished opera, Sorochinsky Fair, perhaps as a footnote. I look forward to his next visit at [email protected], and I cannot wait to hear what his daring program will be.