Of the numerous summer music festivals in the region, the biannual Milton and Peggy Salkind International Piano Duo Festival at the San Francisco Conservatory of Music has stood out for its creative programming, as well as for the distinct piano ensemble repertoire it undertakes. 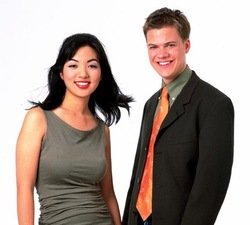 This year’s theme is a “Parisian Fête,” to celebrate Paris as an artistic center during its “golden age” from 1870 until 1925. The festival also includes a celebration of the 150th anniversary of Debussy’s birth, and highlights his contemporaries and some predecessors and successors.

Friday evening’s program started with a salon program titled “Société Musical Independente,” in honor of a society formed in 1910 by Fauré, Ravel, and others. The program opened with a loving reading of Ma Mère l’oye, which was premiered at the society’s first performance on April 20, 1910. Unlike the original premiere, though, Friday’s performance 102 years later included images and texts projected from a computer, adding an extra dimension to the experience.

It seemed as if everyone brought something special to the party for a celebration. Raffi Kharajanyan and Mutsuko Dohi presented a two-piano transcription of Debussy’s Le Cathédrale engloutie by Kharajanyan. Two pianos allowed them to explore soundscapes not possible on one piano, and in stereo.

Anderson and Roe had something very special. Instead of a duo performance, they sought to create a scene from a Parisian café in the 1910s. They first asked the audience to pretend that they were sitting at such a café, after enjoying one too many glasses of absinthe or other alcoholic beverage of the day.

It seemed as if everyone brought something special to the party for a celebration.

They then created a scene in which Erik Satie may have asked his friends at the café to help him through the reading of the music and the stories that went along with them. With members of the audience participating as a narrator or an actor, they presented selections of pieces composed in or around 1913, such as The Octopus and the Sea Cucumber, which were as silly as they sounded.

The more formal concert program later in the evening was titled “Impressionism and Beyond (1900–1925),” a celebration first of Debussy’s music then of that of his contemporaries.

The Bergmann Duo opened with a lush reading of the Ravel reductions of “Nuages” and “Fêtes” from the orchestral Nocturnes by Debussy. Rich with colors and textures, the glorious scene was presented with attention to the most minute and delicate details of the work.

Rich with colors and textures, the glorious scene was presented with attention to the most minute and delicate details of the work.

A six-hand transcription of Debussy’s La Mer, performed by Kharajanyan and Duo Turgeon, was full of waves and swells, evoking an expansive seascape. In the third movement, “Dialogue du Vent et de la mer,” it was as if angry wind collided with the sea.

The celebration continued with the Angelo Piano Duo’s emotional reading of En blanc et noir, composed in 1915 during the middle of the First World War. The somber second movement was particularly striking for its dark mood at the beginning, depicting the desolate war scene and then the confusion during a battle. 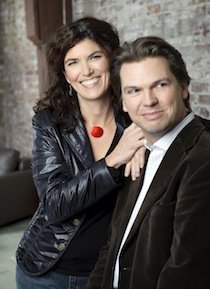 The second half of the concert began with two pieces by Ravel: a sincere reading of Rapsodie espagnole by the Bergmann Piano Duo, and La Valse performed by Anderson and Roe. Never shying away from controversy, the latter duo presented perhaps the most volatile and thrilling reading of La Valse.

Anderson and Roe began with a mysterious yet reminiscing rendition of 19th-century Vienna. Every phrase was sculpted with sensual intentions, but in the macabre coda both crescendo and accelerando went insanely off the charts, bringing the piece to a disconcertingly manic end. A question remained whether it was even in good taste with the frenetic storm, but I’d simply call it true to the depth of the music’s soul that few dare to explore.

The Duo Pianistico di Firenze performed a splendid reading of Cinema (1924), accompanying a silent film titled Entr’acte by Réné Clair in which composer Erik Satie himself appears. Though this was a piano reduction by Darius Milhaud, the duo humorously navigated through Dadaist elements of the instanéisme full of irreverence.

The Salkind Festival continues with more performances, including a dance program in collaboration with the Mark Foehringer Dance Project, plus an evening program spanning two hundred years, from 1812 up to this very year.