There was a little extra solemnity when contralto Sara Couden floated the first notes of “Father of Heav’n,” in Philharmonia Baroque Orchestra’s performance of Handel’s Judas Maccabeus. Maybe it was the orchestra’s “Jews and Music” project, or just Music Director Nicholas McGegan’s mellowing, but this commemoration of the Feast of Lights conjured the feeling of a religious gathering. The singer held the moment suspended through a smoothly executed messa di voce (crescendo-decrescendo), and when the orchestra fell into the main tempo, there was give and take between them and the singer.

In the occasionally didactic world of “historically informed performance,” McGegan has always prized flexibility and dramatic immediacy, as Saturday’s performance in Berkeley’s First Congregational Church showed. He gave the singers their time and they rewarded him and the audience with superbly characterized performances, even though Judas doesn’t dwell on plot details or character interactions. Several times, he leaned over the podium to listen carefully to the singer. You had the sense that he was facilitating, rather than leading the performance, though his hand gestures were as expressive as ever.

If you were to spot check this show against the one that the orchestra recorded the last time they played this score, 27 years ago, you’d find some slightly faster tempos then, along with a lighter, brighter choral sound. (The Philharmonia Chorale hadn’t been founded and the UC Berkeley Chamber Chorus collaborated with PBO on the recording). But the basic interpretation hasn’t changed radically — for example, decisions about the score are the same: the male part of the duet “Oh never, never bow we down,” originally given to the Israelitish Man, was sung here by Judas, a change made by Handel during or shortly after the first performance. It’s just that the maturation process has made the music seem more natural and inevitable. 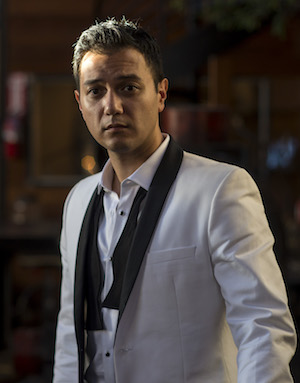 Even decades ago, McGegan was a leader in casting musicians who defied the stereotype of “early music singer.” There was judicious use of vibrato in Saturday’s performance, and the voices were full and strong. Tenor Nicholas Phan, the most recognizable name on the bill, has both a deft touch with strikingly clear declamation — no need to refer to the program to understand what he’s singing — and a ringing, heroic tone when needed. “How vain is man” was sure-footed and lightly voiced, while the call to battle “Sound an alarm” was commanding and urgent.

William Berger, as Judas’s baritone brother, Simon, can show finesse, but his purpose here was as cheerleader for team Judea, a role he embraced with gusto from “Arm, arm ye brave,” which breaks through the melancholy of the first scene and surges with D-major optimism, to leading the triumphal celebration that closes the work.

Couden was an expressively varied Israelitish Man, featuring some impressively rock-solid low notes (and an unforced upper register as well). Animated in her interpretation, she engaged the audience with a warm personality. To soprano Robin Johannsen, the Israelitish Woman, were handed the most extensive runs and coloratura, which she handled with ease while also spinning fine legato phrases in arias such as “Come, ever smiling liberty.” Kudos also to Jacque Wilson as the messenger and to trumpeter Dominic Favia for negotiating the difficult solo in “With Honour let desert be crown’d” with grace.

The orchestra, needless to say, was brilliant throughout, led by a full, rich string section, always the bedrock of this orchestra. The Chorale was superbly balanced throughout but with satisfying weight to the sound.

Despite its holiday theme and undoubted musical brilliance, Handel’s Judas Maccabeus is not a regular part of the December concert scene. It’s reappearance on the Philharmonia Baroque Orchestra schedule is a welcome addition. Let’s hope it won’t take another quarter century for it to return.