The Tokyo String Quartet's personality has shifted over time, but through the ensemble's nearly 40 years of existence its technical panache and its fondness for minutely thought-out interpretation have remained in consistently high repute. At Berkeley's Hertz Hall Sunday afternoon, under the auspices of Cal Performances, the Tokyos took on a juicy all-19th-century program with what it seems distressingly inadequate to call predictable excellence.
You knew it was going to be good — at least, I and the rest of the packed house had every reason to assume so — and the open questions were all ones of emphasis. Would we be blown away by unanimity or by individual sounds, by knife-edge precision or by sheer power, by dense sonority or by transparency? Thoughtfully, the quartet provided a little something for everyone.

The Tokyos' new recording of Beethoven's Op. 18 quartets was issued only a few months ago (Harmonia Mundi 907436; you can listen to the CDs online). The ensemble's performance of the G-major second quartet of the set had the high polish you'd expect of something recently prepared for the studio. But it was the sort of playing in which gleaming perfection is subsidiary. The ensemble tautness, the meticulous articulation, and the ringing chordwork were marvelous in themselves, but the focus was on the musical argument of a deceptively tricky quartet.

Op. 18/2 tends to feel somewhat flippant by the standard of the set. There's no dramatic set piece like the tragic slow movement of No. 1 or the "Malinconia" of No. 6, no vehemence to match that of the popular No. 4, nor lyricism to compare with that in Nos. 3 or 5. It's a skittish piece, the most Haydnish of the bunch, and one in which Beethoven follows Haydn's lead in letting superficially fluffy material evolve rapidly in unexpected and alarming directions. 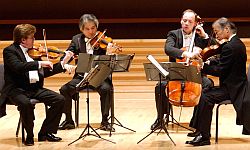 That sort of thing the Tokyos' performance brought out admirably. The first movement's development section, for example, is an early case of Beethoven letting a piece turn down an alley and run on until it's reached an impasse, at which point the composer ex machina sets things straight. The development slips leisurely into strict counterpoint, but then the mood darkens, and the counterpoint grows rapidly hairier and more precarious. The music breaks off abruptly and the quartet finds its way, first tentatively and then with a palpable rush of relief, back home.

In the Tokyos' hands, the entire sequence of moods, from initial ease to growing perplexity and anxiety through to hope and then triumphant return, was made vivid. (And never has the way Beethoven then suffuses the recapitulation with extra counterpoint, as though some of the edgy energy of the development had been captured and repurposed, made more evident sense.) For that matter, the players conspicuously enjoyed themselves in Beethoven's counterpoint throughout the work, most noticeably in the daffier canonic episodes of the finale.
Nuances Still Being Resolved
The program was in chronological order, with Schubert's late A-Minor Quartet following the Beethoven. Although that made for an unusually long first half, the players seemed unwearied. All the same, the performance seemed less settled and less detailed than that of the Beethoven.

In some ways, mind you, that's a welcome development. When the Tokyos were recording the late Schubert quartets for RCA, in the late '80s, their interpretations had been refined and buffed to the point where every lovingly worked-out detail was foreordained. I remember having heard them play the A-Minor Quartet around that time and remarking on one big rubato in the third movement: magnificently unanimous, a seriously staggering feat of quartet playing, but exactly the same three times through. (Breaking in on a broadcast performance of the same piece some months later, when I hit that spot I knew immediately whose recording was being aired; it was unmistakable.)

Two first violinists, one cellist, and 20 years further on, the idea of that rubato was still there, but the hair-raising unanimity and repeatability wasn't. I admit to finding myself both relieved and a bit disappointed. For, however disquieting the phenomenal gloss of those RCA recordings may have been, they were plain unbeatable as quartet-playing. Sunday's performance, by contrast, bore signs of matters still being hashed out among the players.

There was the question of vibrato, for one. The Tokyos availed themselves frequently of nonvibrato tone in the Schubert — more than is usual, certainly much more than I've heard them do before. In the obvious places (the second violin at the very opening, for example), it made perfect sense. But first violinist Martin Beaver had recourse to it many times in the first three movements, and it was not always attractive. It sounded contrived — a sudden, unaccountable flattening out of the sound that must have been intended as expressive emphasis but that all too often didn't come off as such.

At the other end of the scale, Beaver's vibrato additionally became a shade strident and overwide under pressure, which I hadn't noticed in the Beethoven. All the same, the performance was full of glorious things, such as the Scherzo's trio, anchored and occasionally led by Clive Greensmith's velvety cello, and also the finale, shot through with Beaver's feather-light, insouciant bowing.
Inner Parts Made Clear
After intermission came Smetana's First Quartet, and the spotlight fell on founding Tokyo violist Kazuhide Isomura. If he hasn't the flashily individual timbre of a few better-known quartet violists, behind his plainspoken sound lies great strength as well as subtle intelligence. In the imperious opening solo he was fierce, gritty, more than a match for his colleagues. Later he brought a more plaintive note to the quieter solos. More impressive, though less obvious, was his deft enunciation of the ungratefully convoluted, relentlessly busy inner parts in the first movement's development and in the finale — a feat in which second violinist Kikuei Ikeda matched him. I don't think it has ever been quite so clear to me what's going on in there.

The second-movement polka had a winning gait and an impeccably brought-off trio section, with the violins wheezing nonvibrato, accordianlike, over the fidgety rhythm laid down by Isomura and Greensmith. Yet the crowning glory was the slow movement. Greensmith, warm and honeyed and heartbreakingly passionate, sounded as if he was channeling the Hollywood Quartet's Eleanor Aller. At least, I think you'd have to go back to its half-century-old recording of the piece to hear his equal.

The single encore proved ideal for dispelling the overpowering gloom of the Smetana's conclusion: the Vivace assai finale of Haydn's Quartet Op. 50/1. That giddy little whirlwind of a piece was taken at an exhilarating tempo and played with dazzling precision — up to and including the viciously stratospheric cello lick that Haydn doubtless threw in to tease the work's cello-playing dedicatee.