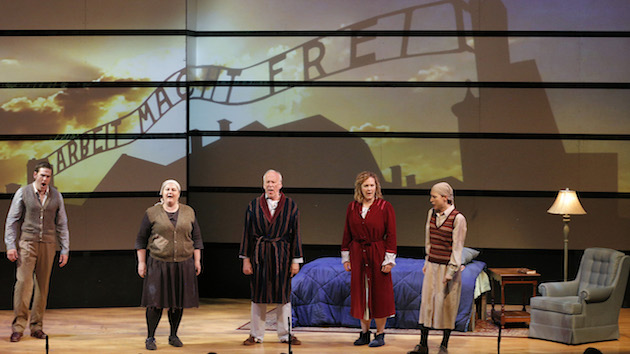 The Holocaust is a daunting theme for artists, even one like composer Jake Heggie who has made a career of tricky projects. His Out of Darkness, which tells the stories of two Holocaust survivors, saw its world premiere in Seattle and in San Francisco last Friday at the Conservatory of Music.

To call this a premiere is a bit of a misnomer; the opera is actually a reworking of two one-act operas (Another Sunrise and For a Look or a Touch) and a song cycle (Farewell, Auschwitz) written by Heggie and librettist Gene Scheer in 2007–2013 on commission from Music of Remembrance. Heggie’s music perfectly shows off the voices of a stellar cast and the playing of a delightful instrumental ensemble, but the uneven score, libretto, and stage direction prevent this opera from making a lasting impression.

The first act, “Krystyna” struggles most with its drama. In it, Krystyna Zywulska, torn between remembrance and moving on, recounts her experiences as a political prisoner at Auschwitz. It combines Another Sunrise and most of the songs from Farewell, Auschwitz, and the result is a long act bereft of conflict or dramatic arc. This is not helped by Erich Parce’s uninspired stage direction, which consists of purposeless stumbling around and agonized gestures, or by a stilted, repetitive libretto with inconsistent rhymes. The musical combination of the two works is also jarring. Another Sunrise, while ideally suited to Caitlin Lynch’s dynamic, many-textured voice, is a modern-sounding monody with slippery melodic lines and no set pieces. Broken up by the folksy songs of Farewell, Auschwitz, it becomes mere filler.

Musically, those songs are the highlight of the evening. As Zosha, Catherine Cook tells her story of being caught playing cards with ringing exuberance while the violin plays a catchy quotation from Paganini. Ava Pine’s young Krysia reflects on how her world has changed with “Why are you crying, Krysia?” a plaintive aria with gorgeous string accompaniment. Pine’s crystal tone, floated top notes, and messa di voce astonished and moved. Zosha’s, Krysia’s, and Manfred’s close-harmony trio about the typist “Miss Ziutka” also stands out for its lightness, quick beat, and fun slides, though its placement in the act seems arbitrary. 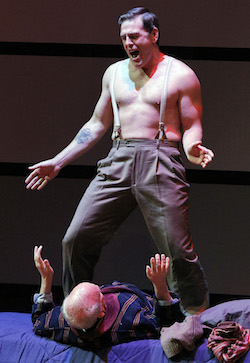 For the second act, “Gad,” the focus switches to a much-ignored topic: the persecution of homosexuals in Nazi Germany. Baritone Robert Orth plays Gad Beck, a gay Holocaust survivor. Vocally, this is luxury casting, since Gad’s role is almost entirely spoken, but Orth ably meets the dramatic demands of the part.

The singing is done by the ghost of his lover Manfred, touchingly played by baritone Michael Mayes. Mayes inhabits a range of musical styles and emotions, moving from the swinging “Golden Years” celebrating Berlin night life (with a thrilling clarinet-masquerading-as-saxophone solo by Laura DeLuca) to the harsh, dissonant “Story of Joe,” which tells of the brutal torture of a fellow gay prisoner.

Parce’s direction is better here: The blocking is natural, even as Manfred jumps onto the bed or collapses on the ground. Gad and Manfred share a palpable connection, and their dance together at the close of the act brings hopeful light to a dark story.

But that’s not the end. In Mozartian fashion, all the characters from both acts assemble for a heroic finale about the triumph of unity, music, and freedom. Gad and Krystyna certainly triumphed, finding life and meaning after years of suffering. So did the cast and the Seattle-based orchestra (pulled almost entirely from the Seattle Symphony), who played at the highest level of technical precision and artistic expression under the baton of Joseph Mechavich. Heggie and Scheer’s opera, however, does not succeed as a completely satisfying work of music drama. 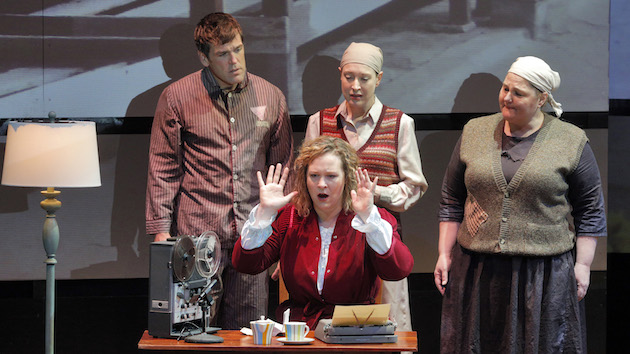